Earnings Season: Off and Running

On your mark, get set: Fourth-quarter earnings season is about to commence. A busy week of corporate earnings kicks off today with bellwether banks. But be forewarned. In the race to impress Wall Street, many companies attempt to “game the ref.”

A company “wins” the game and enjoys a higher share price by posting unexpectedly positive numbers. But winning the game isn’t much use in predicting a company’s future competitiveness and cash flows.

With these caveats in mind, what can you expect as fourth-quarter 2019 earnings season gets underway? 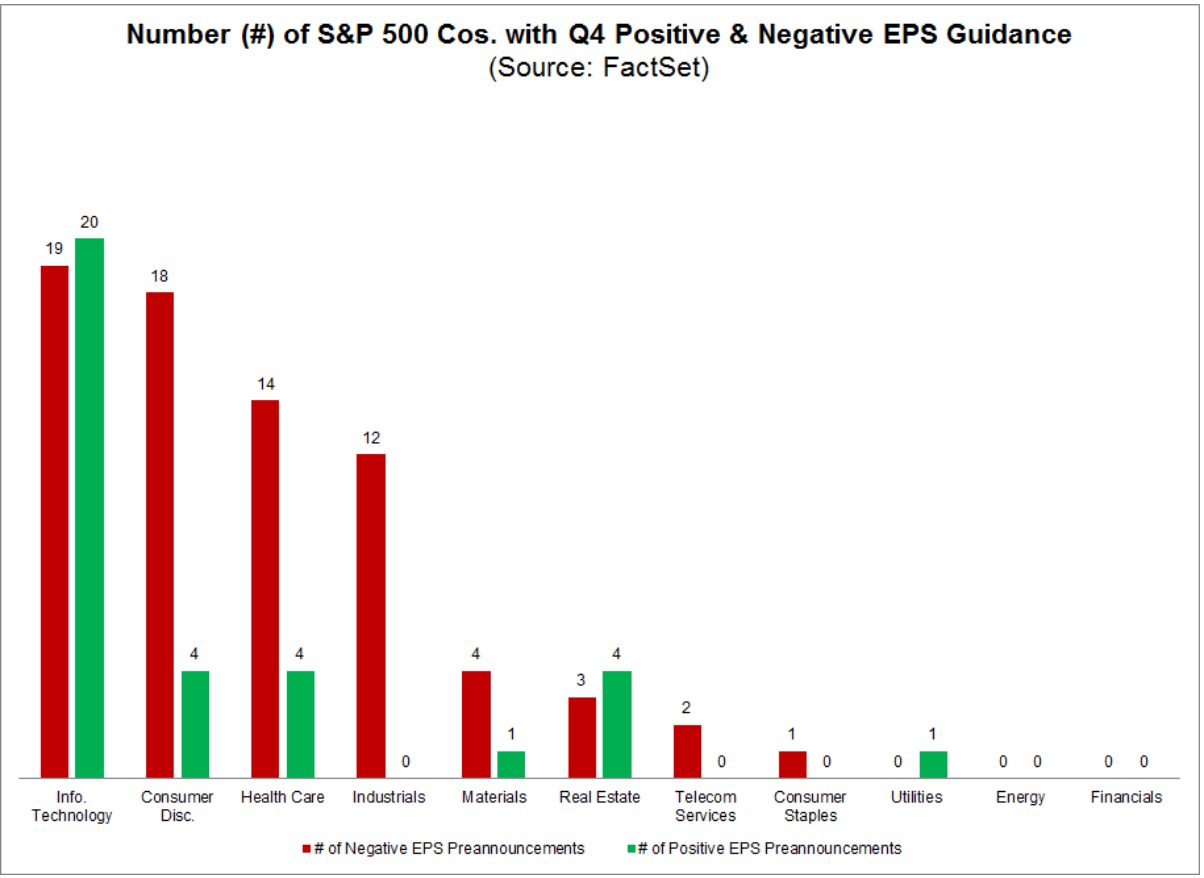 The Information Technology sector is the only sector in which analysts have not lowered earnings expectations (in aggregate) since the start of the quarter.

Energy is in the midst of a prolonged slump. Because of the fracking revolution, the United States has surpassed Saudi Arabia to become the world’s largest crude oil producer. However, over the long haul, the net effect has left global markets sloshing with an excess of cheap crude, which in turn weighs on oil prices. That hurts the bottom lines of indebted energy companies. The following chart tells the story:

With financial pressures bedeviling the balance sheets of U.S. shale companies, many are trying to drill their way out of their dilemma. Others are trying to boost margins by slashing costs and enhancing drilling efficiency. The result? Red ink and bankruptcies.

As of this writing Tuesday morning, the Dow Jones Industrial Average is flirting with 29,000, while the S&P 500 and NASDAQ both hover at all-time highs. Bullish sentiment is on the rise. But stocks are overvalued.

The forward 12-month price-to-earnings ratio for the S&P 500 currently stands at about 20. This disconnect between earnings growth and valuations will eventually catch up with investors.

Unless the gap between high valuations and projected weak earnings can be bridged, the stock market sits on precarious ground.

Headline risks loom large. The Middle East is a tinderbox ready to ignite. Tensions between the U.S and Iran have quieted down but probably not for long.

The 2020 presidential election also is riddled with hazards. Odds are, the Democrats will retain control of the U.S. House. But if either the Senate or White House (or both) flip to the “blue” team, investors will probably get spooked by the prospect of tax hikes and new regulations.

A “phase one” trade truce is supposed to get signed this week by the U.S. and China, but even if this deal is reached, it’s limited in scope. Existing tariffs already are hurting companies with greater overseas exposure, by increasing costs, lowering demand and squeezing profit margins.

The hunt for growth…

By definition, a “black swan” is a surprise. No one sees it coming. However, the investment road from here requires due diligence, not undue fear. You can still find reasonably valued growth stocks worth the risk, if you know where to look. Consider the booming marijuana industry.

The SAFE Act seeks to expedite the provision of financial services to cannabis companies by removing the fear of potential federal action against lenders. Once it becomes law, SAFE will provide the catalyst for a huge upward surge in marijuana stock prices. For our report on the best-positioned pot plays, click here now.

“Good earnings news can light a fire under a company’s stock… Investors, or at least traders, profit by correctly divining which companies will meet or exceed expectations and which will fall short. As for accounting firms, if they help a company meet its numbers—sometimes by ignoring, or even suggesting, some pretty dubious bits of bookkeeping legerdemain—then they can usually count on retaining the company’s lucrative auditing business and maybe pick up a consulting contract as well.”

Remain wary of consensus expectations, especially when it comes to earnings. Financial projections are often driven by self-interest, not empirical data.

Questions or comments? I’d love to hear from you: mailbag@investingdaily.com