A New Leaf for The Old South

The marijuana army is invading Dixieland, with the speed and ferocity of William Tecumseh Sherman.

Let’s start with Richmond, the former seat of the Confederacy and the current capital of Virginia.

As the result of elections last November, the state of Virginia has gone deep blue, with the Democrats enjoying a unified majority of the three political branches in the state, which already had a Democratic governor.

In a bellwether moment that is likely to reverberate throughout the South and indeed the country, the Virginia Senate on Tuesday passed a marijuana decriminalization bill, one day after the House of Delegates approved similar legislation.

It’s now up to a House/Senate conference committee to reconcile the differences between the proposals into a final bill to send to Gov. Ralph Northam (D). The governor has previously indicated his support for marijuana legalization.

Tobacco farmers in southern Virginia have been hit hard by declining sales of tobacco products, in a state where tobacco historically was the major cash crop. Now it appears that new cash crops, in the form of marijuana and hemp, will supplant King Tobacco.

As the chart shows, the versatile hemp plant is becoming a major growth industry, especially since it gained full decriminalization under the 2018 Farm Bill: 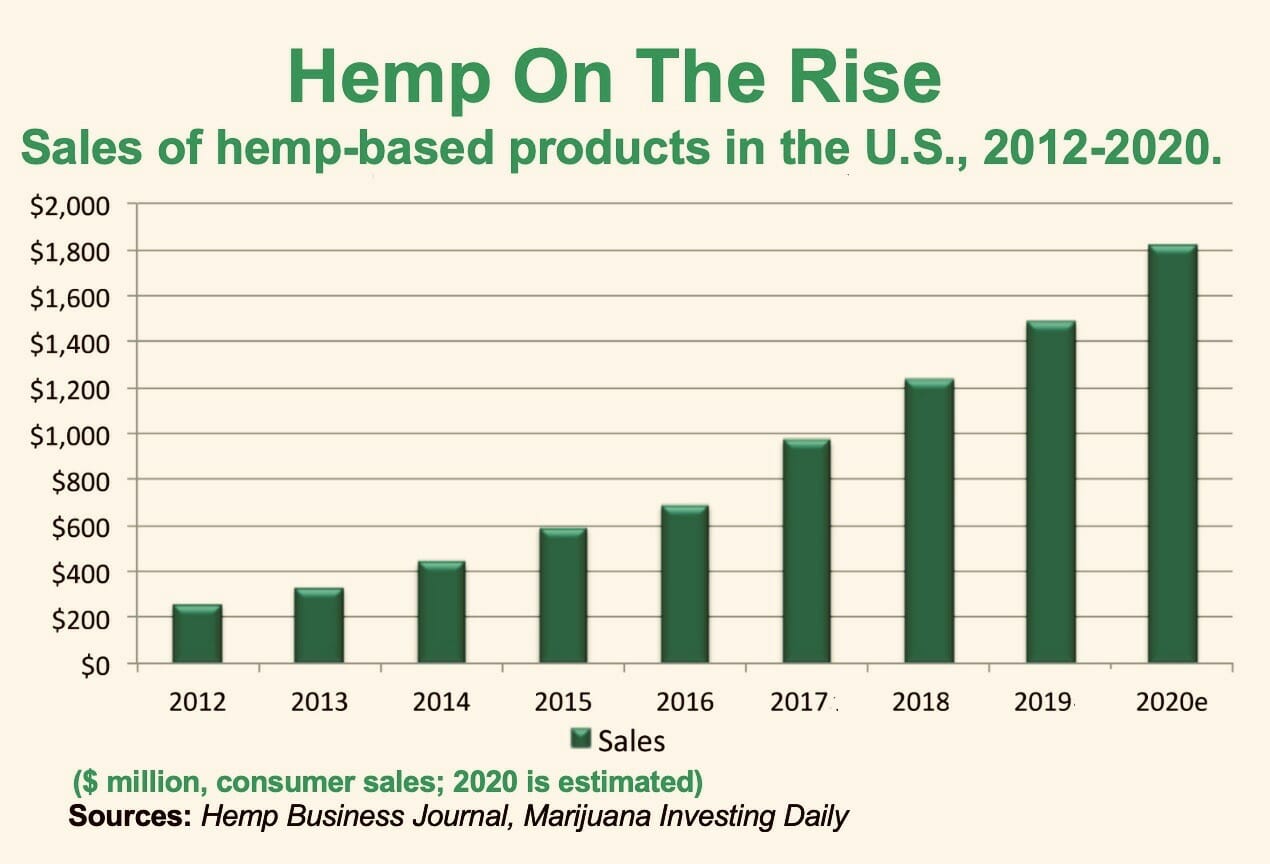 In addition to sales, hemp is generating an increasing amount of much-needed rural jobs, particularly in depressed farming communities in the South that seek revitalization.

Several other Southern states are following in Old Dominion’s footsteps, by adopting various marijuana legalization initiatives. The trend marks a significant cultural shift, because the region is known for being socially conservative. In recent developments in the South:

An official “cannabis panel” created by the Alabama legislature has recommended that the state legalize medical marijuana. Lawmakers are working on a bill.

A new bill in the Georgia Senate would legalize cannabis for adults 21+ in the state and would regulate the proceeds from sales.

The Kentucky House of Representatives passed a resolution calling on Congress to raise the THC threshold for hemp.

The Mississippi secretary of state certified a ballot measure to legalize medical marijuana. Several conservatives back the effort, including four Republican state representatives.

The Tennessee House has taken up a bill to decriminalize marijuana and allow counties to hold cannabis legalization referendums.

When it comes to marijuana legalization, the title of a famous Charlie Daniels’ song comes to mind: “The South’s Gonna Do It.” That’s important for investors to know, because it signals the sustained growth momentum of the marijuana industry.

Let’s see what else is happening throughout the United States.

California’s treasurer tweeted that she is “waiting for the Senate” to pass federal marijuana banking legislation. Access to capital markets remains a problem for marijuana companies.

Read This Story: Marijuana Lending: When Banks Just Say No

The Maryland House Judiciary Committee held a hearing on a bill to expand the amount of marijuana that is decriminalized.

The New York Assembly majority leader said it is “very likely” marijuana will be legalized this year.

Lawmakers in New York failed to legalize marijuana in 2019. However, Gov. Andrew Cuomo (D) stated last month that marijuana legalization is a priority for his administration and he vows to push hard to decriminalize recreational pot in the Empire State.

North Dakota activists are aiming to place a marijuana legalization measure on the November general election ballot rather than the June primary one.

One of two competing Oklahoma proposed marijuana legalization ballot measures has been cleared for signature gathering.

A Pennsylvania judge is set to decide whether a woman’s medical cannabis use disqualifies her for Section 8 housing.

The South Dakota House approved a bill to legalize hemp and marijuana legalization ballot questions have been validated by the secretary of state.

Vermont regulators signed a contract to use blockchain technology to track hemp.

White House Office of National Drug Control Policy Director Jim Carroll is set to discuss marijuana issues with Mexican officials during a visit to the country this month.

Sen. Bernie Sanders (I-VT), a presidential candidate, is reiterating in campaign speeches his pledge to legalize marijuana on the federal level. Sanders won the Democratic primary in New Hampshire on Tuesday.

Rep. Glenn Grothman (R-WI) tweeted: “After finally legalizing industrial hemp, we still face a few challenges. I’m happy to join a bipartisan group of lawmakers, as well as Wisconsin agriculture groups, to ensure our farmers get the best deal possible when growing this crop.”

The Senate criminal justice reform bill that includes the Marijuana Justice Act’s provisions got one new cosponsor for a total of one.

The House bill to shield military veterans from losing benefits over state-legal marijuana use got two new cosponsors for a total of 16.

The House resolution calling on Congress to apologize for the War on Drugs got one new cosponsor for a total of 21.

Looking to make money on marijuana legalization? For our team’s latest research on the most profitable pot stocks, click here.