Coronavirus: Looking a Black Swan in the Eye

This morning, I heard a cable news pundit refer to the coronavirus as an “unexpected black swan.” I found myself yelling at the TV set: “A black swan is by nature unexpected, you nitwit.”

As investors stare eye-to-eye with the distinct possibility of a black swan, let’s get our definition straight.

A black swan is a shocking surprise that triggers catastrophic consequences. Examples include the September 11, 2001 terrorist attacks and the 2008 financial meltdown. Swans are usually white, of course, and black versions of the bird are rarities. Hence the metaphor. No one has modeled a black swan event in their projections, nor have they prepared for one.

Whether the coronavirus epidemic is a black swan, or a manageable emergency that will soon pass, remains unclear. But one thing is clear: the damage of the outbreak is significant and worsening. In addition to the cost in human lives and suffering, the coronavirus is clobbering global economies and markets.

Global stocks were dragged lower last week not by thundering pronouncements on trade or economic policy, but by a microscopic pathogen. Despite occasional bursts of optimism that the coronavirus has been contained, reports continue to surface that the epidemic is rapidly spreading.

In pre-market futures trading this morning, the three main U.S. stock market indices were all poised to open deeply in the red.

China currently says coronavirus cases are tapering off, but Beijing has lost credibility due to the dissembling and foot-dragging of its officials. No one quite believes China’s reassurances about the epidemic. Meanwhile, the number of cases are surging elsewhere, with outbreaks worsening in South Korea, Iran, Italy and Lebanon. As of this writing on Monday, 34 cases were reported in the U.S., with more expected.

Bellwether Apple (NSDQ: AAPL) last week slashed its revenue guidance because of lower demand for its products in China. The consumer tech giant has been shuttering stores on mainland China, which is fueling worries that the fast-spreading coronavirus will dampen China’s economic growth and the world’s. Silicon Valley is especially vulnerable right now, because it heavily depends on China for sales, manufacturing and components.

The damage we’re witnessing from the coronavirus is probably just the tip of the iceberg. Research firm FactSet (the data provider for Investing Daily) in recent days has reported that an increasing number of managers on fourth-quarter earnings calls are citing the coronavirus as a negative factor weighing on future guidance.

China is trying to get in front of the crisis. The country is banning travel, quarantining entire cities, building massive treatment centers, and launching a crash program to develop a vaccine. The country also is taking economic measures.

China’s central bank last week slashed its benchmark lending rates, reducing borrowing costs in an effort to stimulate the economy and offset the deleterious effects of the virus.

China sneezes, the world gets a fever…

This confluence of trends produced a bad week for stocks, although the three main U.S. indices remain in positive territory year to date (see table). 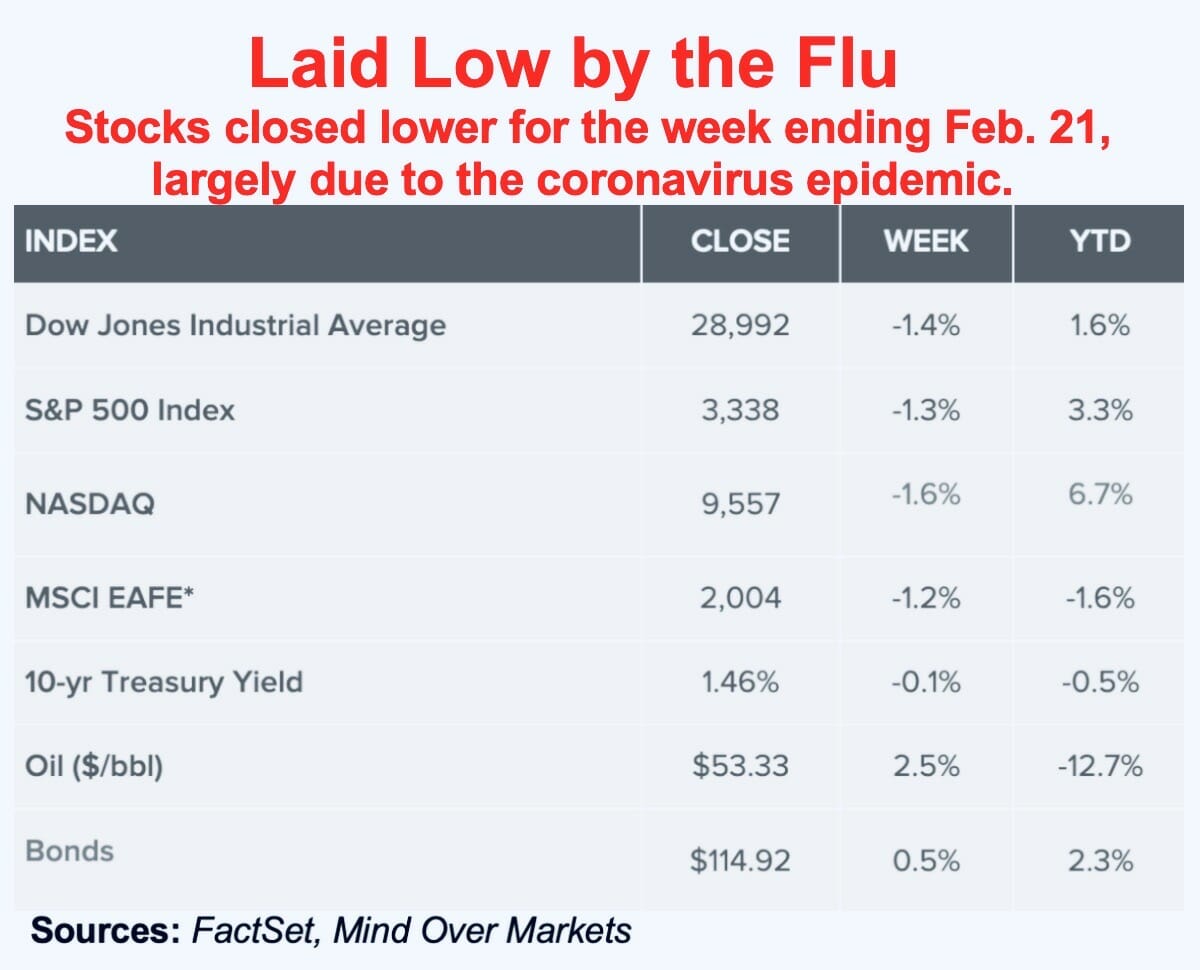 Stocks reached new all-time highs last Wednesday and the rally probably would have continued, had it not been for the seemingly inexorable spread of the coronavirus. Unemployment remains low, inflation is muted, interest rates are low, wage growth is rising, and the economic expansion continues (albeit fitfully).

Regardless, you should brace yourself for a rocky road ahead. The average age of a bull market is 57 months (4.7 years). This bull run has lasted nearly 11 years, the longest in history. It can’t last forever.

I may sound like a broken record, but we’re overdue for a correction. Over the past 12 months, there have only been four days in which the market has dropped by 2% or more, compared with an average of 16 days per year over the past 20 years. It’s been more than a year since the last 10% correction. Perhaps the correction started today.

It’s also worrisome that market leadership has narrowed. The largest five companies (by market capitalization) in the stock market now account for 18.1% of the S&P 500 index, above the long-term average of 12.5% and considerably higher than the 11% posted as recently as 2016.

The economic backdrop remains favorable for the continuation of this remarkably resilient bull market. But we’re likely to get disappointments along the way.

The docket is full this week of scheduled economic reports that will provide important clues as to the health of the economy (see the following calendar). 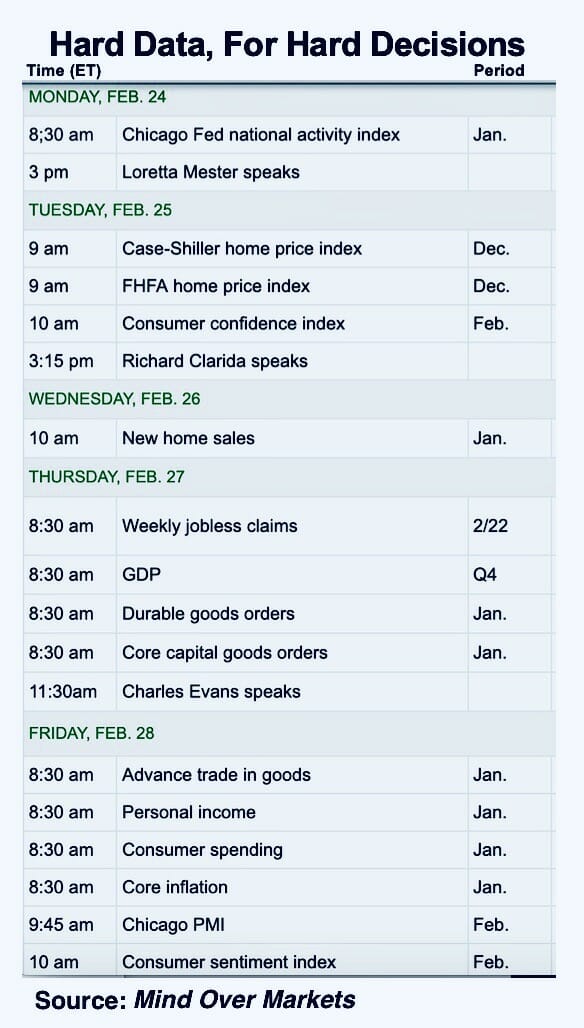 Keep a close watch on new home sales (Wednesday), weekly jobless claims (Thursday), and consumer spending (Friday). Each one of those crucial reports have the power to move markets.

The housing market has wobbled lately but seems on a path for sustainable growth, driven by favorable monetary policy and a confident consumer. Real estate stands out as an appealing sector now, especially as a buffer against trade war and coronavirus.

If you’re looking for a profit-making opportunity tied to real estate, read our special report by clicking here.

This bull market isn’t dead yet, but you need to get defensive. You should be rotating toward safe haven investments. For our list of bullet-proof stocks that pay high income, click here now.

In the meantime, whether the coronavirus is a black swan or a controllable crisis is a semantical discussion. Here’s what investors need to know: Stocks are vulnerable to a correction and the virus could provide the catalyst.