Pot Stocks: The Next Big Catalyst Is Imminent

“Ripeness is all” is a line in Shakespeare’s King Lear. It relates to the importance of timing. As of this writing, the marijuana industry is ripe for its next great surge forward.

The Secure And Fair Enforcement (SAFE) Banking Act is finally gaining traction in the U.S. Senate. When SAFE passes that chamber, marijuana stocks are likely to explode on the upside. Chances are good that President Trump will eventually sign a reconciled version of the bill. The time to buy pot stocks is now, ahead of the bill’s passage by the full Congress.

SAFE is federal legislation to expedite the marijuana industry’s access to banking services. Sen. Cory Gardner (R-CO), the bill’s leading Republican sponsor in the Senate, said Tuesday that his fellow senators are “close” to advancing the measure.

SAFE also would undercut the growing black market in marijuana sales and improve the industry’s financial transparency in California, Colorado and other legal cannabis states.

Banks are hesitant to lend to marijuana companies, because pot remains illegal at the federal level in the U.S. Bankers are worried about unforeseen liabilities. Lenders are by nature conservative and they fear a potential legal backlash against pot. The 2019 correction in marijuana stock prices has exacerbated this caution.

This grim reality underscores the industry’s need for legislation to bring marijuana into the financial mainstream. Some lawmakers, such as Gardner, are heeding the call.

SAFE made history in September 2019 when it became the first standalone cannabis reform bill ever to be approved by the U.S. House. Significantly, the measure passed along bipartisan lines.

However, SAFE has been mired in the Senate, where Banking Committee Chairman Mike Crapo (R-ID) has blocked the bill and offered revisions that many supporters of the bill consider unacceptable.

Marijuana industry leaders were losing hope about SAFE’s chances of passage, until Gardner’s strong words of assurance on Tuesday. Gardner said lawmakers are “close to finding common ground to getting everyone signed off to move this forward.”

“We need to get this all-cash economy into the disinfectant of sunlight, out of the shadows and get some transparency so we can put it into our financial system,” the senator said during a speech at the Credit Union National Association’s (CUNA) annual governance meeting in Washington, D.C. “It’s a challenge we have to rise to meet. We can’t ignore it.”

“Every day that Congress continues to ignore reality, unintended consequences pile up for legitimate businesses,” he said. “I sincerely appreciate CUNA’s support for the SAFE Banking Act and their work to pass this commonsense, states-rights approach to the legal cannabis question.”

As with many GOP senators, Gardner faces a tough re-election fight in November. He knows marijuana is a winning issue with his constituents. Colorado is in the vanguard of marijuana legalization and currently enjoys the substantial monetary benefits of marijuana, including job creation, tax revenue, and an influx of marijuana tourists.

Colorado Amendment 64, passed by voters in November 2012, legalized recreational marijuana effective January 2014. Medical marijuana was legalized in the state in 2000. As you can see from the chart, pot sales in Colorado are robust. 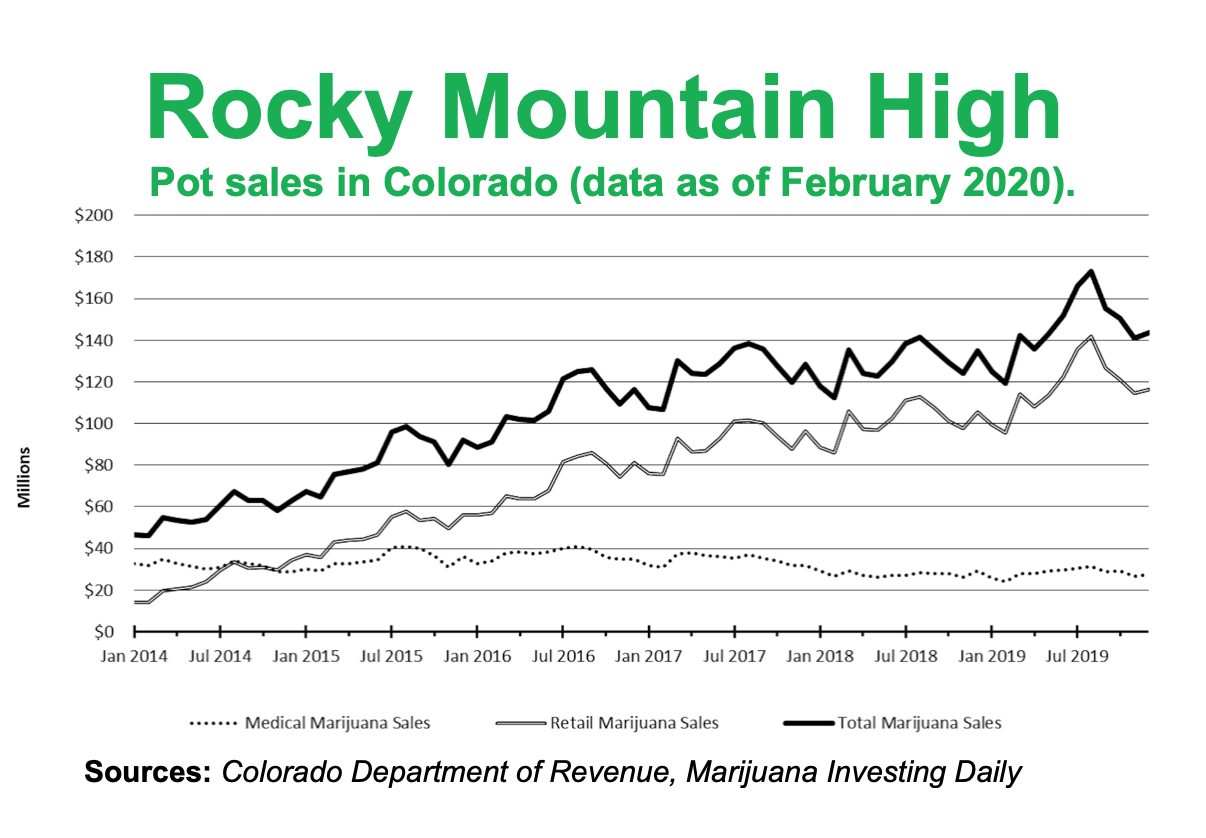 But the pot prohibitionists in Congress haven’t given up. Earlier this month, 12 GOP members of the House who voted against SAFE in that chamber wrote to Sen. Crapo, praising him for proposing a series of restrictive changes to the bill. The letter claims that marijuana can cause “IQ loss, increased risk of serious mental illness, and addiction.” (Health experts dispute those claims.)

“We thank you again for your examination and consideration of these important public health topics,” the anti-SAFE group wrote. “We remain opposed to liberalizing drug laws (including around banking), and we see these as some of our areas of greatest concern. We must protect our youth by preventing investment into companies that would prey upon them.”

Regardless, Gardner said that he, Crapo and Sen. Jeff Merkley (D-OR) have “made great progress on the details of the SAFE Banking Act.”

“We are working through some of the objectives Sen. Crapo has in terms of safety, research, and guidance. We’re doing it in a way that respects state’s rights, that respects the voters of the states, that moves forward on this,” he said. “I believe that in a matter of months we can have a vote on a compromise version in the Senate that will have the support of 60-plus of my colleagues and of the House of Representatives.”

The stars are aligning for SAFE’s passage. Last week, the American Bar Association endorsed the expansion of banking services to the cannabis industry.

If you’ve been waiting for the next big catalyst to propel pot stocks forward, the new momentum behind SAFE should cause you to rejoice. Investors need to act now, before the news bids up share prices.

Looking to make money on marijuana legalization? For our team’s latest research on the most profitable pot stocks, click here.