The Remote Economy Takes Off

The coronavirus outbreak has caused havoc in the stock market. During the last eight trading days in February, the Dow Jones Industrial Average dropped nearly 14%. Since then, it has bounced back and forth like a ping pong ball in a bingo hopper. Up 1,000 points one day and then down 1,000 points the next.

Most stocks are bouncing around with it. On February 14, Apple (NSDQ: AAPL) traded above $325. Two weeks later, it briefly dropped to $256 before rallying to close near $273. Just three days after that it was above $300 to get back to breakeven for this year. By now, investors would be excused for having a bad case of psychological whiplash.

Also read: Fear Factor: How to Ride Out the Coronavirus Panic

However, not all companies have been adversely impacted by the threat posed by the coronavirus. Due to travel restrictions and precautions against gathering in large crowds, a small subset of businesses are thriving. While the rest of the stock market is taking it on the chin, the three companies below are enjoying a surge in popularity.

One of the best places to catch whatever is going around is a restaurant. By the time your meal arrives at your table, it has been touched by several hands. In many cases, those same hands have been in contact with menus, dishware, and utensils from dozens of other tables thereby increasing the risk of transmission.

For that reason, many diners are deciding it is safer to eat at home rather than go out. However, they still want food from their favorite restaurants, which is where food delivery company Grubhub (NYSE: GRUB) comes into play. For a small fee, Grubhub will swing by your local restaurants and deliver a fully prepared meal to your doorstep. 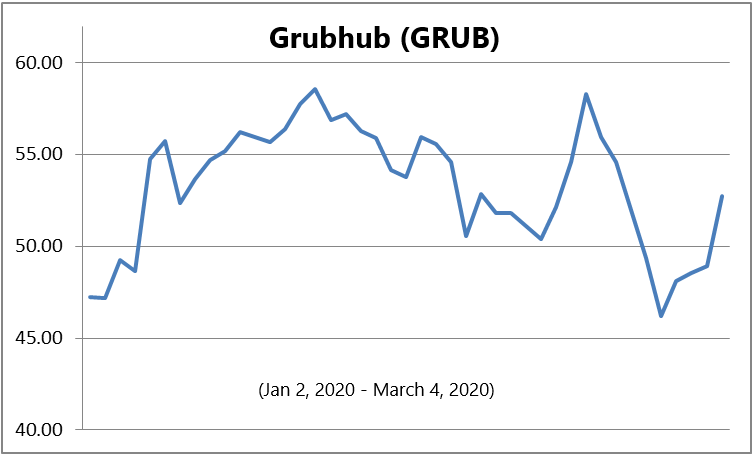 After peaking near $150 eighteen months ago, GRUB fell to $33 by last October. That’s because food delivery service was considered an extravagance for harried parents too busy to make dinner at home. Not anymore. GRUB shot up during the past week and has gained 12% this year as more diners decide to eat in rather than go out.

Another great place to catch the flu is a movie theater. The armrest to your seat is a veritable petri dish of bacteria and other contaminants. At the same time, you are surrounded by strangers coughing throughout the movie.

Rather than incur the risk (and expense) of a night out at the theater, staying home to watch a movie is a safer (and cheaper) alternative. That may explain why shares of Netflix (NSDQ: NFLX) are up 16% this year. 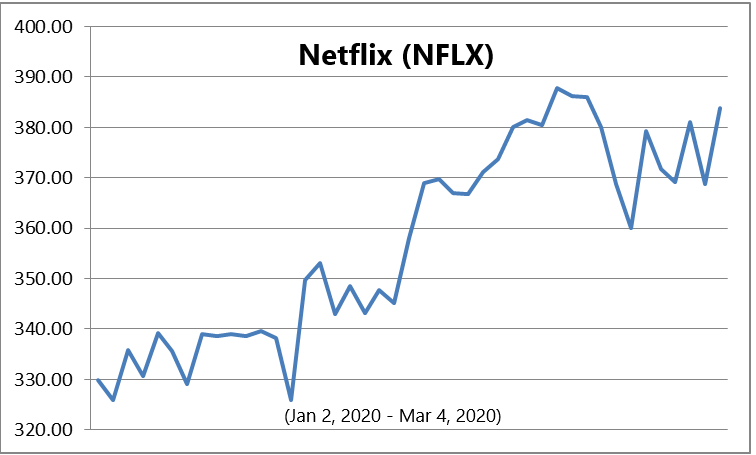 Netflix took a dive after Apple and Walt Disney (NYSE: DIS) announced the launch of their own video streaming services last fall. But it will take years for them to build up a customer base to rival Netflix. Meanwhile, Netflix has what those consumers want right now as coronavirus fears keep moviegoers at home.

One of the best ways to spread a virus is to have lots of people travel all over the world to attend business meetings in cramped quarters. That’s why many companies such as Ford (NYSE: F) have canceled business travel as the coronavirus spreads throughout Europe and North America.

Fortunately, those meetings can still be held thanks to video conferencing company Zoom Video Communications (NSDQ: ZM). At a cost considerably less than airfare and hotel rooms, Zoom can connect business people all over the world in a germ-free environment. 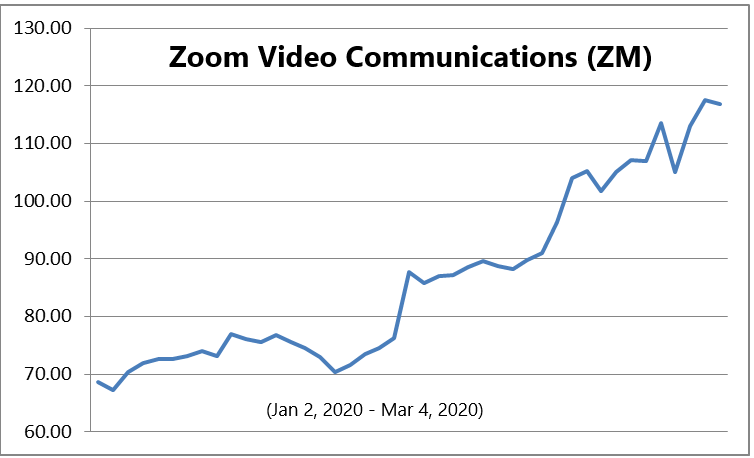 Zoom went public last April at $36 and quickly rose above $100 before falling back below $70 by the end of the year. Since then, the stock is on a tear gaining 70% so far this year. Even after the coronavirus is contained, many businesses may decide to stick with remote conferencing for the cost savings.

Like all disruptive events, the coronavirus outbreak will alter the paths of many businesses. For the three companies above, it represents an opportunity to gain new customers that may stay with them long after the outbreak is over. The longer it takes to contain the virus, the stickier those relationships will become.

We may only be in the early stages of the virus. If so, other companies and industries will have to adapt. How much longer until people stop going to the gym to workout, or discontinue attending sporting events until the virus is eradicated?

Nothing is off-limits. This week, Italy banned fans from attending all sporting events for at least the next month. When European soccer fans are prohibited from watching their favorite sport in person, you know the problem is getting serious.

As is always the case, this crisis creates an opportunity for innovative entrepreneurs. Money not spent at restaurants, movie theaters, and sporting events is money that can be spent in some other way. Yes, there will be many losers as a result of the coronavirus but there will be some winners, too.

Editor’s Note: As Jim Pearce just explained, in crisis there is opportunity. An opportunity you shouldn’t miss is a forthcoming event that will show you how to build wealth for a comfortable retirement.

Our event features renowned investment expert Jim Fink. As the chief strategist of Velocity Trader, Jim has perfected certain methods for using leverage that made him wealthy.

Jim Fink will explain how his scientific investing system pinpoints stock movements as small as 1%, before they happen, and then leverages those movements for whopping gains.

Jim already has used his system to deliver 20,747% profits to a small group of Investing Daily readers in less than five years.

To learn Jim Fink’s money-making secrets, secure your spot on our special event by clicking here.