Oilmegeddon: The Shockwaves of Crude’s Crisis

A “black swan” event finally brought the energy sector to its knees, and with it the broader stock market. But it wasn’t a drone missile attack, a Middle East war, or unconstrained oil supply. It was a microscopic pathogen dubbed COVID-19, aka the coronavirus, which continues to claim human lives around the world.

Oilmegeddon has arrived, courtesy of the flu.

Crude oil demand during this quarter is on track to post the largest decline on record, even worse that the slump that occurred during the great financial crisis of 2008-2009.

Oil prices are in free fall, dragging down the financial value of the entire fossil fuel industry. In fact, the energy sector is officially in a bear market.

The swoon of oil and gas stocks has put pressure on global equities. The willingness of stock investors to tolerate price-to-earnings ratios stretching into three and four digits has come to an end.

Read This Story: Do The Math! The Numbers Don’t Add Up

The number of coronavirus cases around the world now exceeds 100,000 and counting. In a minute, I’ll explain how these crisis conditions are presenting investors with a money-making opportunity. But first, let’s take a look at energy’s woes and why they matter to you.

Disaster in the energy patch…

We’re witnessing an unprecedented collapse in crude oil demand and prices, with dire consequences for the overall economy and stock markets. Oil prices have fallen 20% so far this year since the coronavirus outbreak took hold, with no bottom in sight.

If you’re an investor without exposure to the energy sector, why should you care about all this? Because the stock market and the energy sector are inextricably linked. For the last couple of years at least, the prices of equities and energy have moved roughly in tandem.

By Wall Street’s reckoning, rising oil and gas prices are a sign of health in the overall economy. All economic activity requires energy, whether to manufacture goods, operate machines, or provide transportation.

The U.S. spends $1.4 trillion annually on energy, accounting for 8.2% of gross domestic product. In the U.S., the energy industry supports more than nine million jobs directly and indirectly, which is over 5% of the country’s total employment.

According to statistics from Goldman Sachs (NYSE: GS), the energy sector accounts for one-third of S&P 500 capital expenditures and 25% of combined capex and research and development spending.

Crude oil is the most valuable commodity in the world. And right now, its price is cratering. 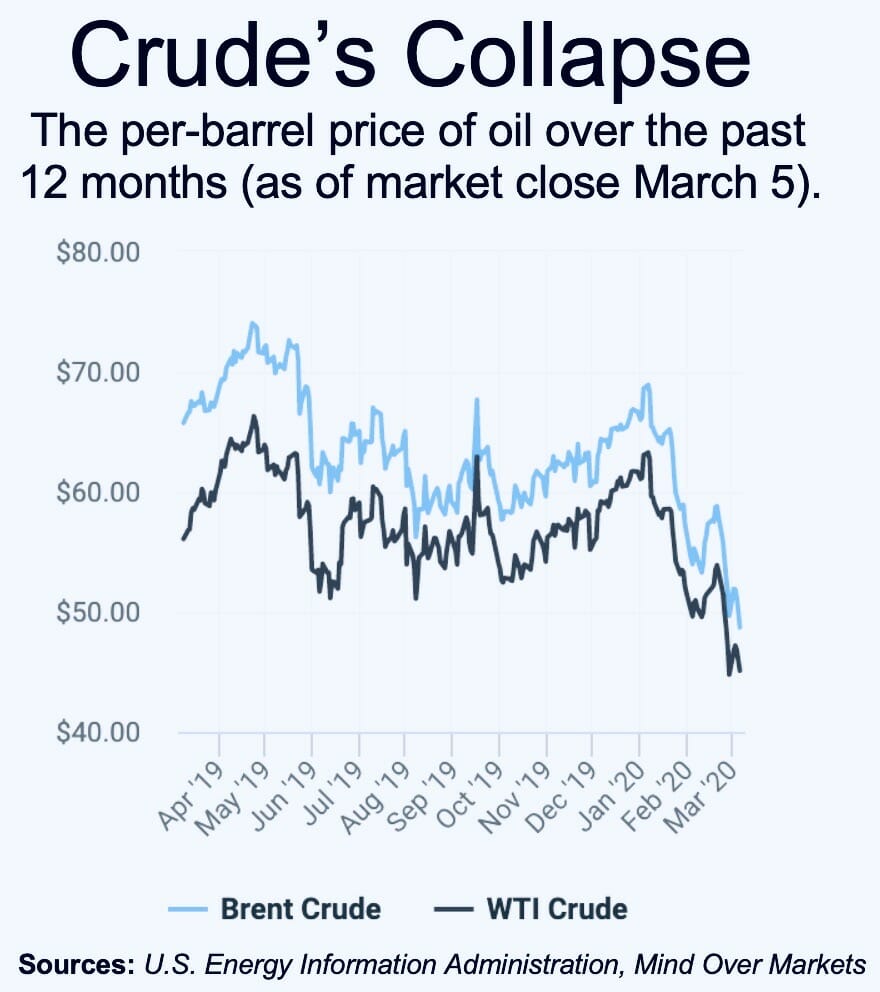 Research firm IHS Markit reported Wednesday that energy demand is plummeting and will continue to do so because of reduced economic activity caused by the coronavirus outbreak.

IHS Markit expects oil demand to plunge by as much as 3.8 million barrels per day (m/bpd) in the first quarter, to 96 m/bpd. Demand in the first three months of 2019 was 99.8 m/bpd. The firm says it’s the biggest drop in oil demand on record.

Due to epidemic-caused factory closings, quarantines, and sick workers, a wide range of industries are experiencing a sharp drop in activity. Airlines have been hit especially hard, with staggering multi-billion-dollar revenue losses, the scale of which is reminiscent of 9/11.

China’s economic growth, already at a three decade low, will slow further because of the coronavirus. The world’s biggest importer of crude oil suddenly needs a lot less of the stuff, prompting Beijing to reduce its March crude orders from Saudi Arabia.

Not surprisingly, the energy sector is rife with short selling. Hedge funds are preparing for tougher conditions in the beleaguered oil sector by increasing their bearish bets.

According to research firm S3 Partners, short sellers have added more than $460 million to their short-interest positions since the start of February. Year to date, short positions in oil have tripled.

As of this writing Friday, OPEC and its partners are meeting in Vienna to discuss additional oil production cuts to shore up prices. But OPEC members are disagreeing on just how much to cut. Many oil producing nations need higher oil prices to balance their budgets.

At the meeting on Thursday, OPEC announced a proposed 1.5 m/bpd of additional cuts. The idea calls for OPEC itself cutting by 1 m/bpd and non-OPEC partners such as Russia reducing output by 0.5 m/bpd.

OPEC said in a statement Thursday:

“The COVID-19 outbreak has had a major adverse impact on global economic and oil demand forecasts in 2020, particularly for the first and second quarters…the unprecedented situation, and the ever-shifting market dynamics, means risks are skewed to the downside.”

However, as of Friday, Moscow had not agreed to the deal.

Saudi Arabia, the de facto leader of OPEC, is trying to get its fickle partner Russia to go along. Ever the chess player, Russian President Vladimir Putin characterized current oil prices as “acceptable.” Putin is waiting for the last moment to announce Russia’s decision as to whether it will agree to the proposed cuts or stay on the sidelines.

In 1959, just before he announced his run for president, Senator John F. Kennedy gave a now-famous speech in which he noted that within the Chinese word for “crisis” were the individual characters for “danger” and “opportunity.” Ever since then, his observation has been a popular oratorical device.

Within the dangers I’ve just described, here’s your opportunity: as oil prices plummet, gold prices are soaring. Risk-on assets have become a roller-coaster over the past several days, prompting investors to flee toward the traditional safe haven of gold. The price of gold probably has further to run.

Geopolitical turmoil is on the rise, boosting gold’s appeal. The yellow metal maintains its intrinsic value regardless of a government’s ability to back its currency.

Gold is universally accepted around the world. When markets crash because of unexpected shocks, historically the price of gold has tended to skyrocket.

Gold miners look particularly appealing now, because they use operating leverage to exponentially profit from rising gold prices. Thanks to painstaking research, our investment team has pinpointed a promising gold miner that Wall Street is ignoring. This under-the-radar miner sits atop one of the greatest precious minerals bonanzas in history.

The time to invest in this gold mining play is now, before the rest of the investment herd catches on and bids up its share price. Click here for details.

Questions about crisis investing? Drop me a line: mailbag@investingdaily.com