This morning, I turned on cable news to get the mainstream media’s perspective of the market’s current woes. I almost did a spit take with my coffee.

The cheerful spin was surreal. I heard one pundit say that bargain hunters should jump into the stock market with both feet, because coverage of the coronavirus is hyped and the epidemic will quickly blow over.

As I write this column on Tuesday morning, the global death toll from the fast-spreading virus exceeds 4,000 and several countries are putting entire cities under quarantine. Pre-market futures trading indicates that stocks will open higher this morning, largely due to suggestions from the White House of a payroll tax cut to stimulate the economy. The phrase “dead cat bounce” comes to mind.

Also coming to mind is March 2008. During the financial crisis, Bear Stearns was circling the drain. But many television pundits insisted that the investment bank was just fine. A certain celebrity on CNBC (you can guess his name) said it would be “silly” for investors to take out their money. Actually, I distinctly remember that he was shouting. Here’s exactly what he said:

“Bear Stearns is fine! Do not take your money out. If there’s one takeaway, Bear Stearns is not in trouble. I mean, if anything, they’re more likely to be taken over. Don’t move your money from Bear. That’s just being silly. Don’t be silly.”

When those words were uttered, Bear Stearns stock was trading at $62 per share. A mere five days later, the firm underwent a mercy killing and was folded into JPMorgan Chase (NYSE: JPM) at $2 per share. The collapse of Bear Stearns triggered a domino effect that hastened the global financial meltdown. New owner JPMorgan discontinued using the once-venerable Bear Stearns name, which had become synonymous with greed and mismanagement.

Here’s my point: During the current crisis, tune out the spin from TV blowhards and government shills. Remain coolly rational and analytical. Stick to your long-range goals. Don’t panic but, by the same token, don’t gloss over genuine threats.

Here’s a genuine threat that no one on television likes to talk about: unsustainable public and private debt. As if you didn’t have enough to worry about, the global debt bomb just got closer to detonation. Let’s look at the extent of the danger and what investors should do about it.

Economists at JPMorgan Chase are warning that the adverse economic and financial consequences of the coronavirus are pressuring credit and funding markets, with major defaults looming ahead.

Diminished demand and supply chain turmoil already are creating a cash flow crunch for many businesses, making it difficult for them to service their debt burdens. This dynamic especially hurts smaller companies in the hard-hit travel and lodging industries.

Oil prices have plunged amid a new crude price war, threatening many indebted energy companies with insolvency. Yesterday witnessed losses of 20% to 50% among the shares of independent oil and gas company stocks.

“If these shifts in credit and funding markets are sustained over the coming weeks and months, especially in the issuance space, credit channels might start amplifying the economic fallout from the Covid-19 crisis…[unless] credit support by central banks and/or governments is broad, fast and direct, we note credit markets are facing an increased risk of the cycle turning with a lot more downgrades or even defaults over the coming months.”

Also last Friday, a derivatives index that gauges the perceived risk of corporate credit soared by the most since at least 2011. At the same time, energy company bonds and loans are falling further into distress as crude oil prices crash.

Americans are getting deeper into hock…

It’s not just corporate debt. Total household debt in the U.S., including mortgages, auto loans, credit card and student debt, climbed to $14.15 trillion in the fourth quarter of 2019, eclipsing the previous peak at the height of the great recession in Q3 2008 by $1.5 trillion in nominal terms (see chart). 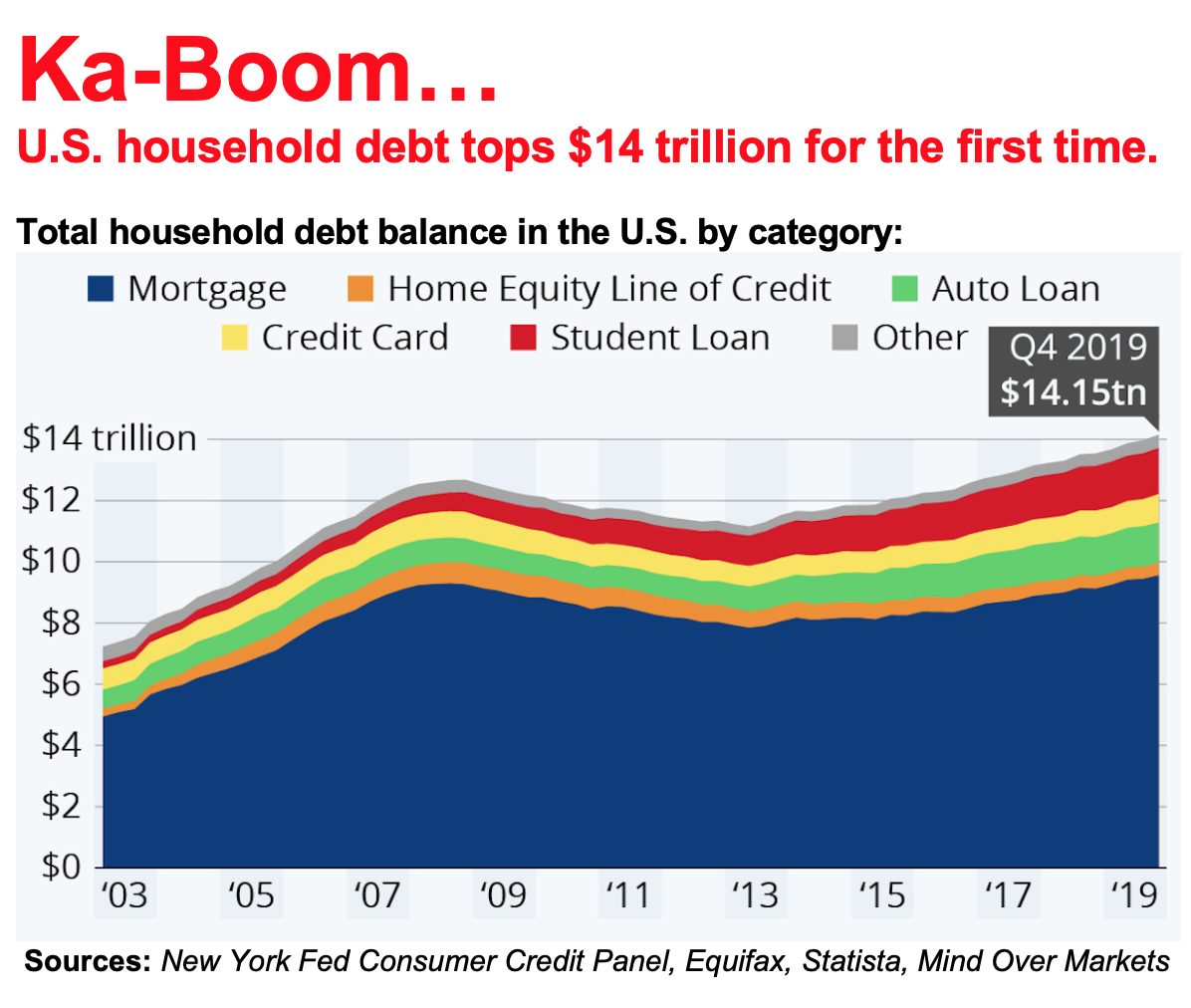 That’s according to the Federal Reserve Bank of New York’s latest Report on Household Debt and Credit.

Then there’s Uncle Sam’s debt, which has mushroomed to monstrous levels because of the 2017 tax cut.

The non-partisan Congressional Budget Office (CBO) recently projected that the federal budget deficit will hit $1.015 trillion this year. Federal deficits are expected to average $1.3 trillion per year between 2021-2030.

The coronavirus has made a recession this year more likely. A recession, in turn, could trigger a debt crisis. Low-grade corporate debt is a ticking time bomb, a huge risk that gets almost no coverage by the financial media.

Read This Story: Coronavirus: Looking a Black Swan in the Eye

During the era of ultra-low interest rates that followed the Great Recession, corporations loaded up on debt. But instead of using that money to invest in organic growth, most of these borrowers launched share buyback programs or funded mergers.

This myopic decision-making was repeated in the wake of the 2017 tax cuts, when corporations used their windfalls mostly to buy back stock and not for internal investments or to pare down debt.

In addition to low interest rates, companies have enjoyed other incentives to borrow. Interest costs are tax-deductible, so in essence, the U.S. government has been subsidizing corporate America’s debt spree.

The stigma of lower-grade debt has diminished over the past 10 years, echoing the go-go 1980s when Gordon Gekko-type corporate raiders used junk bonds to finance leveraged buyouts. The crash of 1987 ensued.

Because of the Federal Reserve’s quantitative easing since the 2008-2009 financial crisis, government bonds have sported low yields, prompting investors to seek higher yields via ever-riskier bonds. Companies have exploited this demand.

The confluence of these trends has resulted in a preponderance of BBB rated debt. There’s currently $3 trillion in outstanding U.S. debt rated triple-B, up from $1.3 trillion five years ago and $686 billion a decade ago. That’s the most ever for companies rated triple-B.

Triple-B debt securities are the last rung on the ladder; they’re the lowest-quality debt that qualifies for investment-grade status. A downgrade to double-B pushes a company’s bonds into the high-yield junk territory. In a recession, many of these highly leveraged firms could fall victim to a wave of downgrades and defaults.

Since the 2008 global crisis, when big banks sought federal government bail outs, the Federal Reserve has been steadily chipping away at the capital requirements that were put in place to prevent a repeat. Bankers say these rules are burdensome red tape. There’s another reason bankers hate stricter capital requirements: they compel banks to limit stock buybacks and dividend payments.

In the autumn of 2008, terrified bankers went to Uncle Sam with their hats in their hands. They’ve forgotten this inconvenient truth. Unfortunately, so have many investors (and taxpayers).

However, in the next downturn, looser capital requirements could leave the economy more exposed to another meltdown. Meanwhile, with interest rates already low, the Fed won’t have many tools at its disposal.

The Fed last week implemented an emergency rate cut, to help offset the effects of the coronavirus. It probably won’t do much good. Investors seem to know this, as they flee risk-on assets for safe havens such as gold. You should do the same.

The hedges portion of your portfolio should total about 25% of assets. I define “hedges” as precious metals (i.e., gold and silver), real estate investment trusts (REITs), and commodities, among other investment classes.

Also increase your exposure to equities in historically stable sectors, notably utilities stocks. Dividend-paying utilities have demonstrated the ability to weather downturns. Their solid balance sheets and insulation from geopolitical risk make them effective shelters from the storm.

Stay cautious. I’m seeing a lot of similarities between March 2020 and March 2008. As Mark Twain said: “History doesn’t repeat itself, but it often rhymes.”

Questions about portfolio protection in these fraught times? Drop me a line: mailbag@investingdaily.com