In these uncertain times, you should seek solace in marijuana…not necessarily to get high, but as a way to make money. Canna-business is better insulated than most other industries from risks such as the coronavirus pandemic, making the right pot stocks “defensive growth” plays now.

It’s an investment truism: invest in products that people will always want, in good times or bad. And when it comes to providing a product that people crave the world over, recreational marijuana passes the test.

The marijuana sector was volatile in 2019, but not in relation this year to the broader market. So far in 2020, the equity and energy markets have been subjecting investors to convulsive rides on almost every trading day. Many analysts are calling for a global economic recession this year.

The Dow Jones Industrial Average and the S&P 500 are now officially in bear market territory, which means the indices have fallen at least 20% from their recent highs. The dizzying skid in stocks began about three weeks ago and ended the 11-year-old bull market.

The coronavirus has been the trigger for steep stock market declines, but global economies and equity markets already were under pressure even before the pandemic hit.

As headwinds plague the global economy, the marijuana sector enjoys tailwinds. There are now 1,444 cannabis-related bills moving through state legislatures and Congress for 2020 sessions. The momentum for legalization is unstoppable.

Here’s what’s new over the past week, in terms of federal and state legal developments affecting marijuana. As investors in other sectors panic, the trends for marijuana continue to look encouraging.

The U.S. House Veterans’ Affairs Committee scheduled votes on two marijuana bills for today. One would let Department of Veterans Affairs doctors issue medical cannabis recommendations, while the other would direct the department to expand marijuana research.

The House bill to remove roadblocks to marijuana research got one new cosponsor for a total of 20.

California Republican congressional candidate Nikka Piterman tweeted: “I wanna legalize, commute sentences for nonviolent crimes plus give clemency for 20g of marijuana on flights… so if Americans come to Cali they can take a piece home with them.”

Virginia Democratic congressional candidate John Lesinski tweeted: “The General Assembly in Virginia is decriminalizing possession of small amounts of marijuana and has begun a process to expunge criminal records of the offense. I applaud this legislation. We need to stop clogging up our courts and ruining lives over marijuana possession.”

A proposed Arizona marijuana legalization ballot measure is being endorsed by the former backers of a rival campaign.

The following chart shows the huge amounts of marijuana money at stake in California: 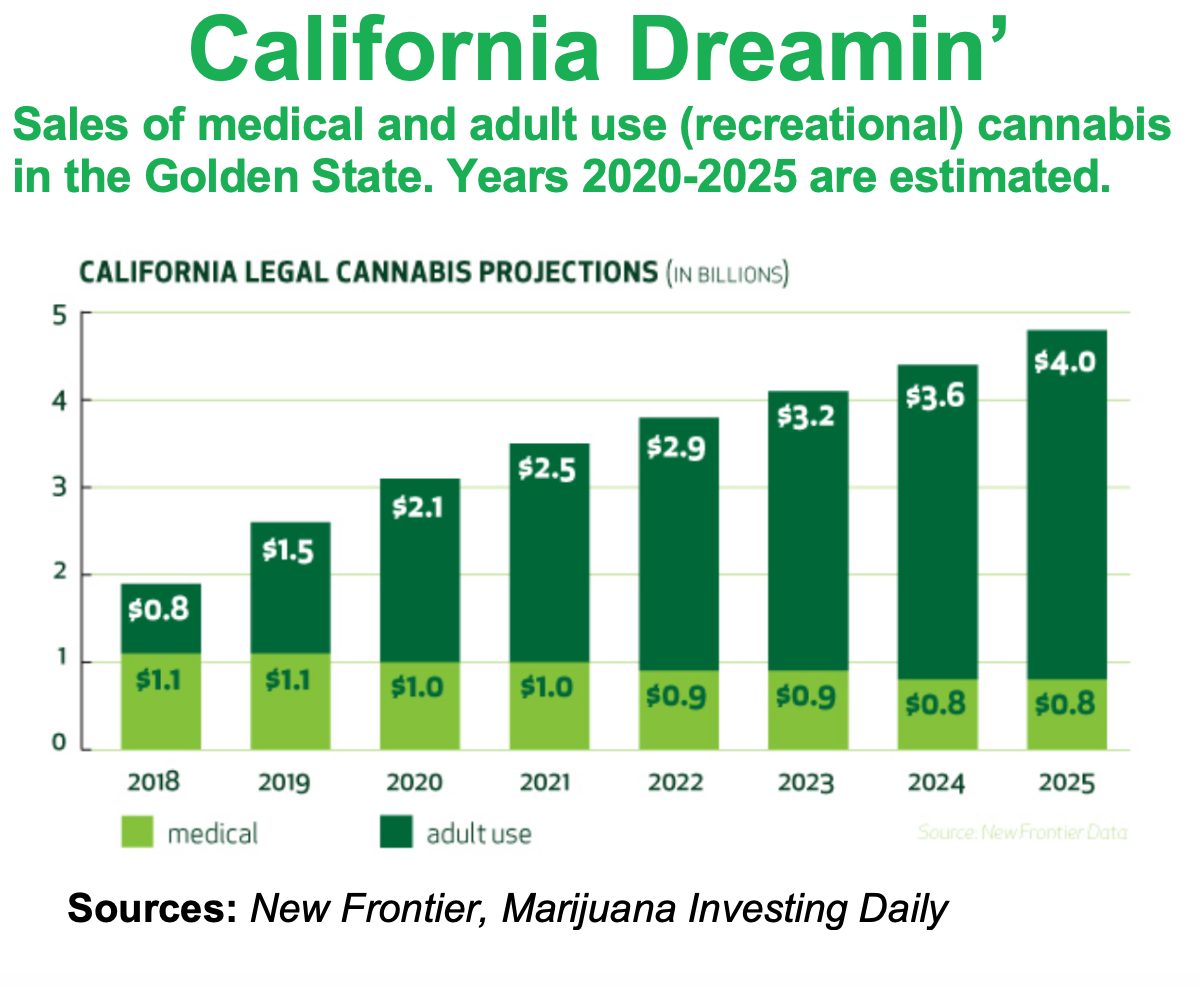 The Iowa House of Representatives passed a bill to amend the state’s limited medical cannabis program to allow patients to obtain 4.5 grams of THC in a 90 day period.

The Mississippi House of Representatives put a medical cannabis initiative in serious jeopardy by voting to approve a more restrictive alternate question that would also appear on the November ballot next to the activist-drive one.

The Mississippi secretary of state has already certified a ballot measure to legalize medical marijuana. Pot prohibitionists in the state are pushing back, but public opinion polls show that their efforts to stymie legalization probably won’t succeed.

The Nevada Tax Commission voted to give its chairman the authority to negotiate settlements on behalf of state marijuana regulators.

Ohio’s attorney general rejected the summary language of a proposed marijuana legalization ballot initiative, but the campaign behind the measure took issue with the analysis.

Editor’s Note: Some cannabis stocks are stellar investments. Many others are not. You need to conduct due diligence. The good news is, we’ve done the homework for you.

My team has unearthed hidden gems in canna-business that most investors don’t even know about.

Looking to make money on marijuana legalization? For our latest research on the most profitable pot stocks, click here.