The Bull Is Dead…What Now?

“Nobody ever lives their life all the way up except bull-fighters,” Ernest Hemingway wrote in his 1926 classic novel The Sun Also Rises. Hemingway saw bull-fighting as the epitome of heroism.

There was nothing heroic about last week’s demise of the bull market. The mightiest stock market rally in history was killed by a tiny virus.

The bull is dead, but don’t panic. You can still make money in this market. Below, I’ll show you how. First, let’s review the recent carnage in the investment ring, which is bloodier than anything we’ve witnessed since 2008.

The Federal Reserve on Sunday implemented an emergency interest rate cut to zero, to stem a likely recession caused by the coronavirus. Investors weren’t reassured. Just the opposite.

China’s National Bureau of Statistics released grim data today. Retail sales in China plunged 20.5% in the January-to-February period from a year earlier, much worse than the consensus expectation of a 0.8% rise. Industrial output also fell 13.5% during the same period.

China has loosened lending rules. In Europe and Japan, interest rates are at negative levels. But cheaper credit won’t get virus-terrified consumers back into shopping malls or airplanes.

Interest rates can get pushed downward only so far. For central bankers around the world, the recession-fighting toolbox is nearly empty. By lowering interest rates last year when the U.S. economy was fairly strong, the Federal Reserve has painted itself into a corner.

The metric investors are more worried about isn’t interest rates; it’s the rate of coronavirus infections. Wall Street wants to see the number of cases go down. Cases have plateaued in China but they’re rising in the U.S and around the world.

President Trump delivered a televised address to the nation last Wednesday, announcing a travel ban on Europe. Travel industry stocks cratered the next day, contributing to a broader meltdown.

The Dow Jones Industrial Average shed more than 2,300 points last Thursday, in the largest single-day point drop in the Dow’s history. In terms of percentage losses for the Dow, it was the fourth largest in 120 years and the worst single-day loss since “Black Monday” in 1987.

Stocks entered a bear market last week, dropping about 20% from the high posted February 19 of this year and officially ending the 11-year-long bull market.

Circuit breakers at the New York Stock Exchange were tripped not once but twice last week, on Monday and Thursday, when the Dow fell by 7% both days. Bond yields fell to record lows.

The coronavirus pandemic has wiped out all gains from more than two and a half years for the Dow and the S&P 500 (see chart). 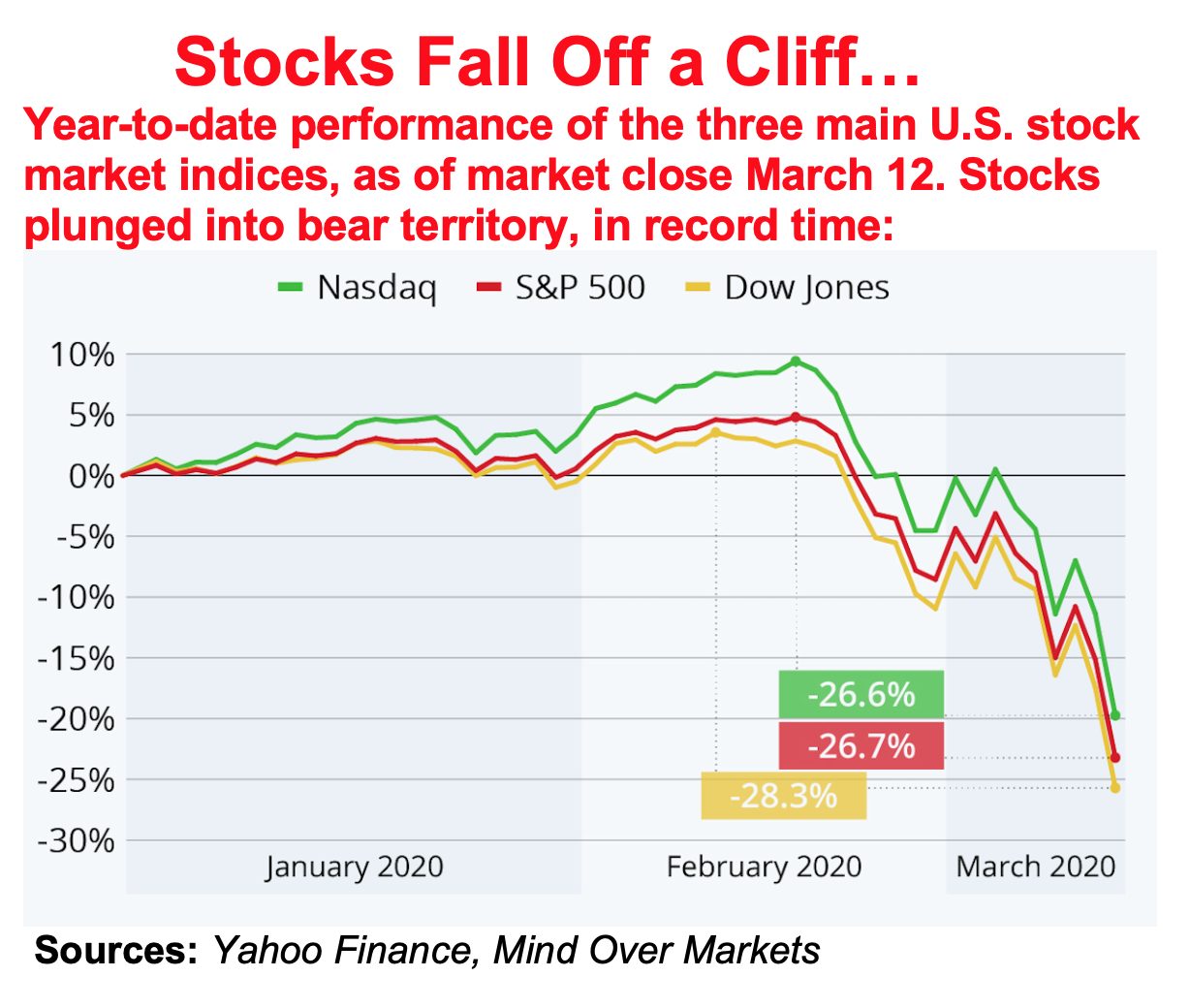 Last Friday, President Trump declared a national emergency, which frees up billions of dollars in assistance to states and localities. The president also promised that the federal government would expedite testing for Americans. 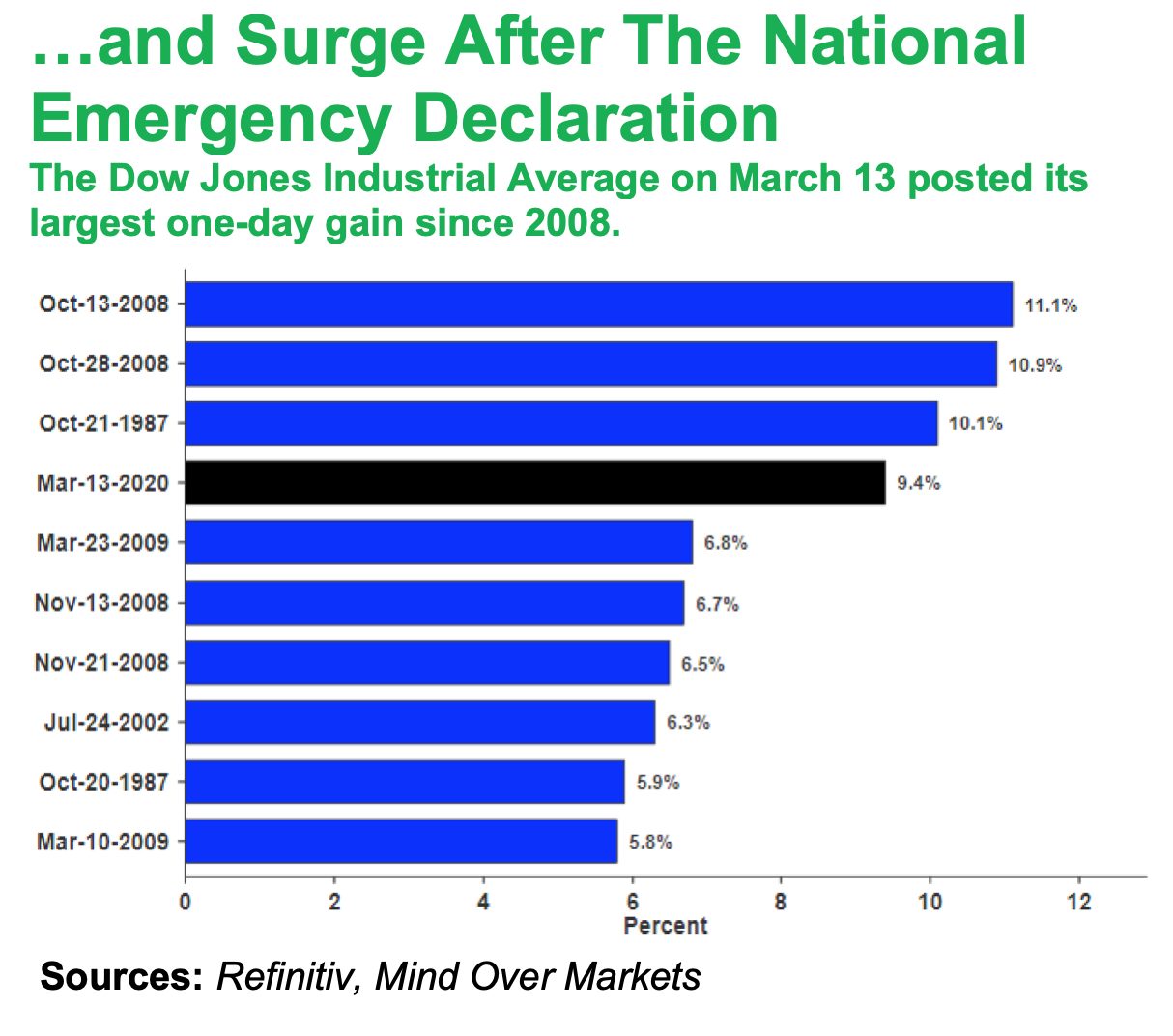 Also weighing on stocks and the economy is the collapse in oil prices, triggered by the oil price war between Saudi Arabia and Russia. The coronavirus undercuts oil demand and further dampens crude prices.

The U.S. Centers for Disease Control and Prevention (CDC) estimates that 2.4 million to 21 million people in the U.S. could require hospitalization because of the coronavirus, overwhelming the nation’s unprepared medical system. As many as 200,000 to 1.7 million people could die. Small wonder stocks have swooned (see chart). 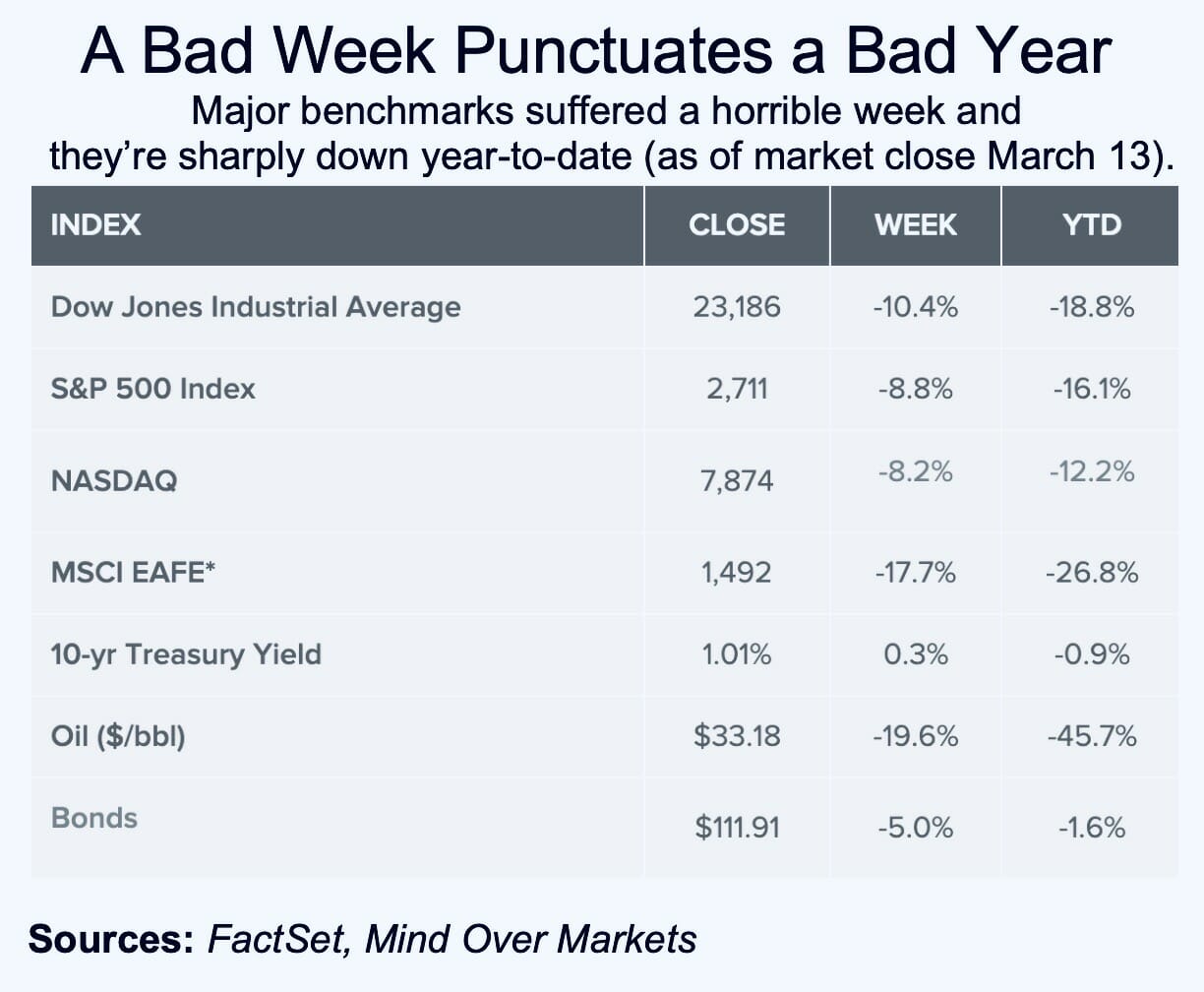 Economic damage is inevitable, as people practice “social distancing” to limit the spread of the virus. It’s a foregone conclusion that corporate quarterly operating results will take severe hits.

Investors were cheered Friday by the prospect of federal action, but as bad news about the coronavirus piled up over the weekend, the optimism has dissipated. The government moves slowly, whereas this virus moves quickly.

Also darkening the picture is the enormous amount of corporate and government debt around the world. The Organization for Economic Cooperation and Development estimates there’s $13.5 trillion in outstanding debt worldwide (among corporations other than financial institutions), much of it low-grade.

A deep economic downturn could trigger an avalanche of defaults. It’s already happening in the energy patch, as oil prices hover below $40 per barrel.

Toxic debt levels could be even worse than they appear. Leading up to the 2008 crisis, ratings agencies that were supposed to serve as watchdogs had been downplaying financial weaknesses. That’s because companies under review also happened to be paying clients. This conflict of interest still exists.

Steps you should take now…

Now that the bull has been slayed, what’s an investor to do?

Maintain a diversified portfolio. Rotate into stable companies that provide services that are consistently used regardless of market or economic conditions.

Consumer staples and utility stocks are prime examples of “essential services” investment plays. Use stop-losses for any additional stock purchases.

I also suggest that you turn to the advice of my colleague, Jim Fink.

Jim Fink is chief investment strategist of the premium trading service, Velocity Trader. Jim has devised a proprietary investing system that has delivered 20,747% in profits to Investing Daily readers in less than five years.

With Jim Fink’s trades, you don’t have to worry about headline risk. That’s because his trading methods consistently generate profits in bull or bear markets, regardless of pandemics or trade wars or recessions.

The techniques Jim uses for Velocity Trader can help you beat back the bear. Want to learn his investing secrets? Click here now.