How bad is the crisis in the U.S. oil shale industry? The state of Texas, which is governed by regulation-averse Republicans, is actually considering government-imposed production targets on drillers.

The Texas Railroad Commission recently proposed that the commission implement a mandatory 10% production cut on the state’s shale drillers, to reduce the glut of oil and shore up prices. Many shale producers are applauding the idea of state-rationed production.

Welcome to desperate times in the U.S. energy patch. Below, I’ll explore the depth of the crisis and why it matters for all investors.

Production curtailments would lift oil prices, but they also would make the shale industry unappealing for investors. Are we witnessing the demise of American shale? The Institute for Energy Economics and Financial Analysis (IEEFA) paints a grim picture, in a report released March 19.

A cross-section of 34 shale companies pinpointed by IEEFA reveals that they spent a combined $189 billion more than they earned over the past decade. That includes $2.1 billion in negative cash flow last year. In other words, the shale industry has racked up an unprofitable decade. “In financial terms, this production boom has been an unrelenting financial bust,” IEEFA analysts wrote.

Notably, the 34 companies included in the analysis posted negative cash flow in every single year over the past decade, IEEFA found.

It’s perhaps logical that drillers burned through cash during the 2014-2016 downturn, but only six of the 34 companies surveyed by IEEFA posted positive cumulative cash flow between 2017 and 2019.

The energy sector was “far and away the worst performer of the S&P 500 over the past decade,” IEEFA notes, “placing dead-last among all sectors for stock price returns in both 2018 and 2019.”

Here’s the kicker: all of these adverse trends occurred before these four events: the global coronavirus pandemic; the disintegration of OPEC+ production curbs; the Saudi-Russo oil price war; and the global economic downturn that’s inevitably heading toward recession.

Read This Story: The Saudi-Russo Standoff: What it Means for You

Now that oil prices hover in the mid-$20 per barrel range, the shale industry faces an existential crisis. Most shale oil wells drilled in the U.S. are unprofitable at current oil prices. Oil prices probably have lower to fall, as economic damage from the coronavirus takes an increasing toll. The following oil price chart shows the brutal extent of crude’s plunge: 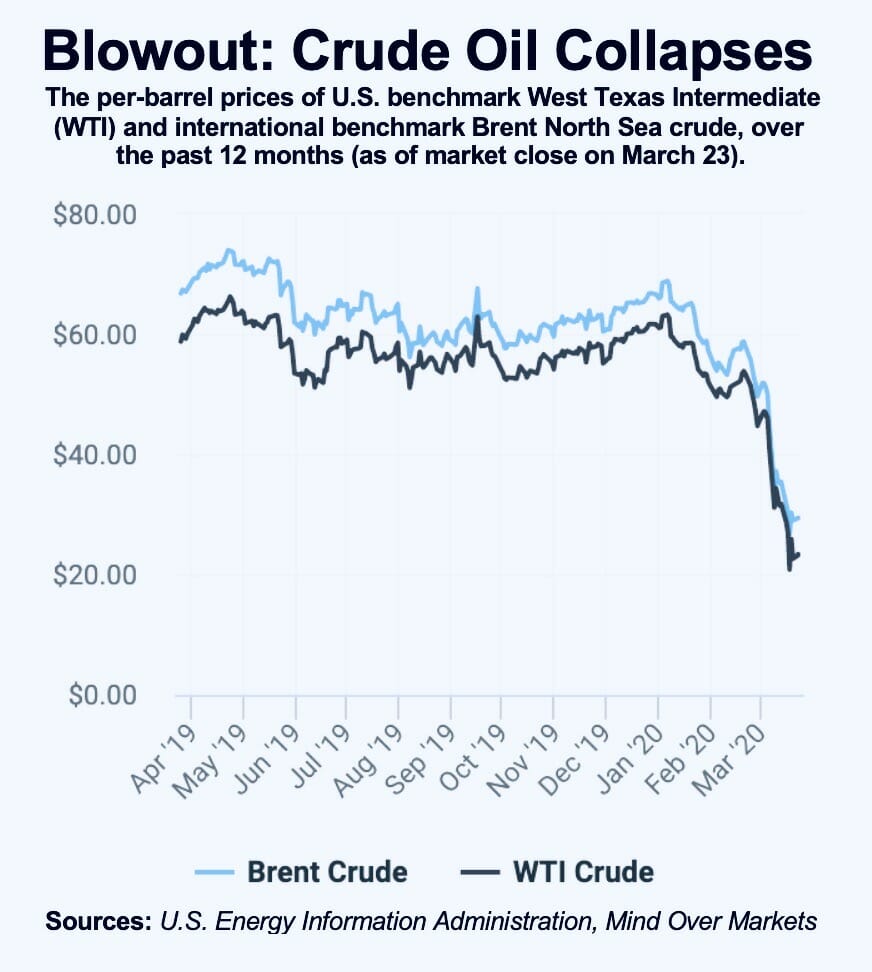 If you’re an investor without exposure to the energy sector, don’t think you’re immune to these dangers. The broader stock market and the energy sector are closely linked. In fact, for the last couple of years at least, the prices of equities and energy have moved roughly in tandem.

Scores of energy companies face bankruptcy, as revenue and earnings plummet because of the falling price of oil. The shuttering of businesses and grounding of airlines because of the coronavirus has clobbered energy demand, with no end in sight.

Energy producers are drastically curtailing capital spending, which in turn hurts the oilfield services industry. We’ll witness a tsunami of bankruptcies and layoffs throughout the energy sector, with negative implications for the financial markets and economy. Energy is viewed as a barometer of economic health and right now the sector is in terrible shape. Pink slips from laid off energy workers will start showing up in jobs data.

Energy will inevitably bounce back, but it may take many months. Energy companies with reasonable debt loads, efficient operations, low production costs, and prolific assets will come to the fore. The strongest energy companies will weather this storm and once again become winning investments. But first, the coronavirus pandemic must be contained and economic growth restored. When that happens is anyone’s guess.

Keeping the lights on…

However, there’s one asset class that doesn’t require guesswork: utilities stocks. We’re in a bear stock market, but you don’t have to sit on the bench. You can stay in the investment game, by investing in companies that provide “essential services.”

Whether we’re in an expansion or contraction, in a bull or bear market, people will always need certain necessities. An attractive essential services play right now is the utilities sector. In a recession or stock market crash, people will always find a way to pay the power bill.

Utilities confer growth, safety and income, in good times or bad. In these fraught market conditions, when the daily news sometimes seems like a nightmare, utilities are a sleep-well-at-night sector. For our list of the best utilities stocks, click here now.

John Persinos is the editorial director of Investing Daily. Questions about bear market investing? Drop him a line: mailbag@investingdaily.com.