The coronavirus pandemic isn’t a conventional headwind. It’s a natural disaster that has torn through the economy like a tornado in a trailer park.

The recent rebound in the stock market has been a welcome relief, but don’t abandon shelter. The storm isn’t over yet. Not by a long shot.

We could be witnessing a “bear market trap.” That’s an occurrence whereby stocks that have been sharply falling seem to be reversing their fall, but are only pausing before they resume heading south.

During his second inaugural address in 1937, President Franklin D. Roosevelt stated that more needed to be done to fight the Great Depression. He memorably said: “I see one-third of a nation ill-housed, ill-clad, ill-nourished.”

Analysts today aren’t suggesting that the U.S. stands on the cusp of another depression…not yet, anyway. But we’re already in a recession and the question is, will it be short and shallow or long and severe?

In an echo of FDR’s remarks 83 years ago, one-third of American households right now are suffering because of the coronavirus pandemic.

The U.S. unemployment data in recent days has been dismal and it’s likely to get even worse. But the headline data can understate the full extent of the pain and suffering to ordinary Americans. Through a multiplier effect, a single person’s layoff can hurt a family, household or community.

In a survey fielded March 10-16 and released on March 26, the Pew Research Center gauged the extent of the damage wreaked by the coronavirus on American communities. The chart tells the story: 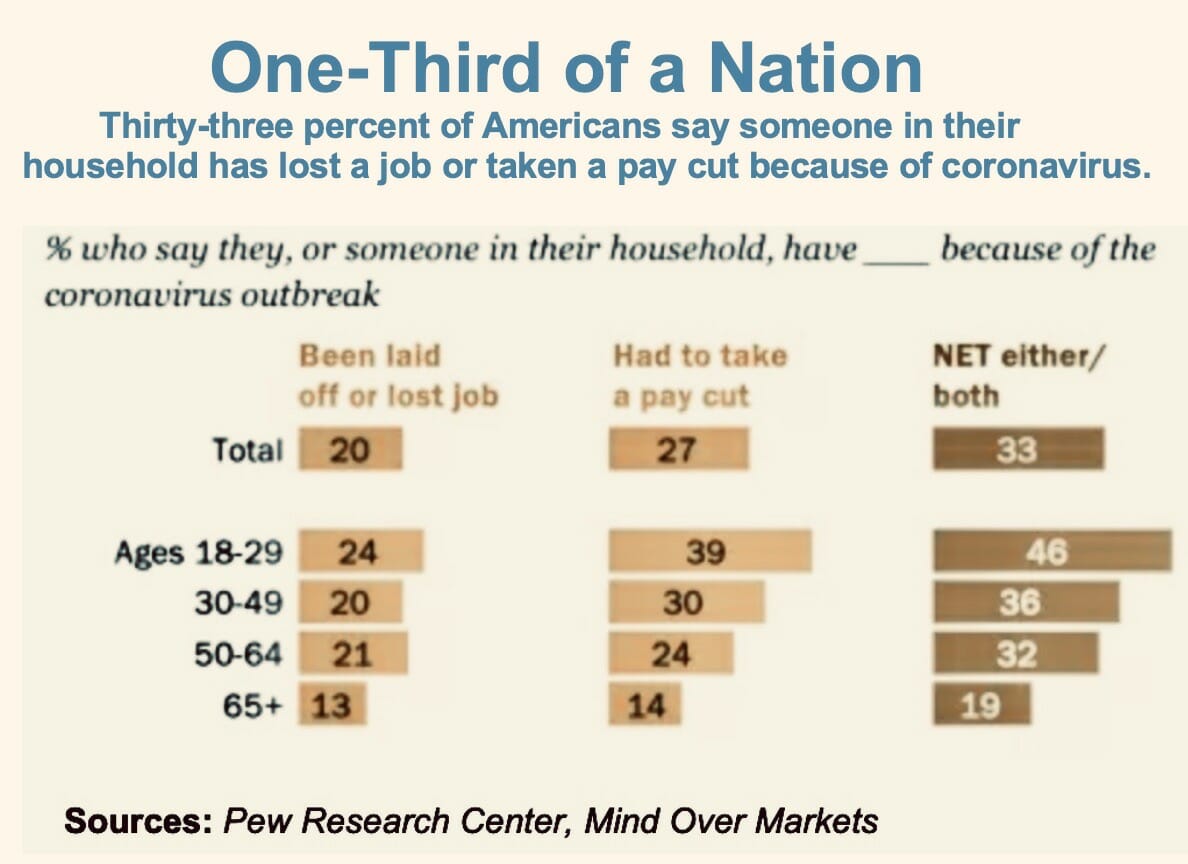 Read This Story: The Day The Jobs Boom Died

The overwhelming consensus is that we’re already in a recession. Let’s see what economists at four major investment banks are projecting:

Goldman Sachs (NYSE: GS): U.S. GDP in the second quarter will fall 24%, the worst quarterly drop in the country’s history. GDP will fall 6% in Q1.

The International Monetary Fund (IMF) warned last Friday that the coronavirus pandemic will trigger a global recession this year that could be worse than the one caused by the financial crisis of 2008-2009. The global economy already was slowing, due to factors such as the Sino-American trade war.

Hope is not a strategy…

On Monday the three main U.S. stock market indices closed sharply higher. On Tuesday morning, the three indices bounced between red and green in choppy trading, as the coronavirus death toll in the U.S. surpassed 3,000. With more than four times the population of the U.S., China’s death toll stands at about 3,300. The simple math tells us that America is in for a rough time.

Notwithstanding Tuesday’s volatility, stocks have modestly rebounded in recent days. However, this rise is indicative of an early bear market when investors still harbor unrealistic hopes and jump back into the market for no other reason than wishful thinking.

It’s also worrying that the recession could trigger a debt crisis. Low-grade corporate debt is a ticking time bomb, a huge risk that gets almost no coverage by the financial media. Television networks get better ratings from puff pieces about CEO celebrities. Discussing wonkish topics such as global debt is a ratings-killer, which is one reason why the debt problem isn’t on the radar screen of the average investor.

In today’s “post-truth” political environment, conventional rules and facts don’t seem to apply. But the spin doctors and misinformation gurus can’t repeal the laws of finance. And these immutable laws are pointing to trouble ahead. How should you trade?

First of all, the worst move would be to panic and dump inherently sound equities. If you’re holding good stocks but they’ve taken a beating, a wise course of action is to do nothing with them. Also make sure you have exposure to safe haven assets, many of which are back on the bargain shelf. Dividend-paying stocks of essential services companies are good bets.

Hope is not a strategy. A recession and concurrent decline in corporate earnings are “baked in the cake.” That spells further declines for the stock market.

Call it a bear trap, a sucker’s rally, a dead cat bounce…whatever you like. The fact is, the recent recovery in stocks could be the prelude to another crash.

There’s still money to be made in this market and the team at Investing Daily will show you how. Stay in the game! But above all, stay rational.