Will “Ganja-Preneurs” Save the Day?

In a world abounding with investment peril, the American entrepreneur just might save the day. Small companies in the U.S. are positioned to outperform their larger brethren and provide much-needed adrenaline to a coronavirus-battered economy.

The marijuana sector is getting ready to lead the way. Cannabis companies are mostly small-cap growth enterprises and hence their appeal as investments.

Small caps are generally defined as having market valuations of between $300 million and $2 billion. Small-cap cannabis firms can help shore up the overall economy, a fact that’s not lost on policymakers and interest groups.

Democrats in the U.S. House of Representatives last week introduced a measure to include cannabis businesses in future congressional coronavirus stimulus packages.

On Monday, a coalition of groups including the American Civil Liberties Union, Human Rights Watch, Lawyers’ Committee for Civil Rights Under Law, Leadership Conference on Civil & Human Rights, Center for American Progress, United Food and Commercial Workers International Union, and the National Organization for the Reform of Marijuana Laws sent a letter urging congressional leaders to include cannabis companies in forthcoming COVID-19 relief legislation as a matter of helping entrepreneurs, especially companies run by minorities.

The letter stated in part:

“Workers in the state-legal marijuana industry are no different than other sectors of the economy who show up to work every day to provide for their families. If marijuana businesses are unable to survive, the lives of millions of patients registered in state medical marijuana programs and the livelihoods of hundreds of thousands of marijuana workers will be under threat.”

U.S. Sen. Kamala Harris (D-CA), who is being discussed as a potential running mate for Democratic presidential candidate Joe Biden, posted this tweet on the topic: 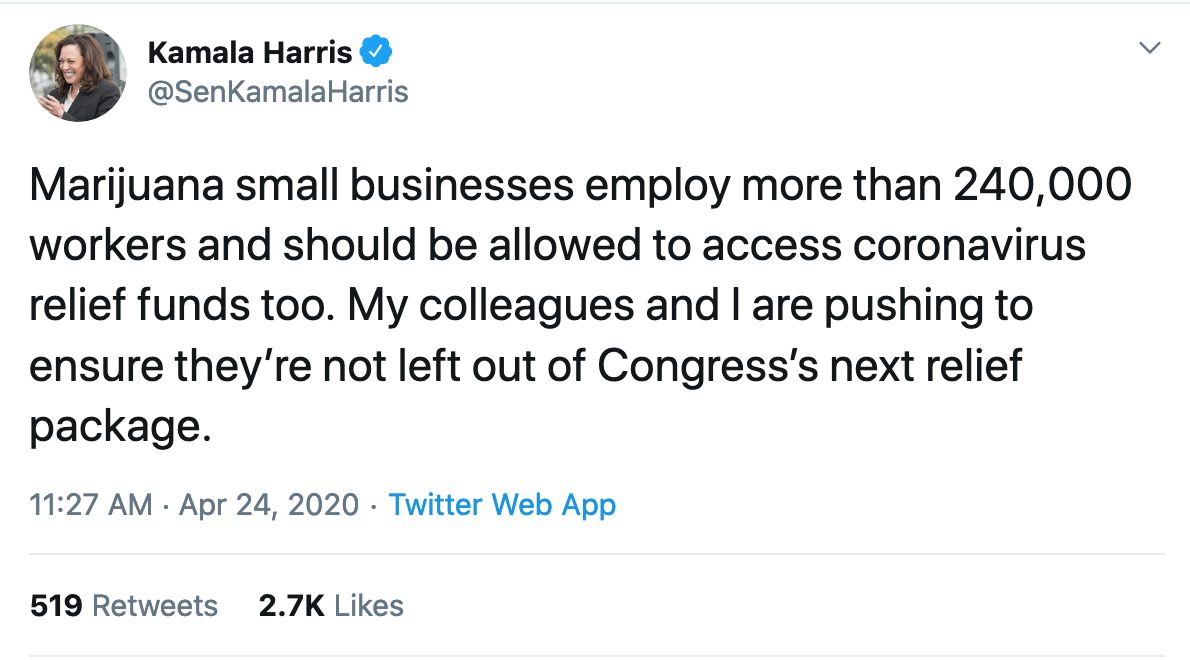 Earlier this month, a coalition of marijuana industry associations sent a letter to U.S. governors and state treasurers, requesting their assistance in obtaining financial relief that marijuana businesses are being denied by the federal government amid the coronavirus pandemic.

News reports Tuesday revealed significant delays and inefficiencies at the SBA in getting COVID-19 loans to small businesses.

Read This Story: At the Corner of Main Street and High

U.S. Rep. Diana DeGette (D-CO) tweeted on Monday about the marijuana industry: “No small business should be left behind. This legal and profitable CO industry should be treated equally, including access to the emergency relief funds they need right now.”

Legal marijuana is a jobs-generating juggernaut in both the recreational and medical sectors, underscoring the staying power of publicly traded companies in the cannabis sector.

According to a “2020 Jobs Report” recently released by the web site Leafly, the legal cannabis industry in the U.S. experienced 15% growth in 2019, adding 33,700 jobs. That was the fastest rate of jobs growth for any industry last year in the United States.

The vast majority of those jobs were generated by small-cap marijuana companies, in the areas of agriculture, dispensaries, equipment, biotechnology, branded loose-leaf products and edibles, etc. This dynamic mirrors the broader economy.

Small businesses represent more than 99.7% of all U.S. employers. They employ half of all private sector workers. They account for up to 80% of the new jobs created annually in the country. Every portfolio should have exposure to small caps and the marijuana sector is a good place to start.

Small-cap stocks on average have dramatically outperformed all other types of stocks over the long-term. Many small-cap stocks are under-followed and ignored by Wall Street, which leads to investor neglect and undervaluation. In today’s dicey investing environment, the virtues of “value” have come to the fore.

Many intrinsically sound small-cap stocks have gotten beaten down with the rest of the broader market, due to the coronavirus pandemic. However, as U.S. states begin to tentatively reopen their economies, these undervalued small fry are poised to outperform the market because economic growth is manna for them.

Among the hundreds of marijuana stocks available, only eight boast market capitalizations of $1 billion or above. In addition to solid small-caps, the cannabis industry also is rife with overly risky penny stocks. Many penny pot stocks went belly up late last year, during the marijuana stock swoon.

But corrections are healthy. They winnow out the weak players to allow the survival of the fittest. The coronavirus pandemic has actually helped canna-businesses, because several states and localities have designated them as “essential services.” Buyers have flocked to buy marijuana, fearing shortages.

Read This Story: Pot Investors: This “Black Swan” Is Your Friend

The pandemic-fueled rebound in marijuana sales and profits is providing a tailwind for the share prices of cannabis firms. This momentum is likely to last, even as the broader market struggles with COVID-19 shutdowns.

Small-cap stocks are riskier but in return they confer a greater chance for market-beating growth than bigger companies. Many small marijuana stocks with massive potential are now on the bargain shelf.

If you choose wisely, you could own the next Microsoft of marijuana. The trick is knowing where to look. For the best pot plays now, click here for our report.