After peaking in February and then bottoming out in March, the stock market has staged a remarkable recovery. Over that span, an intriguing pattern in its behavior has emerged. That presents a profit opportunity for options traders this week. More on that in a moment.

But first, let’s take a look at a chart for the SPDR S&P 500 ETF Trust (SPY) since the start of the year. The V-shaped recovery over the past 10 weeks is easy to see. But look closer and you will notice several smaller v-shaped movements within the larger trend (circled). 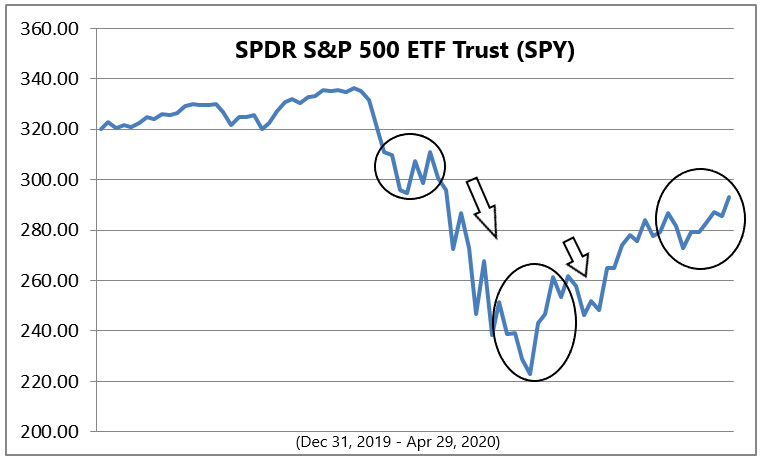 All three of those smaller reversals occurred during the first and last weeks of February, March, and April. That’s when most index funds rebalance their portfolios. They do that to duplicate the composition of the index, which is cap-weighted.

True to form, the last week of April was also quite strong. In fact, the last five trading days of April accounted for roughly a third of the monthly net gain. If that trend continues into May, we should see another dip in stock prices this week.

Also read: COVID-19 Investing: How to Beat the Herd

These smaller v-shaped movements are short in length, both in terms of amplitude and time. Profiting from them requires decisive action. Think about it too long and the opportunity for gain may vanish.

The simplest way to participate in these mini-reversals is to trade options on the SPY. Let’s say you believe the index will fall during the first week of May. In that case, buying a put option on the SPY that expires on May 8 may be the way to go (a put option increases in value when the price of the underlying security decreases).

Here is how the math works. On April 29, a put option on the SPY with a strike price of $290 that expires on May 8 could be bought for $3. At that time, the SPY was trading a little above that price.

For this trade to become profitable, the SPY would have to drop below $287 by May 8. That is roughly a 1% price movement, which in this market is a daily occurrence. But since the past week was so profitable, the premium for buying put options has diminished.

Conversely, the premium for buying call options has expanded (call options increase in value when the price of the underlying security increases). That same day, a call option on the SPY with the exact same strike price and expiration date was selling for more than $7.

In other words, the “implied volatility” of a call option is twice as much as a put option. That means a lot more investors are betting on the market to go up than down by the end of this week.

Apparently, that confidence is short-lived. The same put option expiring one week later (on May 15) costs twice as much as the one expiring on May 8. The stock market could suddenly reverse direction. All it would take is an unexpected spike in coronavirus cases or a couple of bad quarterly earnings reports from a few big companies.

What I would not bet on is the stock market continuing its recent surge. With the exception of a handful of large tech stocks, most companies’ results have come up short of already reduced expectations. New unemployment claims have hit an all-time high while the economy is contracting at a record pace.

It is sometimes said that the stock market climbs a wall of worry. However, this wall may turn out to be more of a blockade. If so, the month of May could be a moment of truth for the financial markets.

To be clear, I do not expect the stock market to collapse. If we get the W-shaped recovery I am anticipating, the next leg down should not break through its previous low from March 23.

For that reason, passive investment strategies such as index investing won’t do you much good until we get past the bottom of the next leg down. Until then, active trading strategies may be one of the few ways to profit from this extreme volatility.

Another way to profit is to identify companies that may be acquired later this year. That’s not my area of expertise, but it is for my colleague Nathan Slaughter.

Nathan has developed a proprietary screen that uncovers how Wall Street rigs certain stocks that are involved in mergers and acquisitions…so you can jump in before these stocks soar in price. In fact, Nathan is ready to reveal his latest winning stock trade. Click here now for details.