Economy Down, Stocks Up: Why The Disconnect?

We’ve seen the worst economic and employment numbers since the Great Depression. And yet, stocks soared in April, to post their best month in about 30 years. What explains the contradiction?

Many readers have asked me to explain the paradox of a rising stock market amid a crashing economy. To paraphrase a common question: “With all the bad economic news because of the coronavirus pandemic, the stock market is bound to collapse. I should be dumping stocks, right?”

In a word…no! Never sell inherently sound stocks in a panic. Always remember this truism: the stock market is not the economy. I’ll get to that in a minute. First, let’s review recent stock market gains.

Investors just enjoyed the best month for stocks in three decades. The S&P 500 ended the month of April with the highest gains since 1987, up 12.9% for the month. There’s precedent for last month’s surge. Over the past 20 years, April has been up 80% of the time.

Stocks ended last week in the red but they’re way off their March lows (see table). 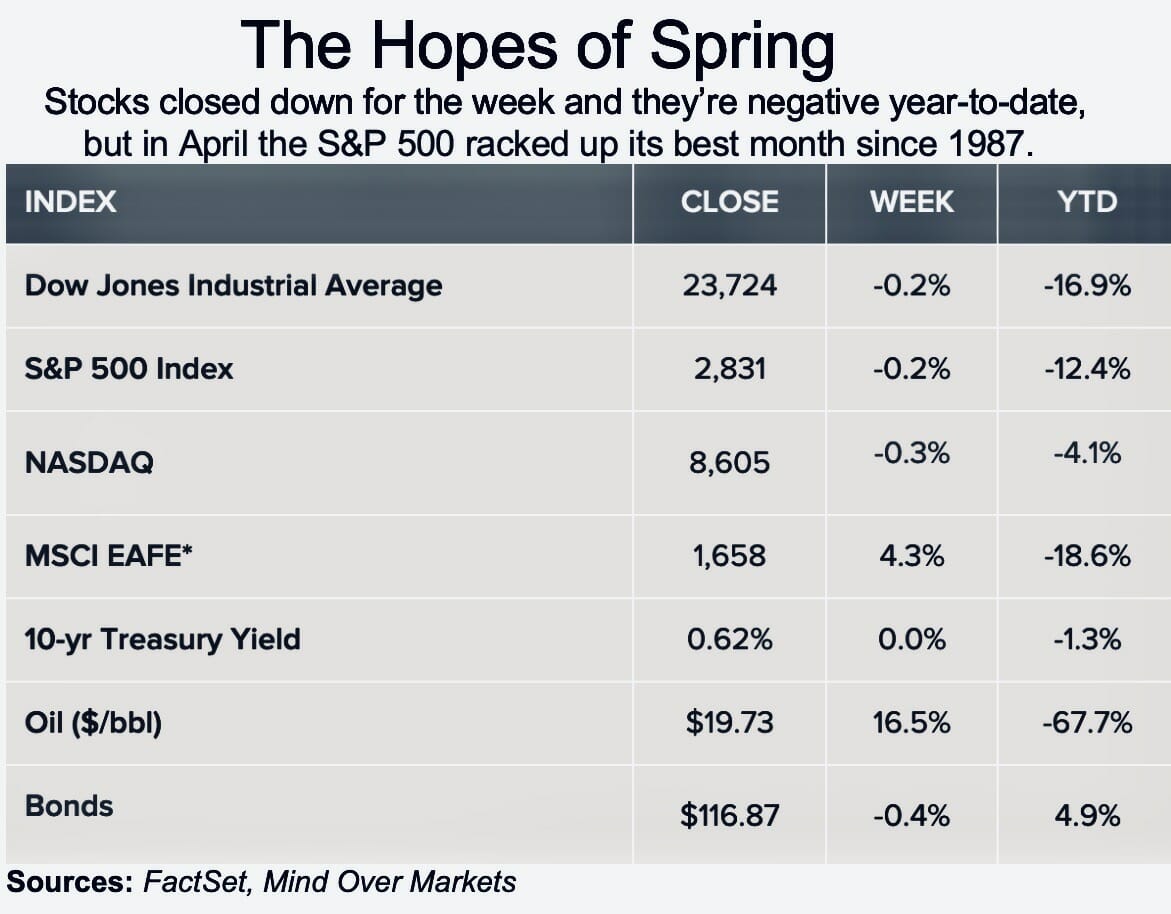 April was a quick reversal of the fastest bear-market decline in 90 years. Through February and March, the major stock averages plunged about 40% in only 28 trading sessions. From February 24-28, stock markets worldwide posted their largest one-week declines since the financial crisis in 2008.

And yet, the month of April featured a worldwide shutdown of business, economic and social activity. Economic and earnings data have been grim, with 30.3 million Americans thrown out of work (and that’s probably an undercount).

Which brings me back to our puzzling dynamic. Why do stocks rise even when there’s economic carnage? To be sure, the beginning of May has brought downward momentum for stocks, but their recent recovery from the nadir of March is nonetheless remarkable.

Just keep in mind, the stock market and the economy don’t move in lockstep. Yes, they influence each other, but the markets are forward looking and they’re driven by emotions that are often irrational. As Albert Einstein said: “There are three great forces in the world: stupidity, fear and greed.”

Notably, during the Roaring Twenties, most investors ignored the fact that a recession had started in August 1929. Wall Street’s unbridled greed continued to push stocks higher, until the house of cards came tumbling down in October 1929.

Stock prices are bets on future corporate profits. In turn, the rise and fall of those profits aren’t directly correlated with average worker wages. For example, the 2017 tax cut boosted corporate earnings, but the windfall largely went to stock buybacks and dividends, not to worker salaries or investments in organic growth.

The stock market is disproportionately influenced by a small subset of the population. The wealthiest 10% of American households own 84% of all stocks. Large institutional investors that dominate trading and consequently set prices are aware of economic data. That means the negative facts we’re currently seeing about the economy and earnings are already baked into stock prices.

Read This Story: Q&A: Can You Trust The Stock Market Rally?

It’s unexpected news that drives future stock prices. Regardless of whether the future news is good or bad, what matters is whether the news is better or worse than already anticipated. Accordingly, with all of the terrible news wrought by the COVID-19 pandemic, unless the situation unfolds in ways that are worse than expected, stocks will continue to offer attractive profit potential.

When stocks march higher in the face of geopolitical and economic dangers, they’re proving an old Wall Street adage: stocks climb walls of worry. This expression refers to the stock market’s tendency to climb when investor fears don’t materialize.

Economic reports are likely to worsen in coming weeks, due to the expansion of containment precautions earlier in the year. But the market has been putting all that aside to focus on the forthcoming reopening of the economy. The future beneficial effects of stimulus also have buoyed bullish sentiment.

The Federal Reserve last week held its benchmark rate at 0.0%-0.25% and Fed Chair Jerome Powell has promised to keep rates near zero until the jobs market recovers. The federal government also has stepped up to the plate with massive fiscal stimulus and it’s currently working to provide more.

Rest assured, it’s inevitable that the virus will be contained and the economy will recover. It’s impossible to say exactly when conditions will improve, but the ground has been fertilized for future growth. The green shoots of this growth are likely to emerge in the second half of the year.

But over the short term, brace yourself for unpleasant data. First quarter earnings season continues this week, with roughly one-third of the companies in the S&P 500 posting operating results. Key economic reports to watch this week include factory orders (Monday), the non-manufacturing Purchasing Managers’ Index (Tuesday), and April’s jobs report (Friday).

April’s resurgence in stocks wasn’t based on current macro-fundamentals, which are dismal. Instead, last month’s gains were spawned by investor optimism that the economy will survive this pandemic-induced rough patch and soar to greater heights.

The market rebound in April underscores the wisdom of staying invested even when the economy seems grim. We’ll probably experience brief sell-offs in coming weeks, as unexpected virus-related headlines rattle investors. But through it all, maintain discipline and stick to your long-term goals.

Editor’s Note: I remain hopeful that the seeds of future growth have been planted by fiscal and monetary stimulus. But whichever way the broader stock market moves, my colleague Nathan Slaughter has devised a way to consistently reap stock profits.

Nathan is an expert at pinpointing investment opportunities in corporate takeovers. He has developed a proprietary screen that uncovers how Wall Street rigs certain stocks that are involved in takeover activity…so you can jump in before these stocks shoot up in price.

Nathan is about to execute his next winning trade. There’s still time to get on board, but you need to act now. Click here to learn more.