Medical Marijuana Gets Its Mojo Back

“Legalize It” (1976), a popular song by Jamaican reggae musician Peter Tosh, touted the medicinal virtues of marijuana and argued for the legalization of weed, at a time when such songs were considered subversive and pot was banned nearly everywhere:

So you’ve got to legalize it
And don’t criticize it
Legalize it, yeah yeah
And I will advertise it

It’s good for the flu
Good for asthma…

Marijuana equities sold off in late 2019, due to overvaluation and unfulfilled promises. But pot stocks are making a comeback, especially as states and localities deem marijuana an “essential service” during the COVID-19 pandemic.

The excitement over medical marijuana is picking up steam again, as the spate of recent research shows. The lucrative “green rush” isn’t over. Not by a long shot.

Medical experts noted in April that cannabinoids (CBDs) have been shown to confer pain-relieving, sleep-inducing, and anti-inflammatory properties for people stricken with influenza. Several other recent studies into the general effect of cannabis on asthma have noted improvements in pain.

The Centers for Disease Control and Prevention is currently seeking public input on “experiences with pain and pain management” including “topics focused on using or prescribing opioid pain medications, non-opioid medications, or non-pharmacological treatments.” At the same time. the Department of Health and Human Services is funding research into whether marijuana is an effective opioid alternative.

In a recently published report, a team of graduate students at the University of Arizona’s College of Public Health found that patients reported a 64%-75% reduction in opioid dosage when used in combination with medical cannabis.

“This review found a much higher reduction in opioid dosage, reduced emergency room visits, and hospital admissions for chronic non-cancer pain by [medical cannabis] users, compared to people with no additional use of [medical cannabis],” the study states.

In addition to the large reduction in opioid dosage when combined with medical cannabis, the review found that 32%-59% of patients with non-cancer chronic pain reported marijuana as a substitute for opioids.

“One study reported a slight decrease in mean hospital admissions in the past calendar year and decreased mean emergency department visits in the past calendar year for patients who received [medical cannabis] as an adjunct to opioids in the treatment of non-cancer chronic pain compared to those who did not receive [medical cannabis],” the authors wrote.

A separate study recently released by Johns Hopkins University found that “cannabis may improve opioid withdrawal symptoms and that the size of the effect is clinically meaningful.”

Johns Hopkins surveyed 200 people who said they ingested both marijuana and opioid painkillers. The survey sought to find whether these respondents believed that cannabis helped or worsened their struggle with opioid addiction.

Among the 200 total respondents, 125 said they used cannabis to cope with painful withdrawal symptoms linked to heavy opioid use. Nearly three out of four respondents, or 72%, said cannabis helped them get through the excruciating withdrawal period, which can last for weeks.

As marijuana becomes increasingly legal, the recreational and medical uses of this apparent wonder herb represent a huge investment opportunity.

The legalization and subsequent commercialization of marijuana is an unstoppable trend and a once-in-a-generation chance to get onto the ground floor of an industry that’s becoming a juggernaut. If you’re selective and conduct due diligence, the right pot stock could turbocharge your portfolio.

The clear medical benefits of marijuana have gone a long way toward burnishing pot’s public image, providing a tailwind for legalization (see chart). 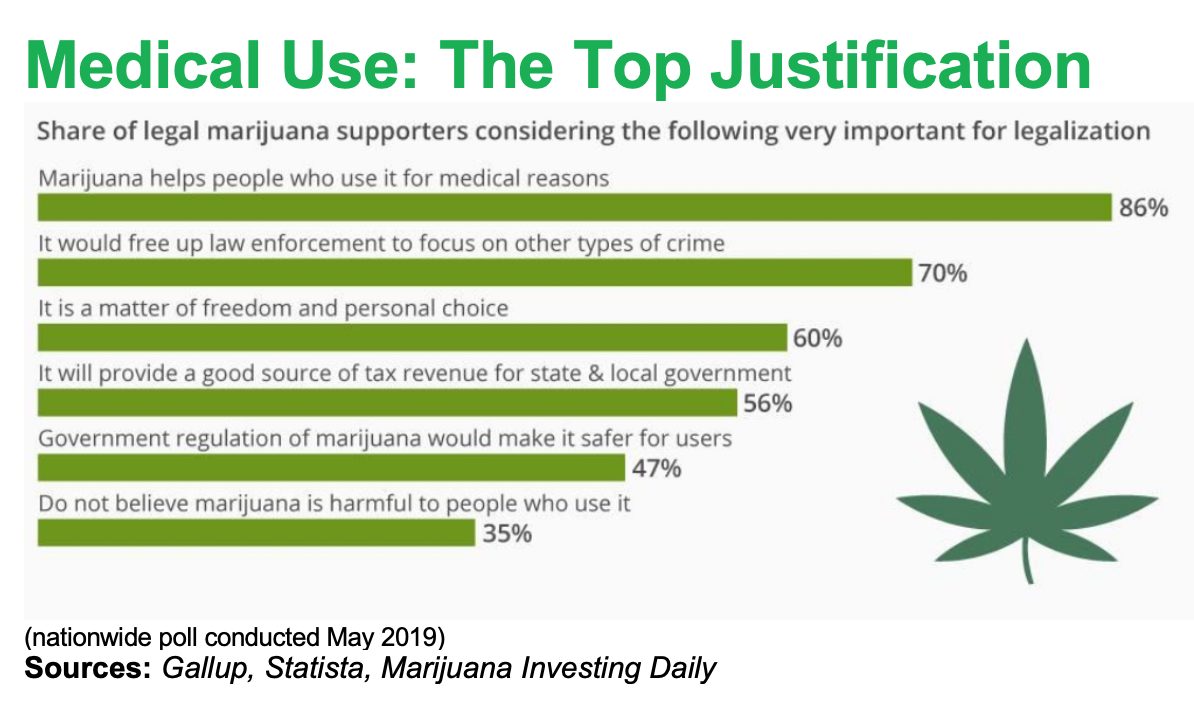 Cannabis-based medicines present some of the most intriguing plays in the entire biotechnology sector. For conditions ranging from epilepsy to multiple sclerosis, to glaucoma, to even cancer, compounds derived from the plant are achieving remarkable results when conventional therapies can’t.

The marijuana industry has a few well-capitalized stocks traded on major exchanges, but many pot companies are penny stocks traded Over the Counter. If you want to invest in a marijuana biotech, you need to be selective. The companies worthy of investment are those with solid balance sheets, proven products, and partnerships with giant drug firms.

Many of the biotechs working in the marijuana realm use synthetic CBDs to skirt around the legalities of grown marijuana. Creating CBDs in the lab, versus growing plants, also makes it easier and cheaper to increase the scale of manufacturing capacity. Companies that use lab-created CBDs aren’t subject to the vagaries of growing seasons or the risk of losing crops.

The use of synthetic CBDs is paying off big time for marijuana biotechs. Indeed, the most profitable companies in the marijuana industry will be those that develop a proprietary technology that they can patent. Those are the future winners in medical marijuana.

As scientific research continues into the efficacy of medical marijuana, investors are receiving empirical proof that weed’s momentum will last.