Just Another Brick in the Wall (of Worry)

I enjoy rock climbing, especially in the rugged mountain beauty of my native New England. It’s nerve-wracking, but that’s the point. It’s all about the adrenaline.

I’ve thought of those experiences lately, while observing the stock market’s rally in April and early May. As stocks continue to march higher despite the coronavirus-induced economic crash, they’re proving an old Wall Street adage: stock markets climb a wall of worry.

Markets are forward looking, so they tend to rise when investor fears about the future don’t come true. But will the coronavirus “wall” eventually prove insurmountable?

Investors are cheered that governments around the world are relaxing social distancing restrictions and incrementally opening economies.

The three main U.S. stock indices closed higher Tuesday for the second straight session. The Dow Jones Industrial Average rose 0.56%, the S&P 500 gained 0.90%, and the tech-heavy NASDAQ composite jumped 1.13%. As of this writing Wednesday morning, all three indices were trading in positive territory.

April was the best month for stocks since 1987. But Wall Street’s optimism might be premature. Medical experts warn that the world could face a second wave of infections and deaths. Evidence also suggests that the U.S. death toll is being under-reported, especially in rural communities.

The most effective solution for our predicament isn’t fiscal or monetary…it’s medical. However, despite some wishful thinking now and again in the media, there’s no vaccine on the immediate horizon. Unless you count quack remedies.

The federal government is continually upping its estimates for COVID-19 fatalities. Cities such as New York are experiencing a drop in cases, but new hot spots are emerging in parts of the country where social distancing came late.

Unemployment levels have reached astronomical proportions not seen since the breadlines of the 1930s. Scores of struggling businesses are likely to go bankrupt.

Corporate earnings for the first quarter are sharply negative and a wave of companies have slashed their dividends.

The following chart breaks down first-quarter earnings performance so far, by sector: 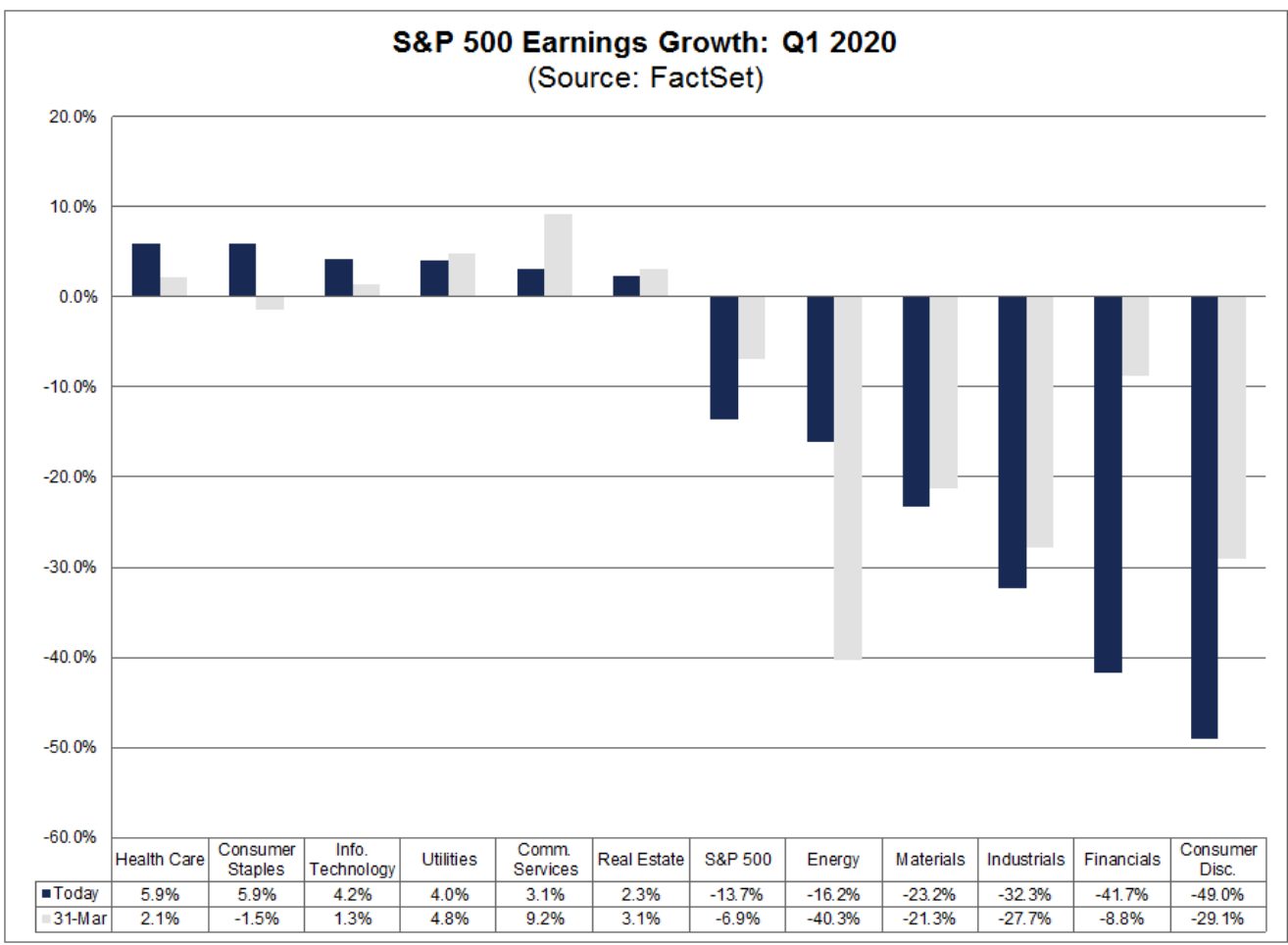 The bulls are betting on a “V”-shaped economic recovery, but to me that seems delusional. Economic growth has fallen so precipitously around the world, it would take an enormous (and highly unlikely) surge of growth to get us back to square one.

Instead of a stock market rally with long-term staying power, we’re probably witnessing a bear market trap, whereby momentum eventually fizzles and another decline ensues. These brief rallies are driven by investors so eager to scoop up bargains, they ignore or misinterpret reality.

The fact that Warren Buffett is hoarding a record amount of cash is instructive. Buffett raised much of that cash by liquidating his holdings in the four major airlines in March and April, as social distancing devastated the travel industry. The last time Buffett sharply elevated cash levels was in 2000, shortly before the dot.com bubble burst.

It pays to heed Buffett’s strategic moves. In October 2008, when stock markets were crashing, Buffett wrote: “Those investors who cling now to cash are betting they can efficiently time their move away from it later.” As the Oracle of Omaha teaches us, temperament is more important than intelligence.

The Federal Reserve has gone so far as to include corporate bonds in its asset purchase scheme for the first time, even bonds that are rated junk. The central bank is now shoring up dubious companies that it had previously warned banks to avoid. What happens if the economy doesn’t sharply bounce back? We’ll probably see a deluge of downgrades and defaults.

It’s my contention that another selloff awaits in the near future. The last thing you want to do is bail out of a falling market, thereby locking in your losses. Now’s a good time to capitalize on the recent rally by raising some cash, for future opportunities.

Here’s a prudent portfolio allocation now: 60% stocks, 15% hedges, 15% cash, and 10% bonds. About 5%-10% of your hedges portion should be in precious metals such as gold and silver. For details about our favorite gold play, click here.

Read This Story: Best-Performing Asset of the Last 20 Years

Some investors are tempted to go bargain-hunting in the beaten-down energy sector, but the current chaos in the oil and gas industry makes such forays unwise for now. The above earnings chart helps explain why.

The severe economic downturn is making it difficult for companies in a variety of sectors to pay their bills. The corporate debt bubble is poised to explode, with collateral damage afflicting the global financial system. It’s more important than ever to shun heavily indebted companies.

When considering a company’s stock, look for a solid balance sheet, seasoned management, substantial free cash flow, and a competitive moat. These are the intrinsically sound qualities that Warren Buffett prizes. You should, too. Stay invested but, like any good rock climber, don’t lose your grip and fall.