Today is a special day for devotees of psychedelic drugs. I’ll explain why investors, even those with zero interest in getting high, should sit up and pay careful attention.

One year ago today, Denver, Colorado became the first jurisdiction in the United States to decriminalize psilocybin fungi, aka “magic mushrooms.” The historic legal change enacted on May 7, 2019 triggered a seismic shift from cost-to-coast and gave birth to an exciting investment theme.

We’ve come a long way from the “Human Be-In” at Golden Gate Park in San Francisco in January 1967, organized in opposition to the prohibition of LSD, magic mushrooms and other psychedelics.

The Be-In was spearheaded by a group of lawbreaking drug enthusiasts known as “The Brotherhood of Eternal Love.” About 30,000 people attended the event, which introduced the concept of psychedelics to suburbia.

Speaking at the Be-In, counter-culture guru and psychedelics advocate Dr. Timothy Leary coined the now-famous phrase: “Turn on, tune in, drop out.”

And today, about a half century later, Denver’s pro-psychedelics contingent is celebrating a city ordinance that seemed inconceivable to those hippies back in ’67.

As momentum builds to lift restrictions from psychedelics such as psilocybin fungi, it’s opening a range of opportunities for established companies that have already launched profitable cannabis products.

The operable phrase now should be: Turn on, tune in…make money. It won’t be long before publicly traded marijuana companies start adding branded products predicated on magic mushrooms, for recreational as well as medicinal purposes.

Before I go on, let’s quickly get our definitions straight. “Psychedelic” is any psychoactive substance, such as LSD or psilocybin, which causes perceptual changes, visual hallucination, and altered awareness of the body and mind. “Hallucinogen” is any substance tending to induce hallucination. For our purposes here, the words can be considered synonyms.

Another quick aside: This publication is not taking a stance in favor of legalizing or taking drugs, such as marijuana or psilocybin. My job isn’t advocacy; it’s helping you find new sources of investment profits. I would be remiss if I didn’t point out the money-making potential of the emerging trend by which psychedelics are entering the mainstream.

The next big thing…

Aggressive efforts are underway throughout the country to legalize magic mushrooms and other psychedelics, which makes these substances the next big investment theme.

Several mushroom species naturally contain the compound psilocybin, which has hallucinogenic properties. Magic mushrooms are a colorful part of cultural lore, but to this day they’re still illegal on the federal level and throughout most states and localities.

The U.S. Department of Justice lists psilocybin as a Schedule I controlled substance. “Scheduling” is a system by which the U.S. Drug Enforcement Agency decides which substances are dangerous and which substances are medically useful. The Controlled Substances Act, the legislation surrounding the scheduling system, was created in 1970 by the Nixon administration.

Back in 2019, the Decriminalize Denver campaign defied the status quo and the odds. Psilocybin was starting to receive acceptance in the medical community for its efficacy in reducing physical pain and psychic anxiety, but there were no well-funded pharmaceutical lobbyists pushing for the ballot initiative. Just grassroots activists with passion.

Since that historic vote in Denver, a nationwide movement has arisen. States and localities are rushing to follow the Mile High City’s lead. Campaigns to decriminalize magic mushrooms resemble early initiatives to normalize marijuana. The time to get aboard an investment trend is early, before the rest of the herd catches on.

The Denver ordinance prohibits the city from spending resources to impose criminal penalties on those who have magic mushrooms. Small businesses are sprouting up like mushrooms (pun intended) in Denver, to meet growing demand for the mind-altering fungi.

Activists in more than 100 cities across the U.S. are now mobilizing to reform their own policies on psychedelics. California, as it usually does in such matters, is leading the way.

Oakland and Santa Cruz this year went even further than Denver and decriminalized a wide range of entheogenic substances such as ayahuasca and ibogaine. An entheogen is a psychoactive substance that induces alterations in perception, mood, cognition, or behavior for the purposes of fostering higher spiritual consciousness in sacred contexts.

Recent medical research has found that psilocybin and ibogaine are effective at helping individuals overcome addiction. Psilocybin has been shown to alleviate post-traumatic stress disorder and depression.

Oregon advocates are close to qualifying a statewide ballot initiative to legalize psilocybin for therapeutic use, for consideration by the voters this November.

On Wednesday, activists in Washington D.C. were approved by the DC Board of Elections to circulate a petition to decriminalize various psychedelics in the nation’s capital. The following May 6 tweet shows how the groundwork is getting done: 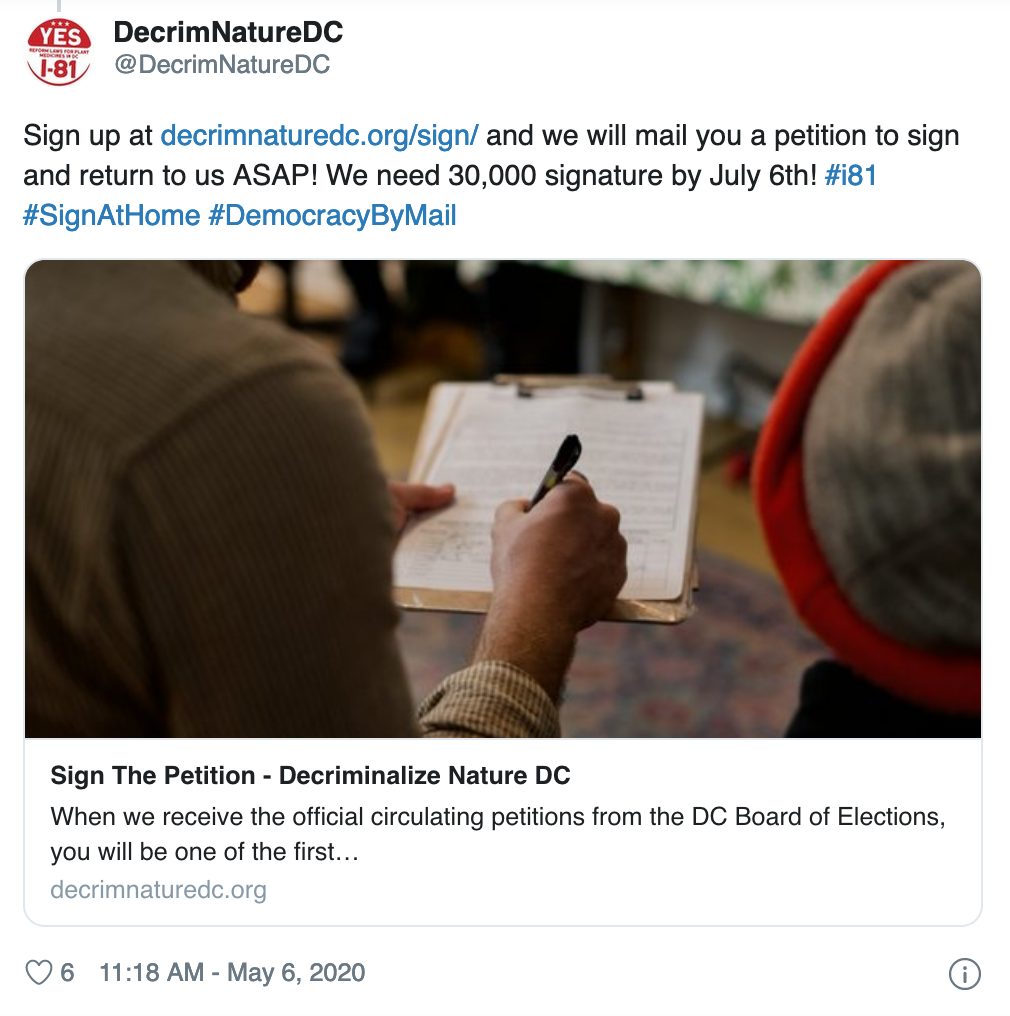 Psychedelics reform bills have been introduced in several state legislatures. On the congressional level, U.S. Rep. Alexandria Ocasio-Cortez (D-NY) introduced an amendment to encourage research into the medical potential of psychedelics.

The editorial mission of this publication is focused on marijuana investing. However, the profit potential of psilocybin is a related topic that I will continue to watch. As activists increasingly push to legalize or decriminalize magic mushrooms and other psychedelics, the trend is creating an additional tailwind for the already prevalent movement to normalize marijuana laws.

In the mainstreaming of hallucinogenic substances, we’re seeing the birth of a new consumer industry. “Power to the people” is poised to deliver profits to the investors.