In the first quarter of 2020, we witnessed the fastest bear market in history. The response of famed value investor and habitual optimist Warren Buffett? So far this year, he’s been a net seller of stocks, not buyer. For me, that’s a powerful bearish indicator.

Below, I’ll explain why you should be worried about Buffett’s uncharacteristic bearishness. I’ll also show you what you can do about it.

Warren Buffett’s Berkshire Hathaway (NYSE: BRK.A, BRK.B) is aggressively raising cash, to the tune of a record $137 billion by the end of March. That figure climbed even higher in April, with proceeds from the sale of airline stocks. Berkshire sold all of its stakes in the “big four” airlines in April, Buffett revealed at Berkshire’s annual meeting on May 2.

The annual meeting in Omaha is often referred to as “The Woodstock of Capitalism.” This year, the mood more closely resembled Altamont. The Berkshire confab was a glum, “virtual” affair missing all of the usual hoopla.

Berkshire’s first-quarter earnings report shows that it sold $6.1 billion in stock last month, all attributable to the dumping of shares of Delta Air Lines (NYSE: DAL), American (NSDQ: AAL), Southwest (NYSE: LUV), and United (NSDQ: UAL). Berkshire had an 11% stake of Delta, 10% of American, 10% of Southwest, and 9% of United.

Buffett said Berkshire lost money on its investments in the airline industry, although he didn’t give specific numbers. He explained matter-of-factly: “It turned out I was wrong.”

Buffett went on to say that the airlines were left with an excess of planes and faced a long, hard road to recovery after seeing passenger demand destroyed by the coronavirus pandemic. The airline industry on average is losing $350 million to $400 million per day.

How bad can it get for the airlines? For historical context, remember that Pan Am and TWA were colossal brands. They no longer exist.

When the music stops…

Buffett said that the airlines could be left with “too many planes” if people fly less than they did before. He noted that the carriers were saddled with massive government loans that they’d have to repay.

Buffett offered no mitigating circumstances or silver linings. When the music stopped, Buffett (of all people) simply didn’t have a chair.

Buffett also questioned whether people would be eager to get on airplanes again, even after quarantines are lifted. Overall, Berkshire posted first-quarter net losses of nearly $50 billion.

Read This Story: Just Another Brick in the Wall (of Worry)

Buffett’s downbeat tone lately is a far cry from the rah-rah optimism that he exhibited during previous financial crises. Notably, during the global financial crash of 2008-2009, Buffett rode in as a white knight to rescue blue-chip corporate icons, infusing them with cash and proclaiming his undying faith in the resiliency of American capitalism.

Then there’s the so-called “Buffett Indicator,” which is the market cap to gross domestic product (GDP) ratio. A gauge favored by the Oracle of Omaha himself, it’s a measure of the total value of all publicly traded stock in a country, divided by that country’s GDP.

Think of it as a broad way to assess whether a country’s stock market is overvalued or undervalued. Brace yourself for a possible wave of selling, because the Buffett Indicator for the U.S. currently hovers at a record high.

The U.S. Labor Department reported last Friday that a record 20.5 million jobs were lost in April, with the unemployment rate soaring to 14.7% from 4.4%. Unemployment stands at a post-World War II record. The jobless rate last month literally zoomed off the chart: 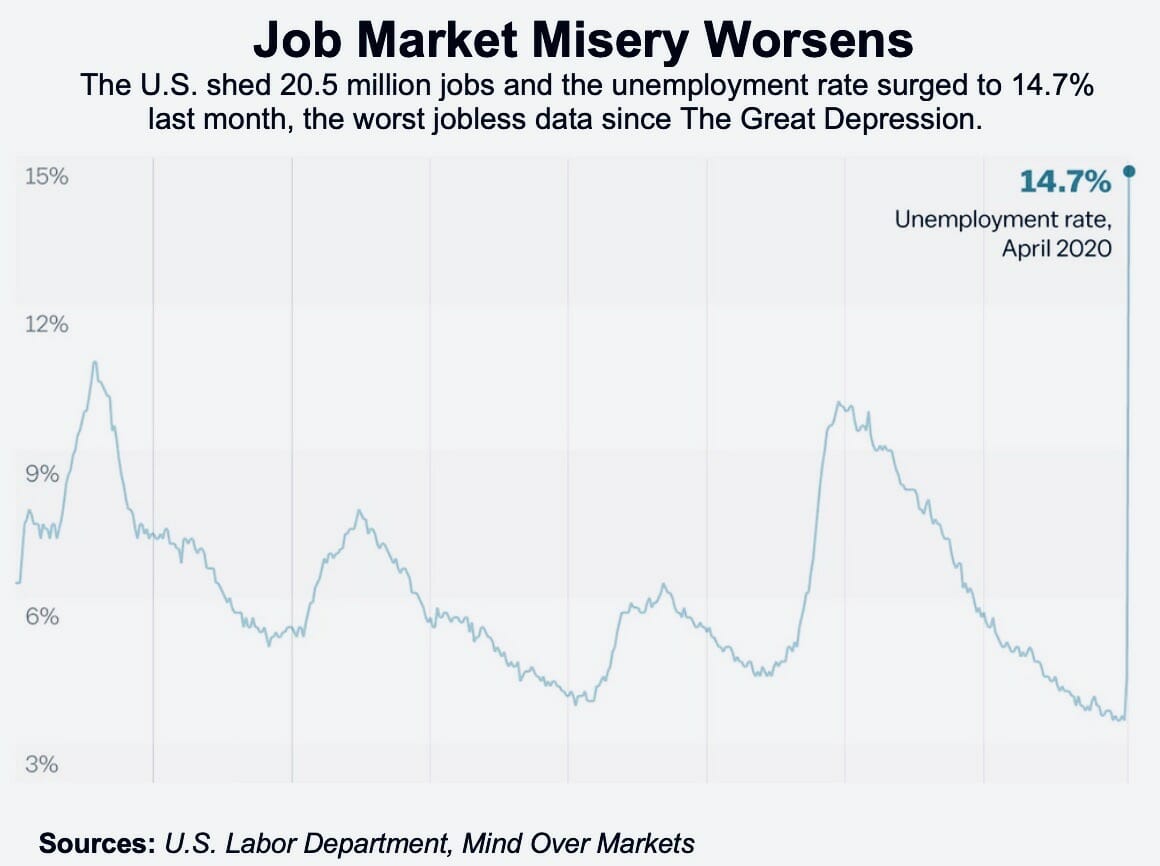 Investors last week shrugged off the bleak employment data, taking comfort from the fact that most of those layoffs are (supposedly) temporary furloughs.

As of this writing Monday morning, U.S. stocks were sliding as investors grew nervous about plans to reopen the economy. But overall, the stock market has staged a powerful rally from its late-March lows, propelled by aggressive fiscal and monetary stimulus. Since the coronavirus lows of March, bullish sentiment has been on the rise. 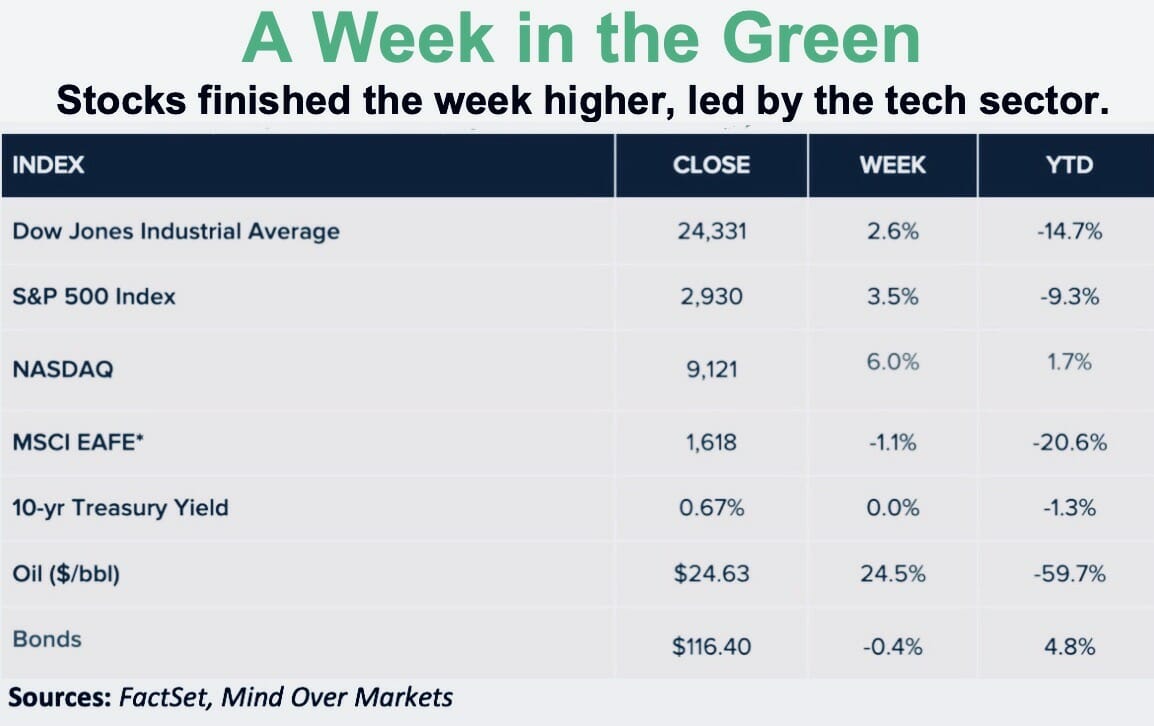 It’s important to note that the economy already was sputtering and due for a cyclical downturn, before the pandemic hit. Precedent is not encouraging.

Previous recessions in the post-World War II era lasted an average of 14 months. On average, it took more than seven quarters, or nearly two years, for total GDP to return to pre-recession levels. The jobless rate in 2009 reached 10% and took more than five years to get cut in half.

Consumer spending accounts for about three-quarters of the U.S. economy. Even as businesses reopen, resumption of consumer activity won’t follow a linear path upwards.

From my own personal standpoint, even if the local lockdown ended tomorrow, I wouldn’t be in a hurry to rush onto an airplane or walk into a restaurant.

Our society will never be the same. This year, when asked at the Berkshire meeting when he would become bullish again, Buffett simply shrugged and said: “We’ll see.”

In fact, Warren Buffett said the $137 billion worth of cash that Berkshire had on hand “isn’t all that huge when you think about worst-case possibilities.” Yikes. Let that sink in.

In the meantime, if you’re looking for a hedge against another market crash, consider increasing your exposure to gold. The yellow metal can protect your portfolio from the sort of risks that bedevil even Warren Buffett, while also offering capital appreciation.

Gold has been on a tear and it probably has further to run. Gold currently hovers at a price of $1,707 per ounce (as of Monday morning). Gold deserves a place in your portfolio. Under current market conditions, 5%-10% of your portfolio should be in precious metals such as gold. Looking for the best investment play on gold? Click here for details.