Reefer Madness, the 1936 anti-marijuana propaganda film, is now an unintentionally hilarious cult classic. The opening scene depicts a high school principal warning his students: “Not alcoholism, not opium, not cocaine, but marijuana is the worst drug corrupting the youth of America.”

For decades thereafter, most Americans were avidly anti-pot. And today? All the polls show that a firm majority believe marijuana should be legalized. The average citizen has embraced pot, which is good news for investors in the sector.

According to a new poll, people who live in states that have legalized marijuana for adult use generally feel that the policy has been a success, A majority of people from eight states that were surveyed said the programs are working well.

The poll results were announced to the public in a tweet posted on May 13 by the research firm YouGov:

For these citizens, marijuana legalization isn’t an abstraction. They’re living with the consequences of legalization and they like what they see.

YouGov asked more than 32,000 people the following question: “In the states that have decided to allow recreational marijuana use, do you think the legislation has been a success or a failure?”

They were given five options: “Success only, more of a success than a failure, more of a failure than a success, failure only or don’t know.” The following chart breaks down the results: 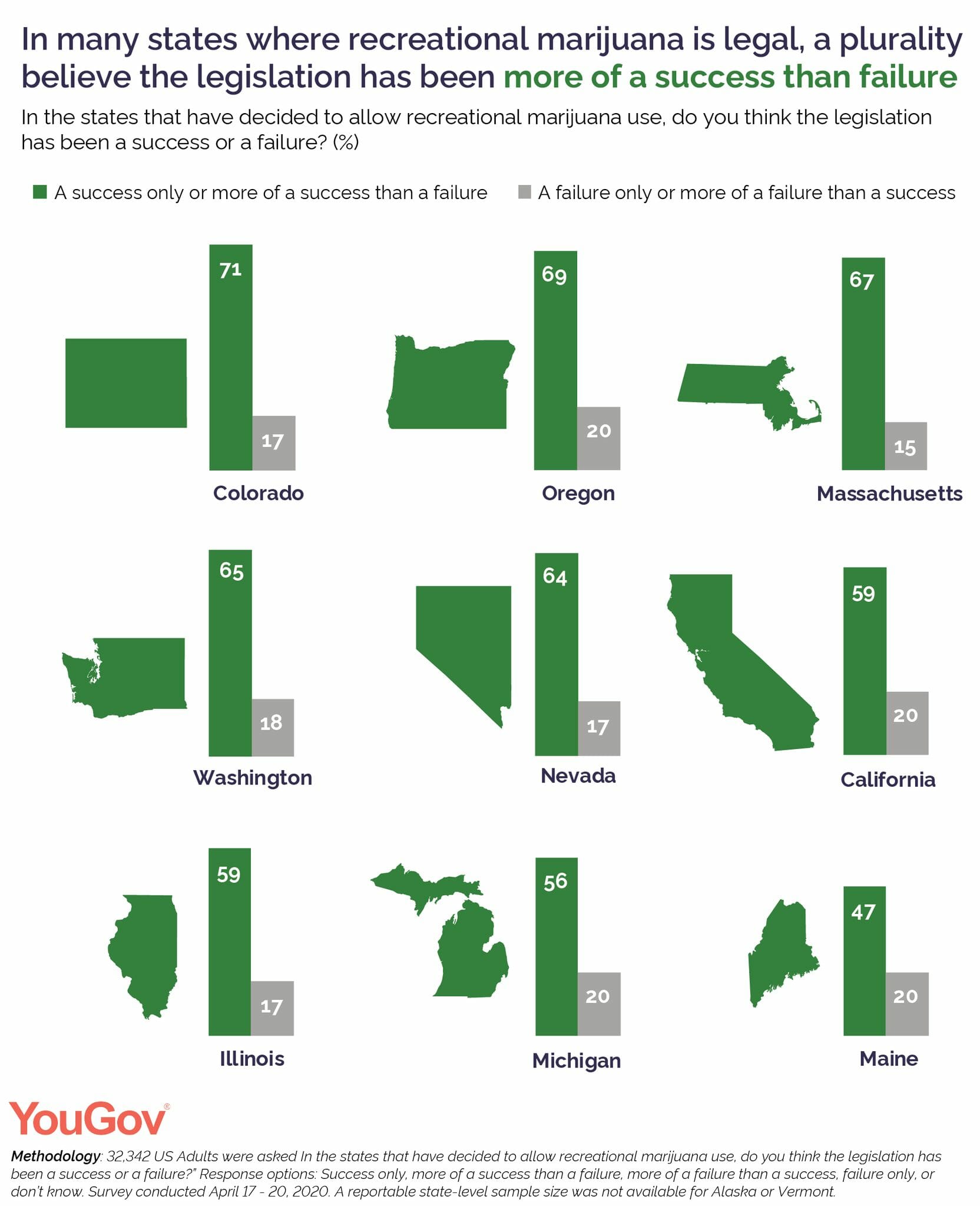 The “devil’s weed” no more…

It was in the late 1980s and early 1990s that public opinion about marijuana started to shift. In a landmark event, no less an authority than DEA Administrative Law Judge Francis L. Young surprisingly wrote in 1988:

“Nearly all medicines have toxic, potentially lethal effects. But marijuana is not such a substance. There is no record in the extensive medical literature describing a proven, documented cannabis-induced fatality … Simply stated, researchers have been unable to give animals enough marijuana to induce death … In practical terms, marijuana cannot induce a lethal response as a result of drug-related toxicity … In strict medical terms marijuana is far safer than many foods we commonly consume … Marijuana, in its natural form, is one of the safest therapeutically active substances known to man.”

A major catalyst for attitudinal and legal changes for marijuana occurred in 1996, when the voters of California agreed to allow patients and their caregivers to possess and cultivate marijuana for therapeutic purposes.

Known as the California Compassionate Use Act, Proposition 215 created the country’s first open marijuana market and, more recently, has given birth to a wave of state legalization laws (both medical and recreational) that have made possible a new industry that revolves entirely around a plant that has been used by civilization for thousands of years.

Exactly how marijuana should be legalized is the big question that directly affects investors. That’s why Marijuana Investing Daily continues to monitor the evolving legal landscape for cannabis.

Arcview Market Research and its research partner BDS Analytics estimate that spending on legal cannabis worldwide accelerated in 2019, soaring 38% to $16.9 billion, and should eventually reach $31.3 billion in 2022, growing at a 26.7% compound annual growth rate over the five-year frame from 2017. The estimates call for a $57 billion worldwide market by 2027, a figure that exceeds the annual gross domestic product levels of nine U.S. states.

Yes, marijuana equities went through a brutal downturn in late 2019. But now, you can find attractive bargains in the sector. Keep an eye out for our announcements about new opportunities in “canna-business.”