The Recovery Will Dance to a Fast Latin Beat

When it comes to emerging markets, Wall Street is a drama queen. Emerging market stocks have passed in and out of vogue over the past two decades. Investors have fluctuated from unbridled enthusiasm about their growth prospects to intense hand-wringing about their riskiness.

The manic-depressive behavior over emerging markets returned this year amid coronavirus uncertainties. The region’s economies aren’t faring well. Notably, the bellwether country of Mexico on Monday reported dismal economic data. Emerging market economies as a whole are in the dumps.

And yet, as of this writing, global stocks are springing to life. Stock markets are forward looking and economic reopening is spawning optimism.

Emerging markets are likely to bounce back the sharpest in the post-COVID world, Latin America in particular.

To be sure, there’s still plenty of bad news to go around to make the rally precarious. Emerging markets certainly aren’t out of the woods.

Mexico on Monday reported its largest trade deficit on record. Mexico is the region’s second-largest economy and as such exerts outsized influence, especially in regional supply chains. The country in April racked up a $4.29 billion trade deficit, versus a trade surplus of $1.87 billion in March and surplus of $1.51 billion in April 2019. Last month’s deficit was the largest on record, according to data dating back to 1991, as exports dropped 37.7% and imports fell 21.9%.

The coronavirus pandemic clobbered demand for Mexico’s products across the board, with the crucial automotive sector among the worst victims. Analysts at JPMorgan Chase (NYSE: JPM) estimate that Mexico’s economy will post a whopping 40% decline in the second quarter compared to the previous quarter.

But here’s the good news: Mexico and other major Latin economies are expected to gain traction in 2021. Although under pressure now, Latin America is poised for a pronounced rebound (see chart). 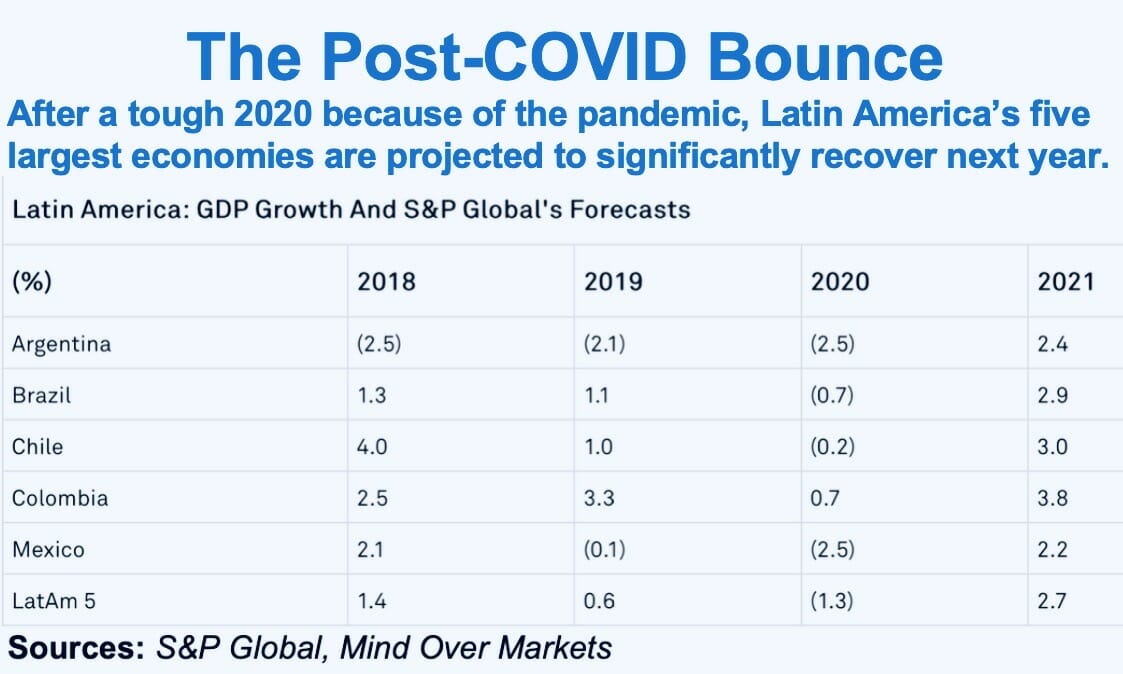 Stretching from the northern border of Mexico to the southern tip of South America, Latin America is home to more than 630 million people. The region snapped back in 2017 from a bleak 2016, with growth accelerating in 2018 and 2019. Then coronavirus came along in 2020 and the economic trajectory was abruptly reversed.

Mexico’s current woes are mirrored not just by Latin America but emerging markets throughout the troubled global economy. As is typically the case during financial market crashes, emerging markets have borne the heaviest burden since the outbreak of COVID-19.

But emerging markets, Latin America in particular, are positioned to lead the post-COVID rebound. Latin America enjoys favorable demographic trends that will make its countries solid long-term bets once the virus has left the stage. The current upswing in the price of oil and other key commodities is a sign that the recovery for emerging markets isn’t far off.

Latin American governments are struggling with coronavirus-induced recessions, as is the rest of the world, but Latin leaders have stepped up to the plate with significant stimulus measures that will pay off down the road.

Economic tailwinds for Latin America include population growth, rising education levels, increasing technological savvy, and the expansion of a free-spending consumer class that skews toward a younger demographic. Major improvements have been made in terms of life expectancy, infant mortality and other key metrics that reflect quality of life. These advantages apply to other emerging markets but Latin America occupies the vanguard.

Consider Mexico, the country mentioned at the top of this story. Mexico is the world’s fourth-largest auto exporter, a statistic that surprises many people. It’s also the eighth-largest producer of oil. Mexico manufactures and exports the same amount of goods as the rest of Latin America combined.

Our southern neighbor possesses inherent strengths that will hold it in good stead when the pandemic ends. Easing the way is the United States-Mexico-Canada Agreement, or USMCA, that replaced the NAFTA agreement that governs trade in North America.

Emerging market countries currently represent about 59% of total global GDP, a proportion that will continue to grow (see chart). 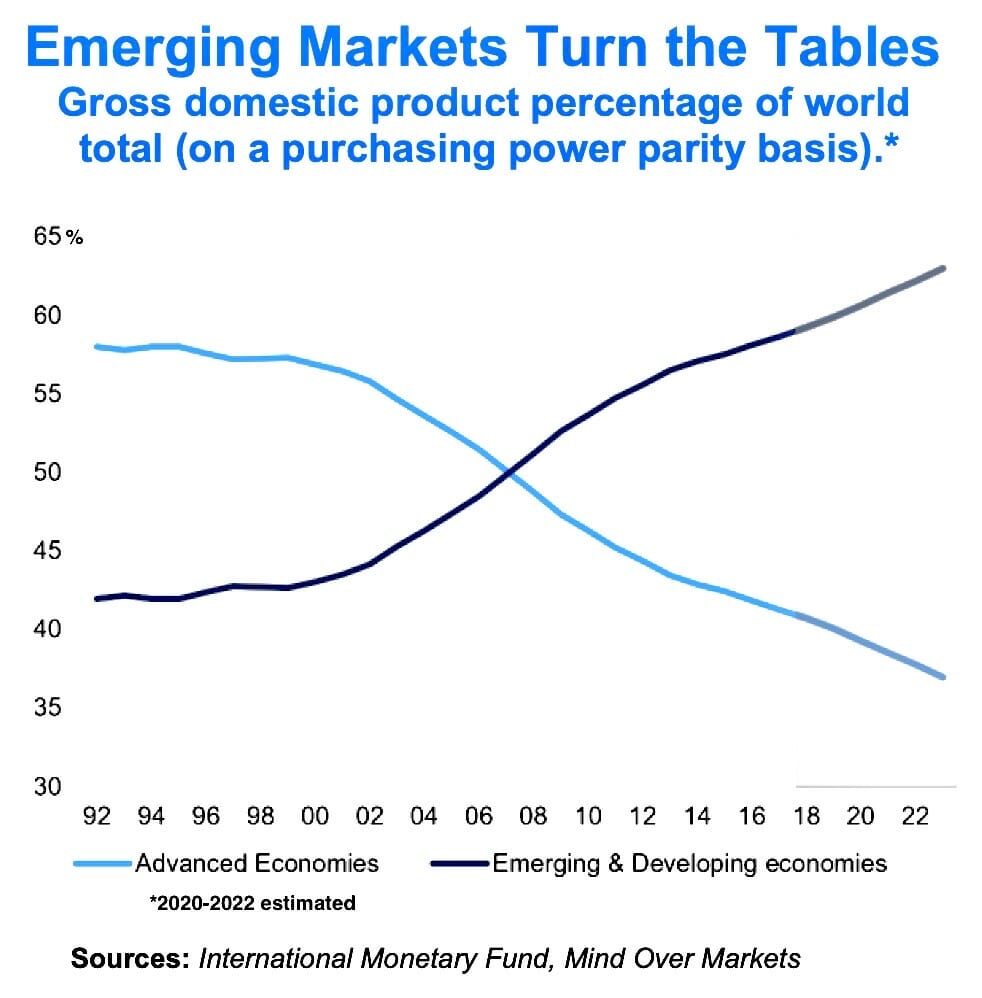 While sputtering global trade is currently hurting export-driven countries, the next stage of emerging market growth will be driven by value-added industries and developing digital infrastructure. Ecommerce, artificial intelligence, social media, and cloud computing will reign in developing countries that have historically relied on commodities and manufacturing.

Throughout emerging markets, we’re seeing greater credit and debit card usage; the proliferation of social media and group shopping sites; enhanced online security that reinforces consumer confidence; and an expanding pool of “e-tailers” that reach customers through their websites.

Latin American policymakers are plowing considerable sums into infrastructure spending, including Internet development, and pursuing policies designed to shift their economies from a heavy dependence on exports toward domestic demand.

Latin governments also are implementing reforms such as individual and corporate tax relief, minimum wage hikes and business deregulation, all designed to boost indigenous consumption. A salient tech trend and investment opportunity in the region is the roll out of 5G wireless.

Watch the Following Video Update: The Economic Road From Here

Every portfolio should reflect global diversification. When it comes to overseas investing, the news media tend to focus on China and its Asian neighbors, but investors are leaving money on the table if they ignore emerging markets such as Latin America. When it finally arrives, the global economic recovery will dance to a fast Latin beat.