Protests Increase the “Buzz” Over Marijuana

What do current protests over police brutality and marijuana stocks have in common? Probably more than you realize.

Case in point: Sen. Cory Booker (D-NJ) this week has been underscoring racial disparities in marijuana enforcement that he says should be addressed by Congress and state legislatures.

Presumptive Democratic presidential nominee Joseph Biden has been making similar remarks, all of which indicates that marijuana remains front and center in the public forum. And that’s a tailwind for marijuana investments.

As protests continue in response to a Minneapolis police officer’s suffocating George Floyd to death, Booker asserts that it’s crucial for people to be “actively confronting the truth within our society of raising it up so there can be a deeper healing.”

In recent media interviews, Booker has been contending that racial disparities have long existed within the U.S. criminal justice system. As a key example he cites disparate enforcement of cannabis criminalization against minority communities.

“These are data points that do not speak to the heart and the grievous realities that each one of those data points impact the lives of people who are being destroyed. People can’t get a job, can’t get a loan from the bank for doing things that two of the last three presidents have admitted to doing.”

Sen. Booker recently reintroduced legislation in the Senate to legalize marijuana nationwide and expunge federal convictions for possession or use of the drug. Several states already have moved to expunge convictions for pot arrests.

Booker also has stated that patients should be ensured medical marijuana access amid the COVID-19 pandemic: “For people that need it for their post-traumatic stress, for the seizures that they may have, for serious medical conditions, I’m hoping we prioritize those people so they can get the medicine they need.”

Read This Story: Pot Stocks: How to Pick the Pandemic Survivors

Responding to the rioting in American cities, Virginia Gov. Ralph Northam (D) this week cited a marijuana decriminalization bill he recently signed as an example of how Virginia is addressing racial inequities. Northam asserted:

“Through 400 years of American history—starting with the enslavement of Africans, through Jim Crow, massive resistance and now mass incarceration—black oppression has always existed in this country, just in different forms. I cannot know how it feels to be an African American person right now or what you are going through. I cannot know the depth of your pain. But what I can do is stand with you and I can support you, and together we’re going to turn this pain into action.”

Back in the spotlight…

After getting sidelined by dire headlines about the pandemic-induced economic recession, the marijuana industry is front and center in the news again. Small wonder that pot stocks are making a big comeback, after the correction they endured in late 2019.

Take a look at the following three-month price chart, which compares the benchmark Cannabis ETF (THCX) with the S&P 500 index. Over this time frame, THCX has gained 12.62%, compared to 3.98% for the S&P 500: 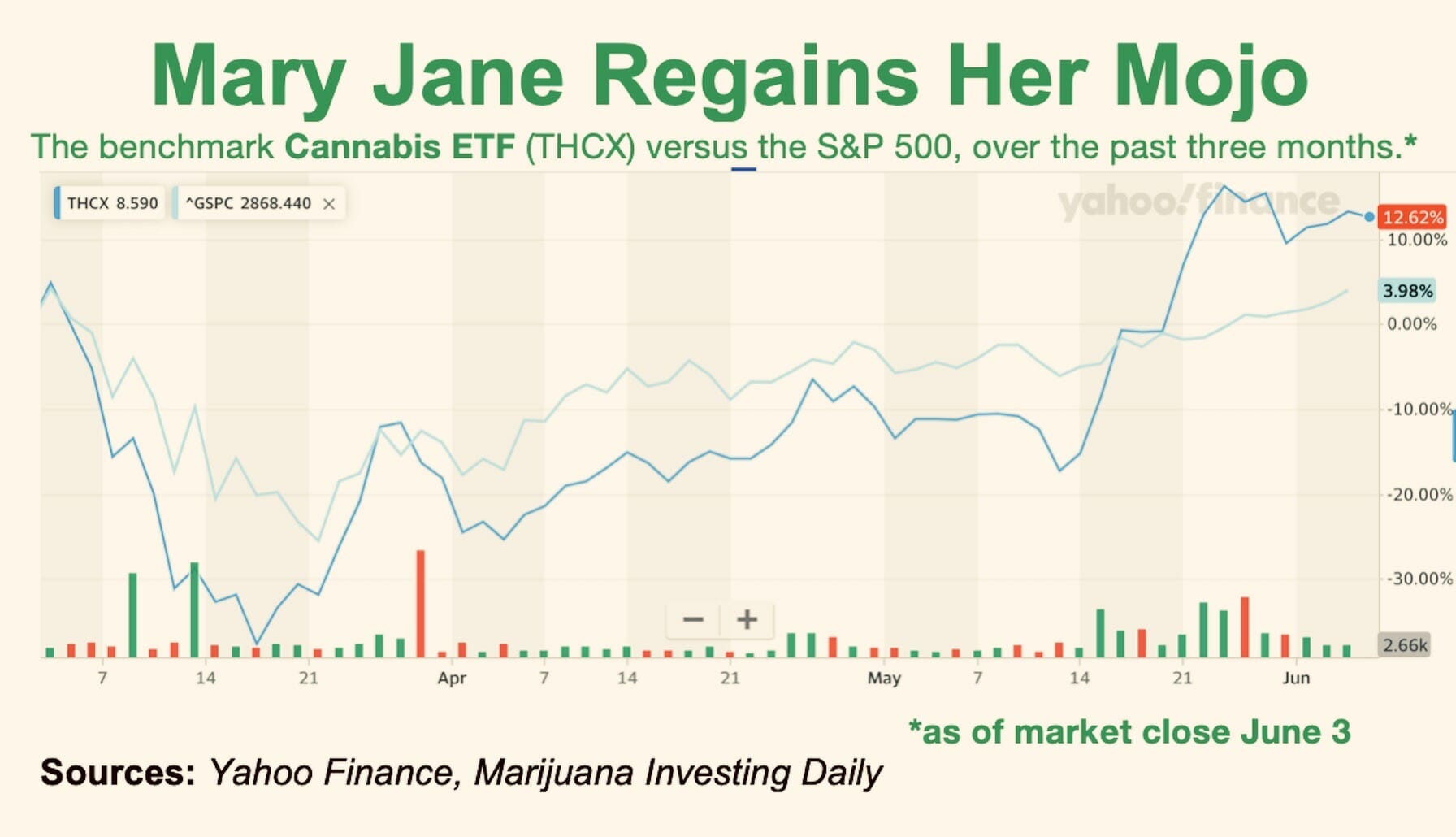 As thinly capitalized marijuana stocks fall by the wayside, the larger-cap players that dominate the industry have enjoyed rising sales, better economies of scale, improving cash flow, and greater market share. This industry consolidation has been bad for weak penny stocks but manna for the well-financed “big boys” of pot.

Indeed, marijuana company managers feel confident enough about the stability of cannabis demand to begin seeking new avenues of growth, such as the burgeoning interest in psychedelics.

Companies that grow, process and sell magic mushrooms are in their infancy, as was the case when marijuana legalization was about to take off. The best time to profit from accelerating trends is early, before the rest of the investment herd catches on. The movement to legalize psychedelic mushrooms is an exciting development that will make proactive investors wealthy.

In the meantime, marijuana is a permanent fixture in the nation’s political dialogue and consumer culture. Looking to profit from all of the “buzz” over marijuana? Every retirement portfolio should have at least one marijuana stock. The problem is finding the right marijuana investment. Some pot stocks are poised to make investors rich. Others are destined to go bust.

The good news is, our stock-picking experts have unearthed hidden gems in canna-business that most investors don’t even know about. For our latest research on the best pot stocks, click here.