When I was a teenager living at home, my parents used to sniff around my room like bloodhounds, looking for signs of illicit marijuana use. These days, they’re asking me about the benefits of marijuana for their various aches and pains. For me, that’s quite a cultural shock.

Now I’m bracing for the next cultural dislocation: the mainstreaming of psychedelics. One day, will my octogenarian mom put psilocybin fungi (aka, magic mushrooms) into the family’s omelettes and spaghetti sauce? Strange days, indeed. But for early investors, potentially lucrative days as well.

Activists pushing for the normalization of laws governing magic mushrooms and other assorted psychedelics are gaining political clout throughout the United States. Let’s start with the nation’s capital.

Street protests over the past week in Washington, DC have helped generate about 5,000 new signatures for a local psychedelics decriminalization measure. Activists announced today that they are mailing petitions to every registered voter in the city as part of their campaign to place the initiative on the November ballot.

The proposal, dubbed I-81, would make enforcement of laws against various psychedelic substances such as magic mushrooms, ayahuasca and ibogaine among the city’s lowest law enforcement priorities. The group spearheading the effort, Decriminalize Nature DC (DNDC), has until July 6 to submit about 30,000 valid signatures from registered voters to qualify for the ballot.

Magic mushrooms are wild or cultivated mushrooms that contain psilocybin, a naturally occurring psychoactive and hallucinogenic compound. An increasing body of research is showing that these mushrooms confer physical and psychological benefits.

National protests in the wake of George Floyd’s death at the hands of Minneapolis police have merged with demonstrations of support for decriminalizing marijuana and psychedelics.

In tandem with the George Floyd controversy, the social disparities in marijuana sentencing are coming to the fore. Marijuana legalization is accelerating, which only helps the industry’s sales and profits. This dynamic is fueling a significant rebound in pot stocks, after their brutal decline in late 2019. The next big thing along these lines? Psychedelics. 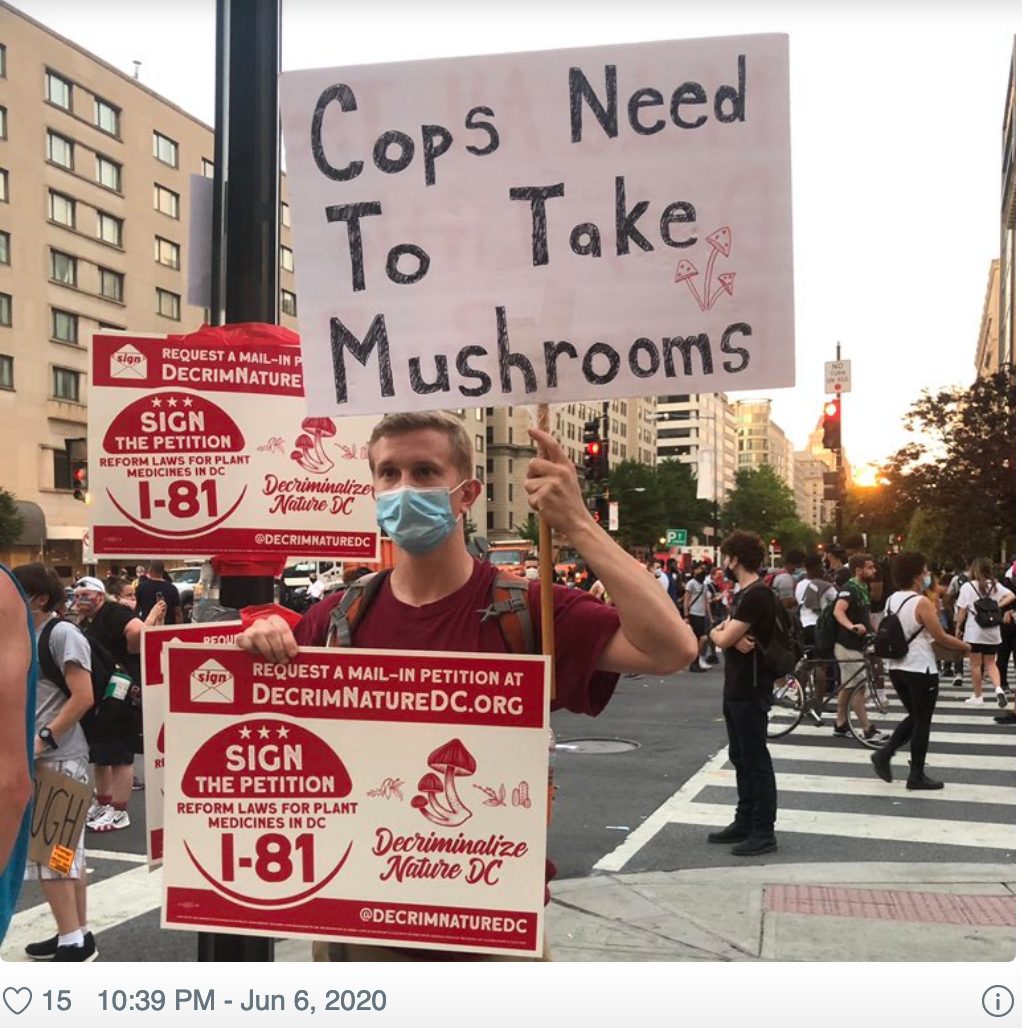 Pro-psychedelic activists ran headlong into a major impediment earlier this year when they had to suspend in-person signature gathering because of the COVID-19 outbreak. However, local lawmakers gave them a helping hand when the DC Council approved emergency legislation allowing for alternative collection methods. DNDC then launched a test, sending 10,000 petitions to residents across the city and asking them to sign and return them.

In the four weeks since that initial mailing, nearly 8% have been returned with valid signatures and the success rate is expected to increase. The test encouraged activists to repeat the process on a wider basis by mailing packets containing the petition to about 220,000 addresses, which represents every household in the city with at least one registered voter. Voters must send in their signature sheets by June 26.

This past week’s demonstrations against police brutality have prompted DNDC to emphasize in their messaging the role of the drug war in racial injustices. The group stated in a press release:

“As a campaign of concerned DC citizens focused on reforming police priorities and enacting this small step to end the war on drugs in the District of Columbia, Initiative 81 compliments policing reforms demanded at ongoing Black Lives Matter protests which DNDC has attended and supports.”

The movement to decriminalize psychedelics is gathering steam around the country, reminiscent of the early days of marijuana decriminalization. Psychedelics reform bills have been introduced in several state legislatures.

Our stock-picking experts have unearthed hidden gems in canna-business that most investors don’t even know about. For our latest research on the best pot stocks, click here.

In the meantime, I’ll keep an eye out for potentially lucrative opportunities in the realm of magic mushrooms. Watch this space, for the imminent announcement of a special presentation on the money-making power of ‘shrooms.