This is John Persinos, editorial director of Investing Daily, with a video update for Monday, June 15. For an amplification of my video remarks, read the article below.

Let’s assess the situation as it stands now, courtesy of the coronavirus:

Despite lockdowns that battered the U.S. economy, cases of COVID-19 are actually rising in several states, with reports of record hospitalizations. Street protests are helping spread the virus and planned political rallies will make the situation worse. Some cities are experiencing disastrous spikes in cases and they’re considering re-imposing stay-at-home orders.

The warnings of health experts that re-openings were premature appear to be vindicated. Investors fear renewed lockdowns and economic damage, dashing hopes of a rapid recovery. 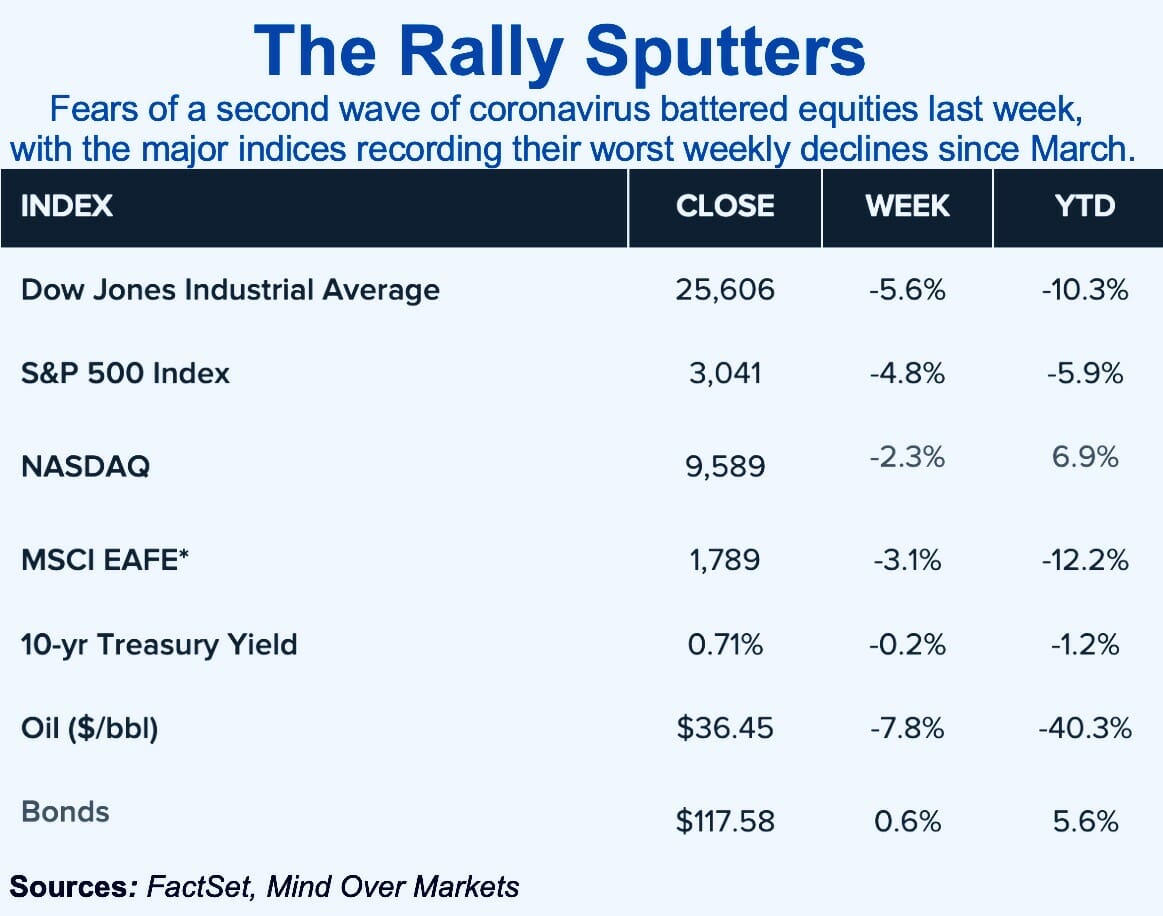 After a record push higher from its March low, the overbought market has finally run out of steam as the negative news becomes too overwhelming to ignore. Volatility is likely to stay with us, as the race for the White House heats up and civil discord worsens. I haven’t witnessed a presidential cycle this tumultuous since 1968.

In pre-market futures trading Monday morning, the three main U.S. stock indices were poised to extend their losses and open sharply lower, as investors pulled their heads out of the sand and realized that COVID-19 wasn’t done clobbering the economy.

The market last week recorded its first three-day losing streak since February, with a 1,800-point drop in the Dow on Thursday that harked back to the wild swings of the February-March crash.

From trade war to cold war…

Then there’s the flare up in trade tensions between the U.S. and China, which threatens to become an all-out cold war. Investors have been underestimating the potential damage of the Sino-American rift. The trade war hasn’t abated. On the contrary, it has extended its scope.

A bill recently passed the Senate that would mandate the delisting of Chinese companies from U.S. stock exchanges if they don’t follow strict accounting criteria. But the anti-China hawks in Washington want to take matters further. They blame China for the coronavirus and they’re keen to exact revenge.

The trade warriors currently threaten to “decouple” (as they put it) the world’s two largest economies, by forcing U.S. companies to sever ties with China. Assuming this improbable goal were even possible, such a decoupling would hamper, not stimulate, economic growth in the U.S. Many of the low-skilled tasks currently performed by Chinese workers would be shifted to plants in even lower-cost countries, such as Thailand, Vietnam, Bangladesh, and Indonesia.

For the sake of argument, let’s say entire production lines are relocated from China to America. This process would take years to accomplish and, in the end, most of the work would be undertaken by robots anyway. Indeed, the greater use of robotics will be one of the investment opportunities when the pandemic crisis has finally run its course. Many Americans who were furloughed or laid-off during the outbreak will never get their jobs back.

Those who confidently proclaim an imminent V-shaped recovery are simply acting as cheerleaders, without facts to back them up. Regardless, the Sino-American trade battle is an impediment that diminishes the chances of a fast recovery from the coronavirus-induced recession.

In February, certain policymakers appeared on television to reassure the public that the coronavirus was “contained” and the economy would be fine. Wrong. Last week, the same officials confidently predicted that the virus was waning. Wrong again. In fact, the so-called second wave could simply be the first wave demonstrating its persistence.

Don’t try to time the market. That’s a fool’s game. We witnessed the fastest bear market in history in March, followed by an astonishing rebound that’s turning out to be a bear market rally. No one shoots a flare gun to announce a major turning point in the market.

But corrections can be healthy; they restore equilibrium. The stock market is forward looking. You should be, too.

Once the global economy gets on the other side of the coronavirus, many companies will find themselves in a competitively advantageous position. The pandemic is causing shifts in buying habits, consumer expectations and workplace practices. The winning companies will occupy such segments as remote and mobile applications, artificial intelligence, 5G (“fifth generation”) wireless, cloud computing, and the aforementioned robotics.

Another positive factor to remember is that the Federal Reserve remains committed to injecting massive amounts of stimulus into the capital markets, which buoys asset prices.

The coronavirus is giving birth to disruptive technologies that will in turn create new industries and products. From this “creative destruction,” we’ll witness exciting investment opportunities. Keep plenty of cash on hand (roughly 45% of assets right now, as a general rule of thumb) to pick up stakes in the emerging stars of the post-COVID world.