The Limits of Washington’s Largess

With apologies to William Shakespeare, current deliberations in Congress about further fiscal stimulus are full of sound and fury, signifying nothing. I’ve previously worked as a congressional staffer on Capitol Hill, so I know political posturing when I see it. More on that, below.

First, let’s look at where the markets have been and where they’re probably going.

U.S. stocks closed mostly lower Wednesday, as investors digested the bad news of rising coronavirus cases. The Dow Jones Industrial Average fell 0.65% and the S&P 500 shed 0.36%. The tech-heavy NASDAQ rose 0.15%. Stocks in industries that would benefit the most from economic recovery (e.g., travel and hospitality) fell the hardest.

In pre-market futures trading Thursday morning, the three main indices were all poised to open in the red. The adrenaline on Wall Street generated by robust retail sales is wearing off in the face of COVID-19 anxieties.

Read This Story: The American Shopper Rides to the Rescue

A recent white paper from Harvard University provides evidence that state reopenings endanger public health without significant economic benefit. The paper also points out that the majority of federal financial assistance has gone to large-cap companies at the expense of smaller ones. Loans and stimulus checks haven’t been enough to keep many small businesses afloat. We can expect to witness a tsunami of business bankruptcies this year, especially in the energy sector.

Hopes for a vaccine persist, but as I’ve counseled, you should tune out the hype over potential treatments. We’ve seen these hopes wax and wane ever since the pandemic became apparent in early 2020. To date, no silver bullet has emerged but we’ve endured a lot of quackery.

Fears of a resurgence in COVID-19 persist and with good reason. Several states are reporting record hospitalizations due to the virus. Arizona, Florida and Oklahoma are among the states suffering a spike in new infections as businesses reopen. At the same time, China has reimposed social distancing in an attempt to contain a new outbreak. The coronavirus is an elusive foe. Even if daily cases drop to zero, the virus can reappear at a moment’s notice.

All of this means we’re unlikely to witness a V-shaped recovery, despite the election year cheerleading for one. The scenario is more likely to be W-shaped (or perhaps U-shaped). The economic damage from the pandemic won’t abate anytime soon.

The Federal Reserve understands that aggressive government action is needed. In congressional testimony Tuesday and Wednesday, Federal Reserve Chair Jerome Powell vowed to use the Fed’s “full range of tools” to assist the recovery.

Encouraging economic data, such as the blockbuster retail sales report for May, and trillions of dollars in monetary and fiscal stimulus have pushed stocks higher from their late-March trough. But the rally isn’t sustainable, given weak fundamentals.

Infrastructure: all talk, no action…

The crumbling infrastructure of the U.S. continues to present a litany of woes: unreliable mass transit; collapsing bridges; exploding tanker cars; leaking pipelines; pockmarked roads and highways. America may be the globe’s biggest economy, but its infrastructure often resembles a banana republic.

The urgent need to fix infrastructure is a headache for government leaders but a huge bonanza for investors who choose the right infrastructure stocks.

The intricate political compromises needed to enact a massive infrastructure bill aren’t possible in a presidential election year, especially in 2020 when both parties are waging bitter partisan warfare. Democrats prefer the sort of top-down, taxpayer-funded plan that Republicans tend to dislike. In turn, the GOP indicates a preference for public-private “partnerships” that Democrats reject.

Which is a lost opportunity, because greater infrastructure spending would address the chronic problem of crumbling roads and bridges and also put people to work at a time when the unemployment rate is expected to hit 20%. 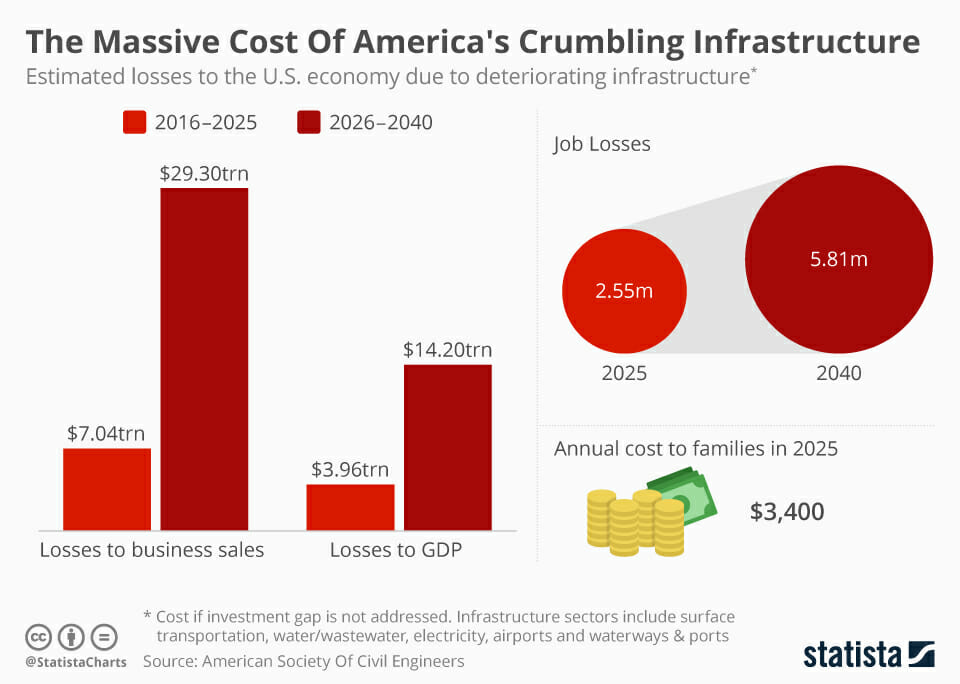 Until this unruly presidential election is over and the pandemic is genuinely contained, stay cautious. Consider the many investment themes I’ve outlined in previous issues of Mind Over Markets and “nibble on the edges” when bargains emerge in these sectors. As a defensive measure, use stop losses.

In the meantime, COVID-19’s damage to the economy makes “pump priming” an imperative. Congress in March passed the CARES Act, a $2.2 trillion fiscal spending package that provides a lifeline to families and businesses most affected by the coronavirus. Business leaders and even Powell himself argue that more needs to be done.

However, lawmakers are hesitant to enact another big legislative package to combat the economic damage from COVID-19, largely due to the ideological objections of key lawmakers against government spending. In addition, most of the money has gone to businesses with scant oversight to ensure it’s going to the right places.

The Fed has stepped into the breach, by infusing $2.9 trillion into financial markets. Powell this week assured Congress that the U.S. central bank stands ready to do whatever it takes to support the economy.

If you’ve enjoyed the stock market’s rebound from its coronavirus lows in March, you mostly have the Fed to thank. But don’t expect Congress to loosen its purse strings any further, despite political rhetoric to the contrary.

Stocks are on wobbly ground and additional sell-offs are likely over the near term. Washington’s largess has limited ability to forestall these reckonings. Keep your eye on the fundamentals and the hard data (especially corporate earnings) and tune out the gasbags in the echo chamber.