Magic Mushrooms: The Doctor Is In

Marijuana legalization gets a lot of media attention and rightfully so. There are now 1,618 cannabis-related bills moving through state legislatures and Congress for 2020 sessions.

But the press tends to give short shrift to the legalization of psychedelics. And that’s good news for investors, because the real money is made before a trend becomes obvious to everyone.

Here’s something that most of the media missed but which caught my eye. A report from the federal Creating Options for Veterans Expedited Recovery Commission (COVER) appointed by President Trump and congressional leaders recommends expanding research into the potential of marijuana and psychedelics to treat military veterans with post-traumatic stress disorder (PTSD) and other maladies.

COVER held public meetings; met with a wide range of organizations and medical care givers; conducted site visits to Veterans Affairs (VA) facilities in different regions; and directly interacted with veterans across the country through a variety of channels, including one-on-one interviews and focus groups.

The final report was released in February 2020, after 18 months of meetings. Key excerpts of the report:

“Medical cannabis and psychedelic drugs may have uses in treating mental health issues among veterans; however, these substances are currently classified as Schedule 1 under the Controlled Substances Act, which precludes VA from conducting research on their efficacy…

“The U.S. federal government’s policies have blocked externally valid, randomized clinical trials on the effects of cannabis. Scientists seeking to conduct research on cannabis must submit to an arduous application process that may last years. The research requires approval from multiple government agencies, including some with stated opposition to any therapeutic uses of cannabis.”

The commission issued this recommendation: The VA Department should “engage with other federal agencies, as appropriate, to research the potential short- and long-term risks, as well as benefits, of medical cannabis and psychedelic drugs.”

COVER is in good company. A team of researchers at the Johns Hopkins School of Medicine recently documented the beneficial mind-alerting effects of magic mushrooms, via a clinical study using a group of volunteers (see graphic). 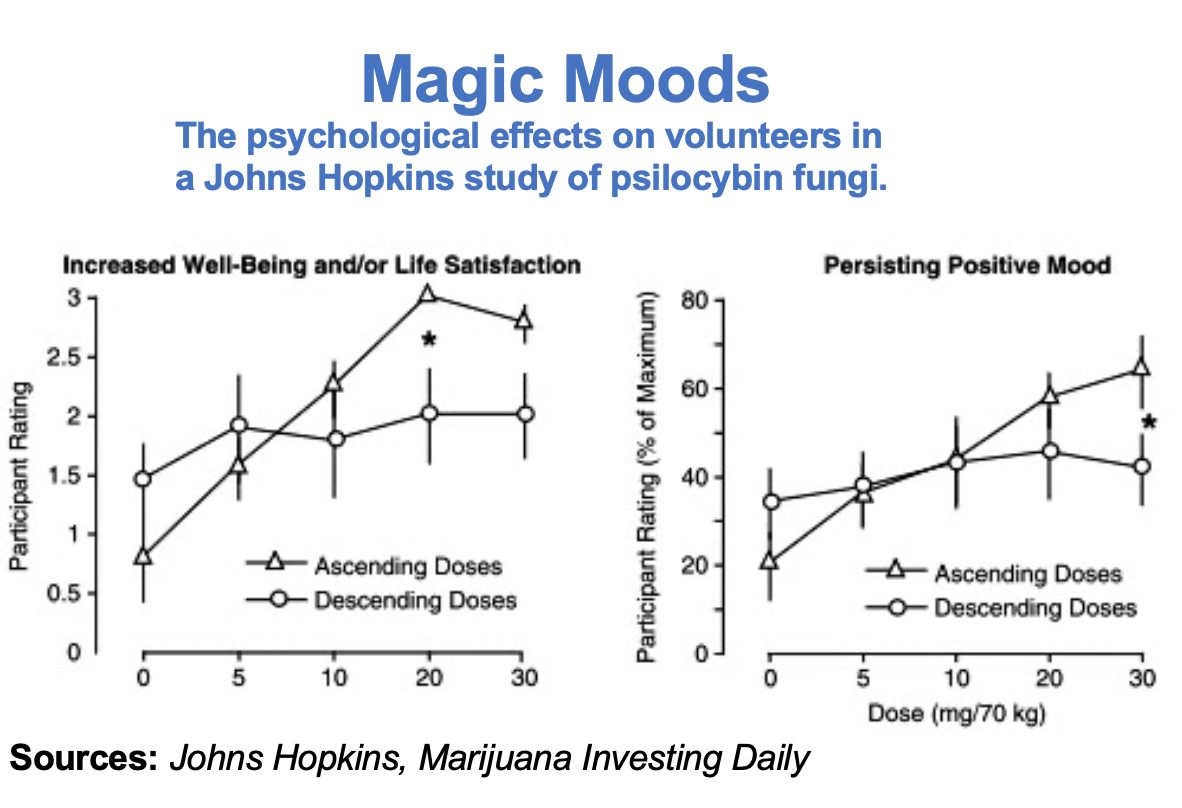 A movement is growing across the country to legalize magic mushrooms, which remain illegal at the federal level (as does marijuana).

The catalyst occurred in Denver, after voters in 2019 approved a ballot measure that made the city the first in the U.S. to classify offenses related to the psychedelic fungus among the lowest law enforcement priorities.

Health experts don’t consider psilocybin to be addictive, but the substance fell under the net of the federal government’s War on Drugs. States and localities are stepping into the breach.

In started last year in the Mile High City. The Denver ordinance seeks to reduce “to the greatest extent possible” criminal penalties imposed by the City of Denver “for the personal use and personal possession of psilocybin mushrooms.” Scores of cities are now trying to follow suit.

Small businesses are emerging in Denver to meet the burgeoning demand for psychedelic mushrooms. The city’s nascent ‘shroom industry is on track for boom times, a dynamic that will be repeated throughout the country as other ordinances go into effect. Notably in recent months:

For traumatized veterans and others with psychological disorders, psychedelic therapy combines drugs like psilocybin with traditional psychotherapy to re-boot the brain and create new neural pathways. A recent report published in Psychiatry Research provides empirical evidence that psilocybin is effective in the treatment of depression and anxiety.

This year, the first biotechnology firms to develop medical treatments from psychedelic drugs such as psilocybin have gone public on Canadian stock exchanges.

An increasing number of neuro-pharmaceutical companies are operating clinical drug trials of psychedelic treatments and some have even gotten the green light for testing from the U.S. Food and Drug Administration. These trials are a legal means for fledgling for-profit companies to perform research on otherwise illegal drugs.

Our investment analysts have been researching the money-making opportunities in magic mushrooms. In fact, they’ve uncovered one innovative company that’s positioned to dominate this emerging industry. You should act now, because early investors face a big payday. Click here for our special report.

Questions about profitable opportunities in psychedelics? You can reach me at: mailbag@investingdaily.com