Are You Ready for the Financial Crisis of 2020?

Back in 2008, global capitalism came within a whisker of collapsing. That year, the S&P 500 fell about 40%. I had a child in college and a home mortgage. I managed to stay employed, but millions of my fellow Americans weren’t so fortunate.

Observing the news lately, I’m getting flashbacks to that traumatic time. Despite terrible economic fundamentals caused by a deadly pandemic, we’re in the midst of an asset bubble. At the same time, Washington is aggressively deregulating the financial system, perhaps laying the groundwork for another 2008-type catastrophe.

You might wake up one morning, as I did 12 years ago, to find that a blue-chip institution like Lehman Brothers has failed. Below, I’ll steer you toward ways to make money with downside protection.

It’s clear that federal officials are pulling out all the stops to keep the stock market afloat. Latest case in point: stocks were sinking Thursday, due to soaring coronavirus cases in the U.S., when reports about banking deregulation cheered investors and stocks reversed direction late in the session. The Dow Jones Industrial Average rose 1.18%, the S&P 500 rose 1.10%, and the NASDAQ composite climbed 1.09%. In pre-market futures trading Friday, stocks were set to take a breather and open lower.

News emerged Thursday that the Federal Deposit Insurance Commission (FDIC) and Office of the Controller of the Currency intend to loosen restrictions imposed by the so-called Volcker Rule, making it easier for banks to plow big investments into venture capital and similar funds. The change also would allow banks to avoid setting aside cash for derivatives trades between different affiliates of the same firm.

The announced rollback of the post-crisis crackdown on banks focuses on “proprietary trading,” a transaction initiated by a financial firm for direct gain instead of investing for the benefit of clients. These reforms were named after then-Federal Reserve Chairman Paul Volcker. Implemented as part of the Dodd-Frank Wall Street Reform and Protection Act of 2010, the Volcker Rule restricts banks from proprietary trading and from investing their own money in hedge funds and private equity funds.

Wall Street is getting the deregulation it craves, but we might all come to regret it. No one likes onerous red tape. However, without sufficient policing of complex technical processes, the average retail investor is left to the mercy of market insiders who make highly speculative bets.

The stripping away of financial safeguards is occurring during the worst economic downturn since the Great Depression.

In the words of legendary investor Jesse Livermore, who lost his massive fortune during the 1929 stock market crash: “There is nothing new in Wall Street. There can’t be because speculation is as old as the hills. Whatever happens in the stock market today has happened before and will happen again.”

Remember collateralized debt obligations, aka CDOs? They were the villains of the financial crisis of 2008 and helped trigger the global meltdown. Well, they’re coming back into vogue. The re-emergence of highly risky CDOs doesn’t seem to bother anyone in government, but it should.

The Federal Reserve and other government entities have been systematically dismantling the reforms and buffers that were put in place to prevent another 2008 meltdown. It’s not just the Volcker Rule. A slew of other regulations and capital requirements have been loosened.

A debt crisis could be the pin that bursts the stock market bubble. The coronavirus-induced recession is putting new strains on already indebted companies. Diminished demand and supply chain turmoil are creating a cash flow crunch for many businesses, making it difficult for them to service their debt burdens.

This dynamic especially hurts smaller companies in the hard-hit travel and lodging industries. Banks could face a wave of creditor defaults, possibly triggering a domino effect similar to the 2008 meltdown.

According to the Organisation for Economic Co-operation and Development (OECD), between 2008 and 2019, the average global issuance annually was $1.8 trillion, which is double the average annual amount of $879 billion between 2000 and 2007 (see chart). 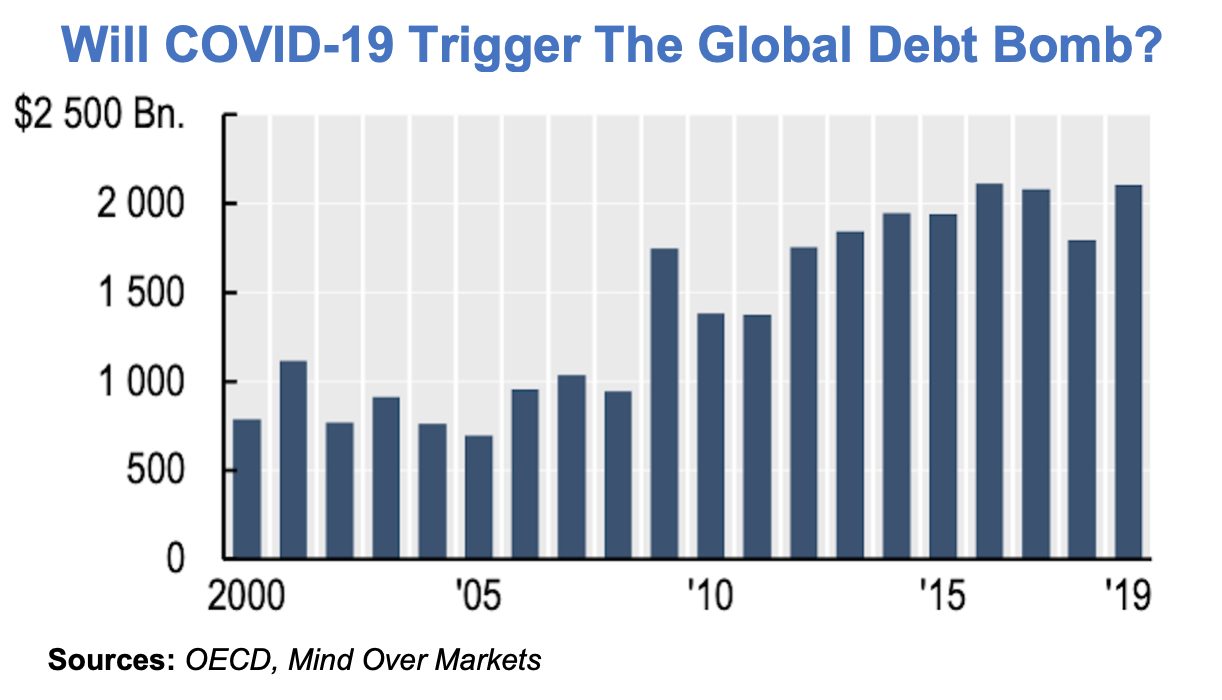 During the era of ultra-low interest rates that followed the Great Recession, corporations loaded up on debt. But instead of using that money to invest in organic growth, most of these borrowers launched share buyback programs or funded mergers.

Financial contagion could easily spread at any time, sparked by a host of factors ranging from coronavirus to trade war to poor economic data, pulling down overpriced but fundamentally weak stocks that are living on borrowed time.

Several states set single-day coronavirus case records this past week, including Arizona, California, Nevada, Texas and Oklahoma. Anyone who’s still betting on a V-shaped economic recovery is living in fantasy land. Another market sell-off this year is likely.

The Great Recession of 2007-2009 erased nearly 57% of the value of the S&P 500, before the market bottomed out in March 2009. Are you prepared for another crisis? My latest video provides time-proven defensive measures.

To make money with less risk, you should also consider the trading strategies of my colleague, Jim Fink. A renowned options trader, Jim Fink is the chief investment strategist of Velocity Trader, Options for Income, and Jim Fink’s Inner Circle.

Jim has developed a proprietary options trading method that consistently beats Wall Street at its own game, in markets that are going up, down or sideways. Even better, his scientific system turns around these profitable trades in 60 days or less.