One Nation, Under Weed: A Legal Update

The stereotype of a lazy, out-of-shape stoner munching out on the couch in front of the television has been thoroughly debunked by a new academic study. Cheech & Chong stereotypes die hard but they are indeed falling by the wayside, as cannabis increasingly becomes a respectable mainstream business.

Below, I examine the latest legal and regulatory news affecting the marijuana sector and its investors, but first let’s take a quick look at this eye-opening study about marijuana users and physical fitness.

A new study released on July 1 of older Americans (over age 60) found that cannabis consumers tended to perform more formal exercise and undertake more physical activities than non-consumers during the course of a four-month trial.

The study, conducted by the University of Colorado at Boulder, asserts:

“Compared to older adult nonusers, older adult cannabis users had lower [body mass index] at the beginning of an exercise intervention study, engaged in more weekly exercise days during the intervention, and were engaging in more exercise-related activities at the conclusion of the intervention.” See the following chart: 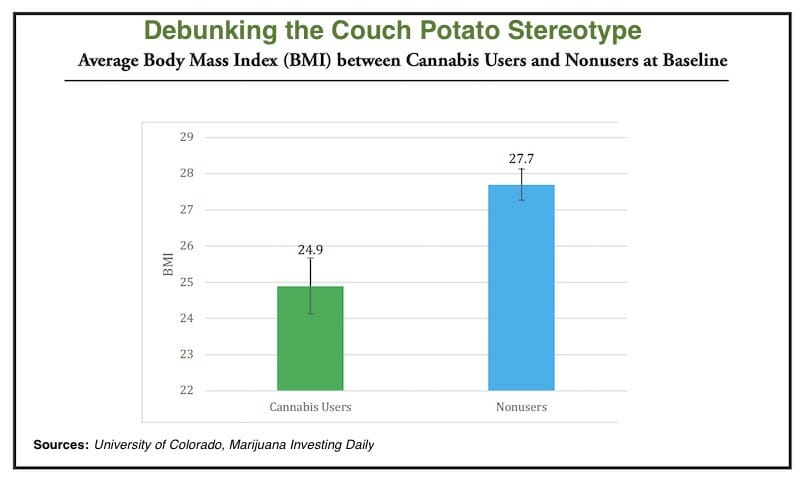 The study found that adults over 60 who used marijuana are generally in better shape than their peers who abstained from cannabis. They also were more responsive to a regimen of physical activity prescribed by a clinician. The study’s authors explain:

“These findings suggest that it may be easier for older adults who endorse using cannabis to increase and maintain their exercise behavior, potentially because cannabis users have lower body weight than their non-using peers. At minimum, the evidence suggests that cannabis use does not hinder older adults’ ability to engage in physical activity, to participate in a supervised exercise program, or to increase their fitness as a result of physical activity.”

Read This Story: From Hype to Maturity: Mary Jane Grows Up

Entrenched cultural biases against marijuana are increasingly challenged by empirical evidence. A separate study, released this month in the Journal of Drug Issues, found that greater marijuana availability does not fuel crime. The study states:

This finding suggests that recreational marijuana legalization in a state such as Colorado doesn’t bring an uptick crime in adjacent states, which contradicts claims made by anti-marijuana public officials.

Let’s look at other marijuana-related activity at the federal and state levels.

The U.S. Forest Service is hiring hazmat specialists to train agents on how to safely destroy cannabis from illegal cultivation sites after several Forest Service employees were “getting sick” and “requiring trips to emergency rooms with possible long term health effects” due to “unique hazardous chemicals” used by unregulated growers.

The policy director for former Vice President Joe Biden’s presidential campaign said that “as science ends up with more conclusive evidence regarding the impact of marijuana, I think he would look at that data. But he’s being asked to make a decision right now. This is where the science guides him.”

The House Armed Services Committee approved report language directing the Department of Defense to compile data on the reasons people are being denied security clearances, including for marijuana and other drugs.

Tennessee Democratic congressional candidate Christopher Hale tweeted: “Why is that kids and veterans who smoke marijuana have criminal records, but Wall Street executives who committed massive fraud and wrecked our economy do not? I’ll be the most pro-weed Congressman God ever made. I’m asking for your support.”

Florida regulators are considering allowing medical cannabis recommendations to be made through telemedicine on a permanent basis.

Illinois regulators adopted a rule clarifying that marijuana-infused foods must be taxed at the 6.25% general merchandise rate instead of the 1% rate that applies to most groceries.

North Dakota marijuana activists working on a proposed legalization ballot measure for 2022 say they already have about half of required signatures.

Oklahoma regulators agreed to temporarily not enforce rules that could force some medical cannabis businesses to close down while a judge considers a lawsuit challenging them.

Pennsylvania’s lieutenant governor is recommending marijuana legalization as a fiscal stimulus for the state. The state’s lieutenant governor also posted this tweet: “Know this: marijuana is classified as a Schedule I drug federally. Veterans w PTSD cannot be prescribed cannabis by the VA. On my 67 County tour, we heard from veteran after veteran: the country I defended considers me a criminal using the 1 thing that makes me feel normal.”

Editor’s Note: As the above article makes clear, the legalization of marijuana is a social, political and financial revolution that’s making early investors rich. But in the fickle marijuana sector, careful stock selection is all the more important.