For the past several weeks, the optimists were assuring us that the beleaguered U.S. economy was poised to take off like “a rocket ship.” That seemed to be their favorite bullish metaphor.

Houston, we have a problem…

The U.S. Commerce Department reported Thursday that gross domestic product (GDP) plunged by a shocking 32.9% in the second quarter on an annualized basis, the worst quarterly decline ever (see chart). 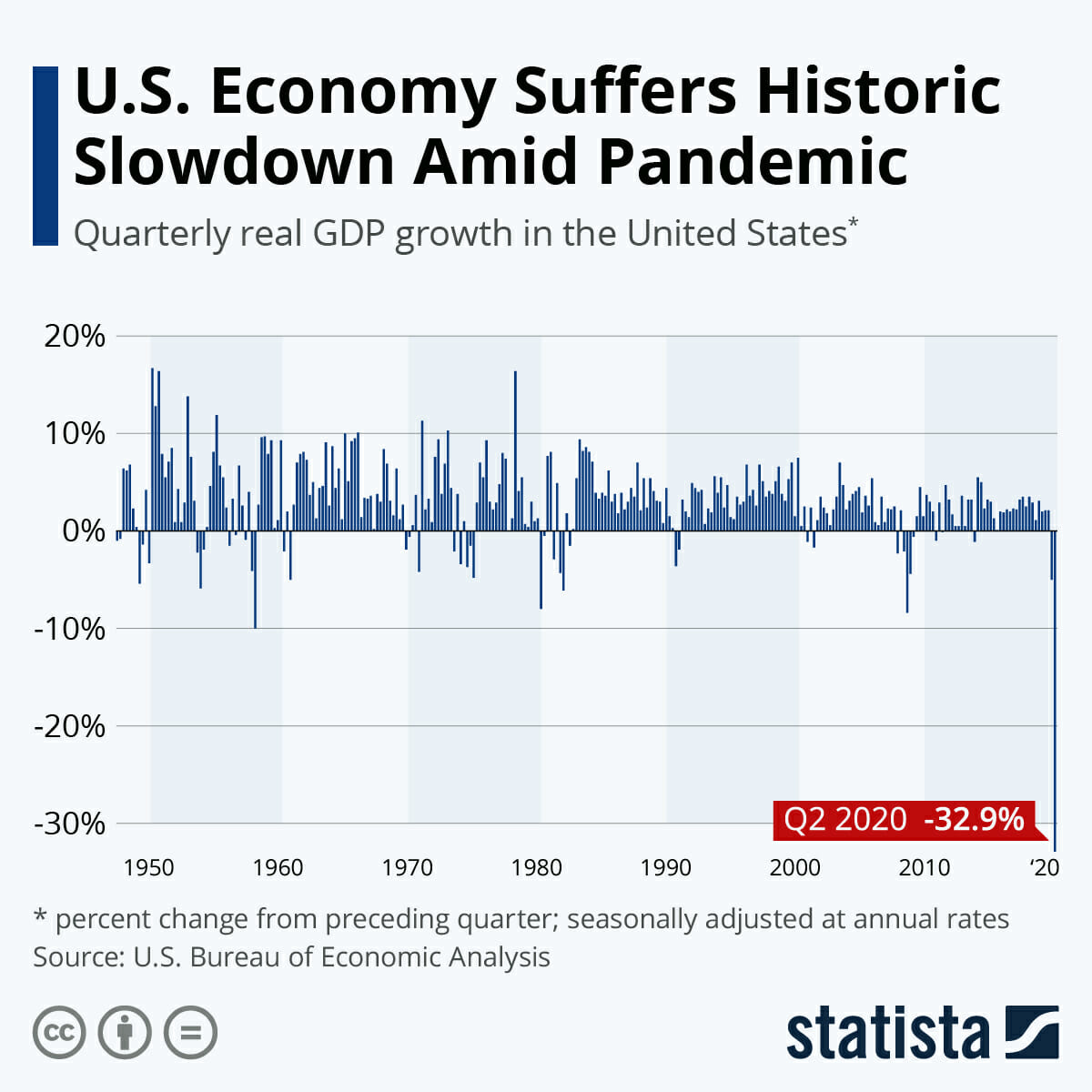 Over the past 200 years, the U.S. has never witnessed an economic decline of this speed and magnitude. Neither the Great Depression nor the Great Recession saw this sort of contraction.

For context, the worst quarter during the financial crisis of 2008 was the 8.4% GDP drop in the fourth quarter of that year. In 1932, at the nadir of the depression, the economy shrank that year by 14% (the government didn’t start keeping quarterly GDP records until 1947).

Official pronouncements this year about the economy and the pandemic have been consistently wrong. Back in February, high-level policymakers were insisting that the coronavirus was contained and the economy was holding up nicely. Um, no.

Pandemic-induced business closures and quarantines will remain with us into the foreseeable future. America now faces the worst of both worlds: a surging coronavirus pandemic and a collapsing economy.

Here’s the good news: You should not exit the stock market. In fact, later in this article, I’ll pinpoint a way for you to not only stay invested but also reap outsized gains. Despite this unprecedented crisis, our savvy investing team can steer you toward money-making opportunities.

But first, let’s take an unvarnished look at reality.

The Labor Department reported Thursday that the number of Americans applying for jobless benefits rose for the second consecutive week. Initial jobless claims rose by 12,000 to 1.434 million in the week ended July 25. The advance seasonally adjusted insured unemployment rate was 11.6% for the week ending July 18, an increase of 0.5 percentage point from the previous week’s unrevised rate.

What is Congress doing about all of this? Nothing.

Lawmakers in Washington are deadlocked on a second coronavirus relief package. Extended unemployment benefits expire on July 31. The federal moratorium on evictions expired last Friday, ending protections for nearly 12 million Americans. A tsunami of evictions looms over the country, as rent payments become due this weekend.

However, the NASDAQ composite gained 44.87 points (+0.43%), as analysts expected Big Tech to report better-than-feared operating results after the bell. They weren’t disappointed.

Apple (NSDQ: AAPL), Alphabet (NSDQ: GOOGL), Amazon (NSDQ: AMZN), and Facebook (NSDQ: FB) all surprised on the upside yesterday after the market closed, reflecting greater demand for their products and services during the pandemic. The resiliency of mega-cap technology firms is one of the pandemic’s few bright spots.

In early trading Friday morning, stocks were mixed. The Dow and S&P 500 were firmly in the red in volatile trading, but the NASDAQ was still riding in the green in the wake of the tech sector’s robust earnings performance.

Problem is, the Fed’s intervention on a massive scale leads to equity market distortions with stocks decoupled from fundamentals. It’s hard to fathom how stocks can stay aloft when the economy is cratering, unemployment is soaring, and corporate earnings are posting double-digit negative growth. Silicon Valley’s prosperity isn’t sufficient to sustain the entire nation.

These numbers are horrific but don’t panic. When the pandemic is inevitably contained, stock market risks will recede and our institutions will stand intact.

Until then, stick to your long-term retirement plan. Don’t dump inherently sound stocks, but don’t harbor unrealistic hopes, either. During these emotionally charged times, ignore the bleating of the partisan hacks.

Chances are, you’re saving for retirement or for another long-range goal. With that in mind, keep your eye on the long game. Don’t react to the dire headlines by throwing your investment strategy out the window. Tune out the lies, false promises, and wishful thinking. Rely on the facts.

One fact-based expert you can always rely on is my colleague, Jim Fink.

Jim Fink is the chief investment strategist of our premium trading service Velocity Trader. Jim has developed a scientific way to quickly and predictably multiply the gains of regular stocks.

Jim’s technique works in up or down markets, in economic expansions or recessions…in normal times or during pandemics.

Now, Jim is making this pledge:

Jim Fink is currently setting up his next trades. Want to get in on the action? There’s no time to lose. Follow this link for details.

John Persinos is the editorial director of Investing Daily. Send your comments or questions to: mailbag@investingdaily.com