How to Outwit the Wolves of Wall Street

I was 24 years old when I got my first job in publishing, as a reporter at The Lowell Sun, a daily newspaper in Massachusetts. Mentors were few and far between. Whenever I needed help, the attitude of the managing editor was: “Look, kid, just figure it out.” As a journalist, I was raised by wolves.

Which gives me insights into the wolves of Wall Street. Forget the platitudes of the white-haired gurus who try to act like your favorite uncle. The stock market boils down to one heartless equation: a daily wager on the future profitability of corporations.

Lately that wager doesn’t add up. According to FactSet, the blended second-quarter earnings decline (to date) for the S&P 500 is -33.8%. Analysts predict a year-over-year decline in earnings in the third quarter (-22.9%) and the fourth quarter (-12.8%).

And yet, stocks are trading at record highs. The S&P 500 lost a third of its value in the initial phases of the pandemic and then rebounded, rising more than 50% from its March 23 low.

Do the math. Or as my old boss would say, just figure it out.

We’re due for a correction. Below, I’ll show you how to prepare for a market drop and emerge with a portfolio that’s even stronger. First, let’s try to make sense of the contradictory data.

All three major U.S. stock market indices began trading Wednesday morning in the green but then at midday abruptly reversed course after the Federal Reserve released the minutes of its July meeting. In the minutes, Fed policymakers expressed concerns that the pandemic would continue to “weigh heavily” on the economy.

Wall Street expects more favorable conditions 12 to 18 months from now, largely due to massive stimulus from the Federal Reserve. Problem is, a lot can happen between now and the eventual recovery.

Watch This Video: Will The “Dog Days” Bite Investors?

The CAPE ratio is defined as price divided by the average of 10 years of earnings (moving average), adjusted for inflation. The ratio currently stands at 31.06, which is 85.7% higher than the historical mean of 16.73.

According to this long-term chart of the CAPE ratio, the market is more overvalued than it was in 1929 and 1987: 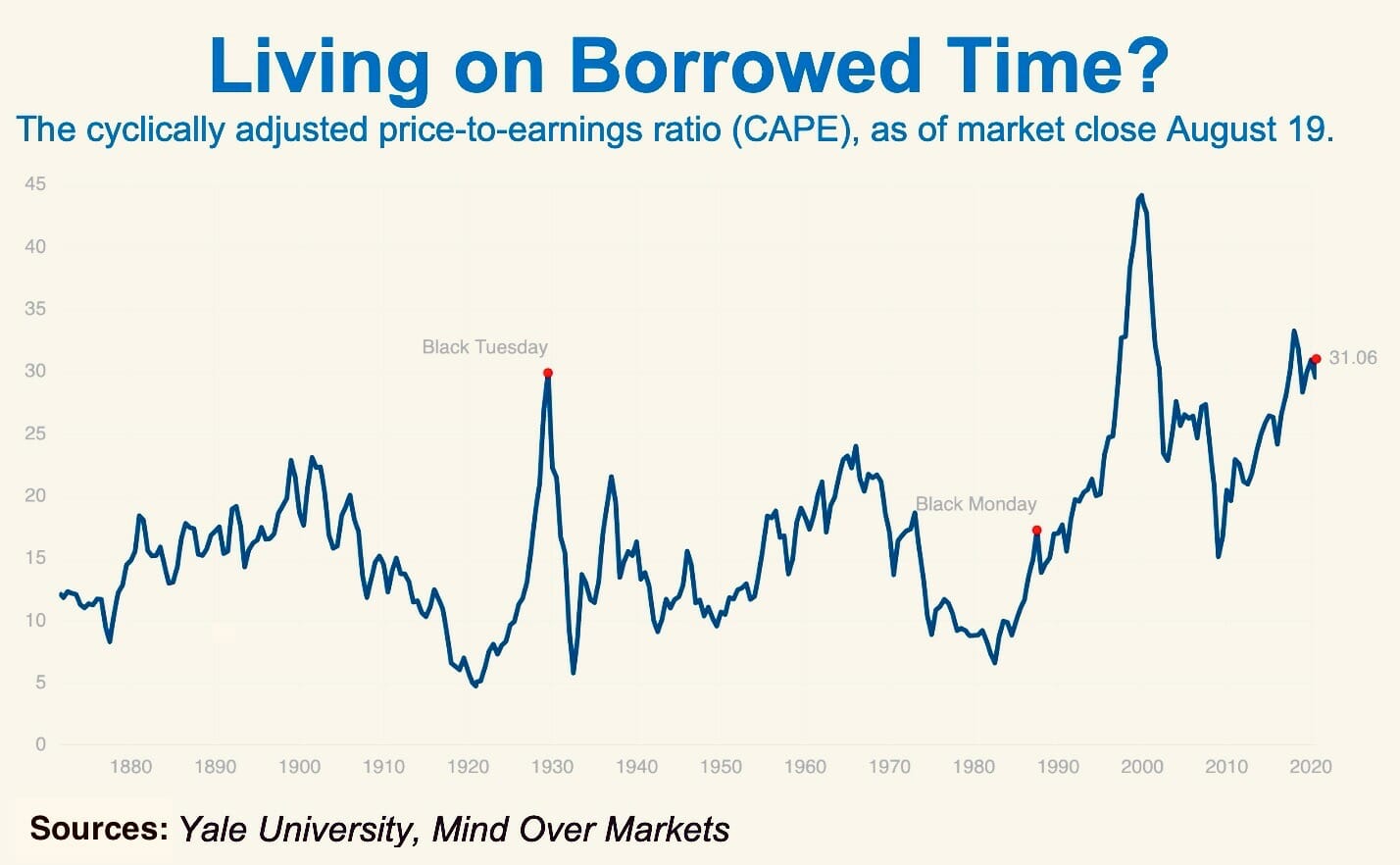 To be sure, investors have been cheered by better-than-expected earnings results from a few sector bellwethers, such as the blockbuster quarterly report on Wednesday from retailer Target (NYSE: TGT).

Target’s total sales grew 24.7% from the year-earlier quarter to nearly $23 billion while earnings per share (EPS) spiked 84.4% to $3.35, crushing consensus estimates for $19.8 billion in revenue and EPS of $1.60. (It begs the question: how could analysts have been so far off the mark? I’ll cover the sometimes dubious nature of earnings estimates in a future Mind Over Markets column.)

As a legacy retail chain with an extensive bricks-and-mortar presence, Target exemplifies how the winning retailers are those that have implemented effective online sales strategies. The following chart shows the growing importance of online sales in the retail landscape: 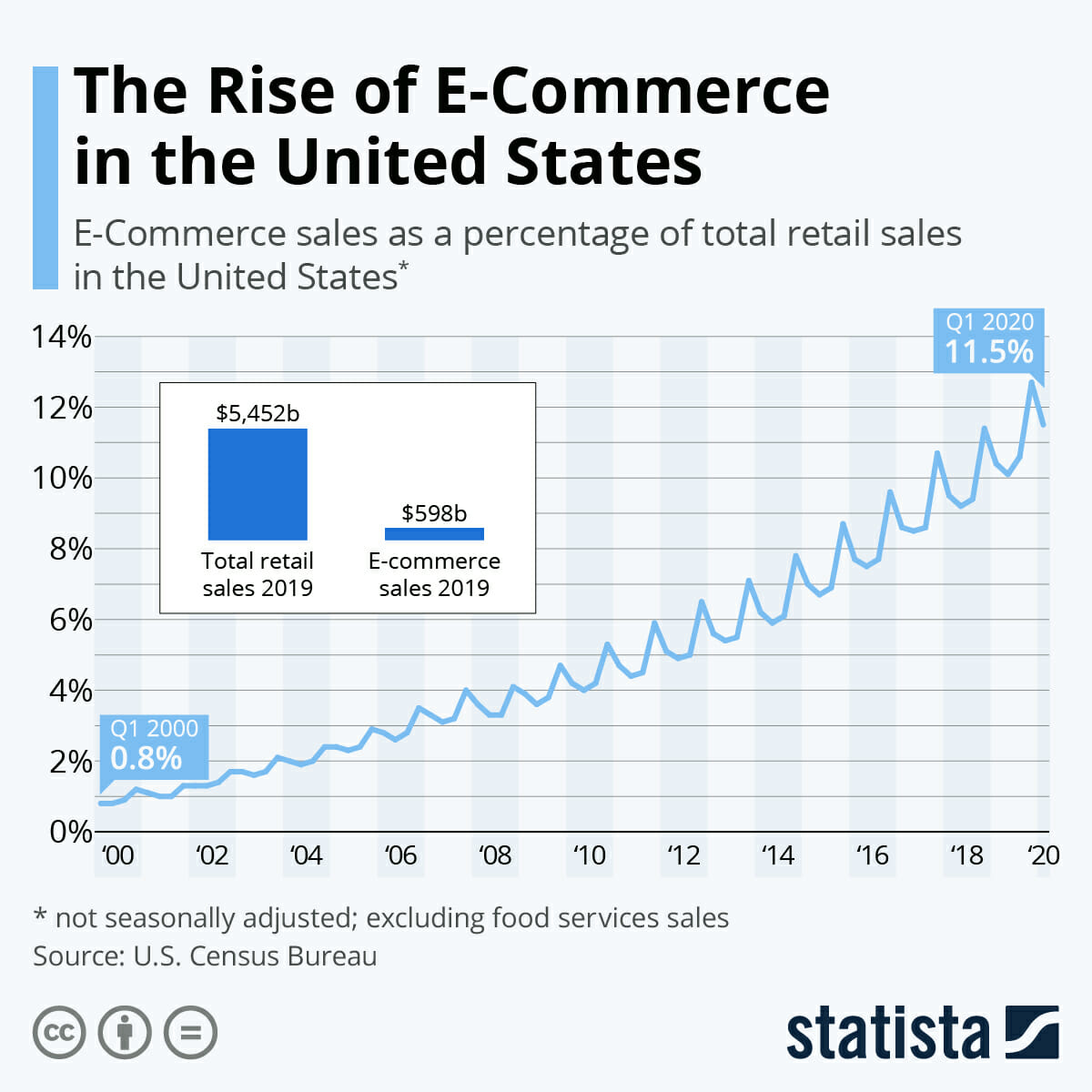 The mass delusion of crowds…

Bright spots such as Target are welcome but investors are clinging to some unrealistic hopes for the market as a whole.

The coronavirus is far from contained. You may be bored with the pandemic, but it’s not bored with you. Indeed, health experts warn that the outbreak could worsen during the winter flu season.

A vaccine is not imminent and even if it were, its benefits would be limited. Many recent announcements about biotech “breakthroughs” regarding a coronavirus treatment smack to me of stock manipulation and insider trading.

Also unlikely is a congressional breakthrough on fiscal stimulus. I’ve covered politics for decades and the current rancor in Washington, DC is the worst I’ve ever seen. Compared to today’s horror show along the Potomac, the Watergate era was Camelot. For the rest of this year, fiscal stimulus is DOA.

The herd mentality on Wall Street is hard to resist and bullish sentiment currently holds sway. But it wouldn’t take much to spoil the party.

Those five tech giants on average have risen about 40% year to date, while the 495 other stocks in the index have collectively lost a few percentage points. Let that disparity sink in. If the handful of market leaders stumble, they’ll drag down the rest of the market.

To be sure, we’re seeing tentative signs of economic recovery. Weekly state unemployment benefit claims have fallen below one million for the first time since March and roughly 1.8 million new jobs were added in July. But the bar is low, when an unemployment rate of 10.6% is considered positive.

These conditions set the stage for a wave of mergers and acquisitions (M&As). Big Tech is flush with cash, as quarantined consumers increasingly rely on mobile and virtual tools. Many tech innovators are small and undervalued companies; now would be an opportune time for their larger brethren to gobble them up.

“Buy when there’s blood in the streets” is an aphorism for investors but it also can be applied to mega-cap companies looking to acquire valuable competitors on the cheap.

My colleague Nathan Slaughter has made it his business to understand M&A activity, on a granular level.

As chief investment strategist of Takeover Trader, Nathan is adept at digging up the inside data on pending takeovers. Along those lines, he recently went on camera to reveal a startling development. If you watch his presentation and follow his advice, you could reap huge market-beating gains.