As the largest of the integrated supermajor oil companies, Exxon Mobil (NYSE: XOM) has long been a popular stock for income investors. However, it has been a really tough decade for Exxon Mobil, and that was especially evident over the past two weeks.

Two weeks ago Exxon Mobil lost its position as the largest U.S. energy company to Florida-based utility NextEra Energy (NYSE: NEE). NextEra, which has long been the #1 ranked stock pick in our Growth Portfolio at Utility Forecaster, has thrived as the world moved to cleaner electricity. Arguably no company has navigated this transition in the U.S. better than NextEra. In the process, it became the largest electric utility in the world.

If you had invested in NextEra Energy a decade ago, your total return through this week, including dividends, would have been 600%. That is a phenomenal return for an energy company.

In contrast, if you had invested in Exxon Mobil a decade ago, you have seen the share value decline by half. Add in the dividends, and the total 10-year return of Exxon Mobil is -25%.

Exxon Mobil’s decline this year, more than anything, is a function of the continuing COVID-19 pandemic. Although the company’s performance in the decade before 2020 was lackluster, the company was still worth just over $300 billion when the year began. Nine months later that value is $140 billion as the company grapples with the decline in energy demand brought on by the pandemic.

What did NextEra do right? NextEra has used the stable cash flows from its regulated Florida power utility (70% of revenue) to help finance its investments in renewables (30% of revenue). In the process, NextEra became the largest producer of wind and solar power in the world.

The combination of the pandemic that crushed Exxon Mobil’s value, and NextEra’s aggressive move into renewable energy that keeps propelling the company to double-digit annual returns, explains how NextEra upended Exxon Mobil.

But Exxon Mobil’s bad news didn’t end there. At times over the past decade, Exxon Mobil was worth as much as $225 billion more than Chevron (NYSE: CVX). For years the biggest of the U.S.-based “Big Oil” companies, Exxon Mobil’s size advantage disappeared on October 8, 2020, when Chevron’s value closed the day higher than Exxon Mobil’s. That knocked Exxon Mobil off a perch it has held for decades.

Chevron has struggled with the COVID-19 pandemic along with other oil and gas producers, but not as much as most others. While Chevron’s value also has declined during the pandemic, Exxon Mobil’s has declined a lot more. 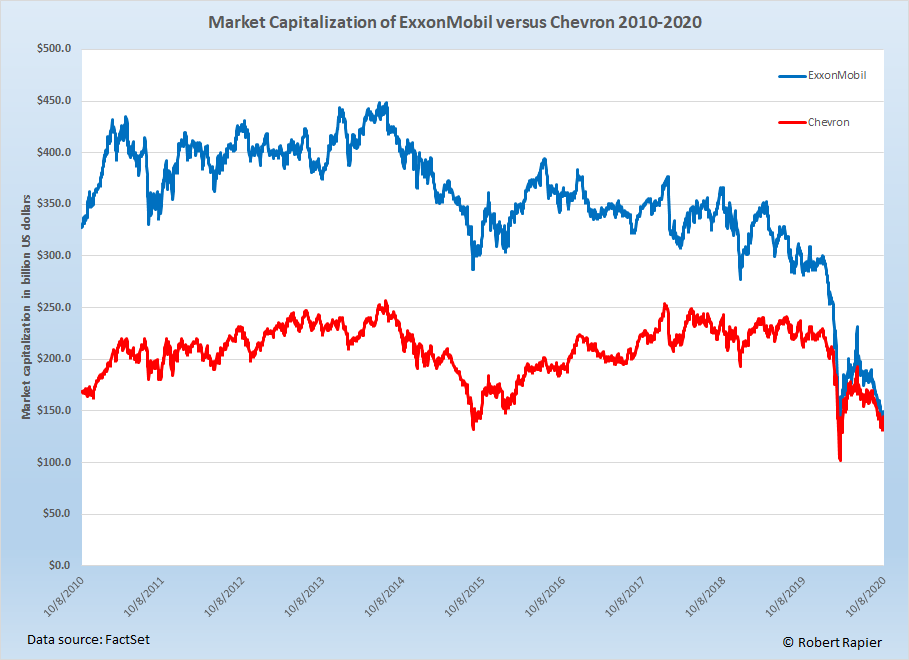 The change at the 30-stock Dow index is designed to eliminate overlap, maintain a balance of sectors, and add companies that better reflect the nature of the U.S. economy. The Dow’s decision represented a humbling fall from grace for Exxon Mobil.

Where did things go so wrong for Exxon Mobil? I have often pointed to the company’s ill-timed $36 billion acquisition of natural gas producer XTO Energy in December 2009 as a factor. Natural gas prices subsequently collapsed, and the price the company paid ended up being too high. Exxon Mobil also had expensive missteps in Russia and in Canada’s oil sands.

Chevron, on the other hand, hasn’t made the same kind of high-profile missteps. When a bidding war broke out for Anadarko, Chevron wisely walked away and collected a $1 billion breakup fee. Meanwhile, Chevron managed to acquire Noble Energy for what seems to be a bargain.

Exxon Mobil did have a bounce on Friday, so it managed to close the week back on top of Chevron. The valuations of NextEra and Exxon Mobil bounced back and forth during the week, but NextEra had climbed back on top by the end of the week.

I should point out that many consider enterprise value (EV), which includes the value of a company’s debt among other things, to be a better indicator of a company’s market value. The EV represents the total cost it would require to acquire the company. By that measure, Exxon Mobil at $229 billion is still comfortably ahead of both Chevron ($140 billion) and NextEra ($193 billion).

Exxon Mobil’s woes are a reflection of a world that is changing. What worked in the past may not work in the future. Companies, like investors, must adapt or suffer the consequences.

No one understands economic “disruption” better than my colleague Jim Pearce, chief investment strategist of our flagship publication, Personal Finance. Jim has devised a way to make money from the mayhem all around us.

We’re witnessing the rise of indebted companies that are being kept alive by the Federal Reserve’s aggressive monetary policies. These vulnerable companies are ripe for a tumble.

A veteran trader with decades of profitable trades under his belt, Jim is ready to reveal his personal secrets for turning these “zombie companies” into your most profitable trades ever. To learn the details, sign up for Jim’s online presentation by clicking here.