Marijuana stocks have been rising across the board in recent days, on investor expectations that the November 3 elections will usher in a Democratic sweep. Ahead in national and state polls this electoral season, Democrats tend to be more marijuana-friendly than Republicans. But here’s the good news: marijuana legalization will continue apace, regardless of which political party is in power.

On November 3, a “green wave” of marijuana initiatives will propel the industry forward. Whether Donald Trump or Joe Biden wins next Tuesday, several pro-marijuana ballot measures around the country are likely to pass. In turn, these new laws will open markets and boost pot stocks.

Read This Story: The Epic Cannabis Election of 2020

Below is a roundup of the latest political, legal, and regulatory developments affecting the marijuana industry, as the November 3 general election looms closer.

The chairman of the New Jersey Senate Judiciary Committee said Tuesday that recreational marijuana sales could start only a few weeks after voter approval of a legalization referendum on November 3. Sales would be possible through existing medical cannabis dispensaries.

New Jersey Public Question 1, the Marijuana Legalization Amendment, is on the ballot in New Jersey as a legislatively referred constitutional amendment. 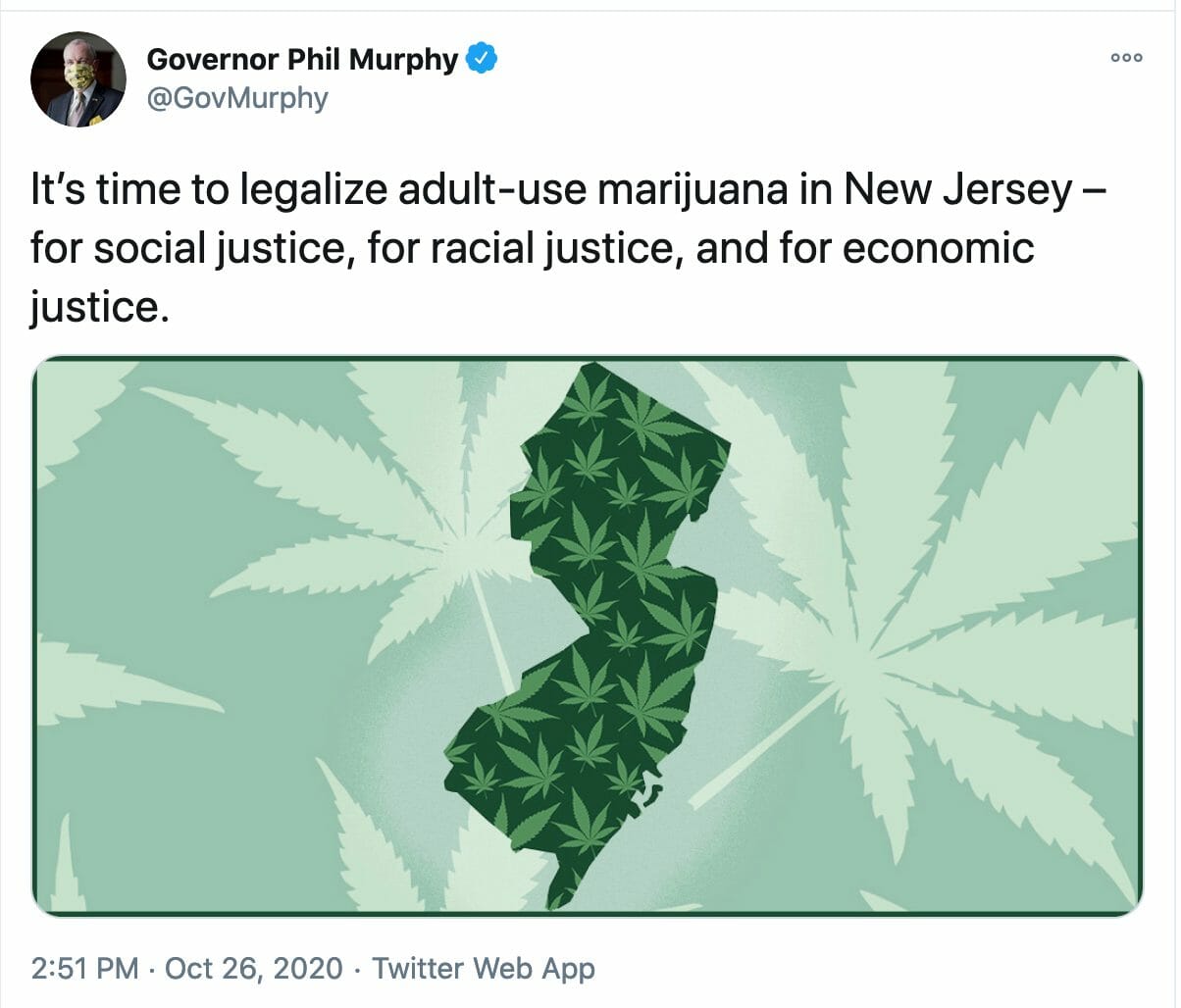 Read This Story: Pot and Politics: A Blunt Guide 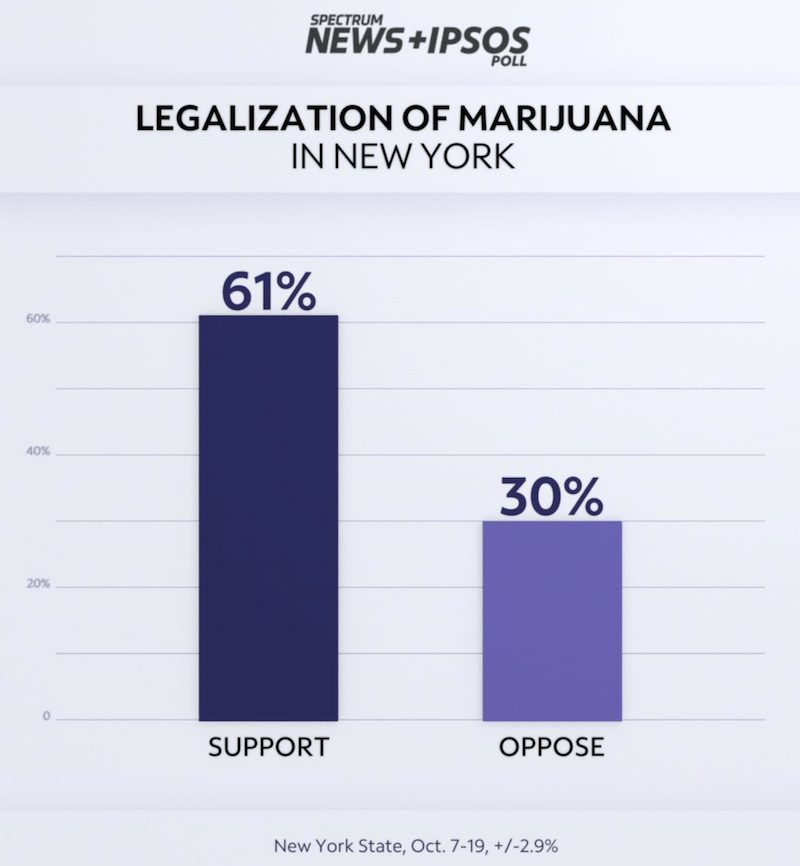 The survey conducted by Spectrum News and Ipsos involved interviews with 1,451 adults from October 7-19. The survey was released October 16, days after Gov. Andrew Cuomo (D) said that he expects the Empire State to legalize marijuana “soon.” Cuomo said tax revenue generated from cannabis sales would assist economic recovery efforts during the COVID-19 outbreak.

Earlier this month, a New York State senator introduced a bill to create a public bank that could accept funds from marijuana businesses. Lack of access to banking is a chronic problem for marijuana companies, causing a cash flow crunch for many fledgling firms.

Banks are hesitant to lend to marijuana companies, because pot remains illegal at the federal level. Bankers are worried about unforeseen liabilities. Lenders are by nature conservative and they fear a potential legal backlash against pot. Accordingly, several measures are pending in Congress and state legislatures to expedite banking for marijuana businesses.

The House of Representatives in late September advanced a bill that would protect banks that service the cannabis industry from being penalized by federal regulators. Called the Secure And Fair Enforcement (SAFE) Banking Act, the legislation seeks to encourage the provision of financial services to cannabis companies by removing the fear of potential federal action against lenders. SAFE now sits in the Senate.

A wide variety of initiatives on state ballots November 3 would legalize medical marijuana. According to a report released October 19 by marijuana research firm New Frontier Data:

“Nationally, the total number of patients treating ailments with legal medical cannabis has surpassed 3 million, a number projected to increase as newly legal medical markets become operational. An estimated 44.5 million American adults will consume cannabis at least once in 2020 across both legal and unregulated markets. That total is projected to grow by roughly 4% per year over the next six years, reaching an estimated 52.3 million consumers by 2025.” 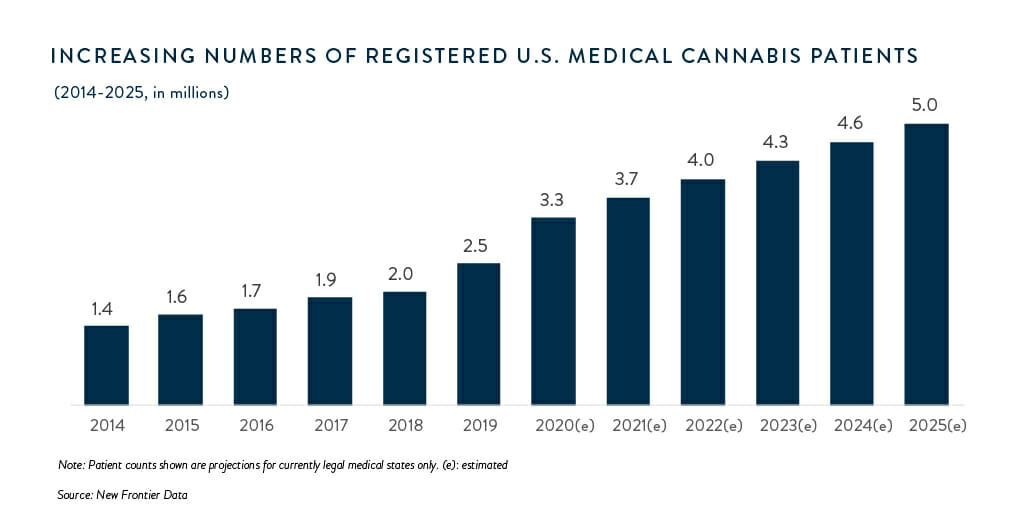 Medical evidence increasingly shows the efficacy of cannabis-based treatments for chronic illnesses. A fast-growing customer base for medical marijuana is the elderly. Doctors around the country are reporting an increase in marijuana use by seniors in their geriatric practices.

As the above voter initiatives show, the commercialization of marijuana enjoys powerful momentum. New laws that lift pot restrictions result in new customers for the purveyors of weed.

After painstaking research, we’ve pinpointed cannabis investments with the greatest profit potential. Click here for our report on the best pot stocks.