During times of tribulation, my Greek grandmother usually invoked this village wisdom: “The dogs may bark, but the caravan moves on.” If my Yia Yia were still alive today, she’d probably apply those words to the current political situation in America.

Spooked by all the post-election barking? Just move on. Regardless of your political affiliation, you can take this statement to the bank: Joseph R. Biden will be sworn in as the 46th president of the United States on January 20, 2021. That date is set by the 20th Amendment to the U.S. Constitution, meaning it’s enshrined in law.

Typically in the past, the loser of the presidential race would give a gracious concession speech and accept the results. But the law does not require a concession; that’s merely social custom. Biden has clinched insurmountable leads in the Electoral College and popular vote. Efforts to overturn the results based on charges of “fraud” are doomed to fail.

Investors should make decisions based on reality, not their wishes or fears. A Biden administration taking power in 2021 is a reality and as an investor, you should position your portfolio accordingly. Below, I highlight four investment themes that are poised to surge in early 2021 and beyond.

Political stability, economic growth, and positive earnings performance await in 2021. With loose monetary policy in place and new fiscal stimulus on the horizon, it pays to be bullish right now. Take a proactive stance, ahead of the investment herd. Of course, the wild card is the coronavirus pandemic, but the emergence of a possible vaccine and the imminent implementation of new public health policies are game-changers.

U.S. stocks were mixed in pre-market futures trading this morning, after reports Wednesday that Pfizer (NYSE: PFE) CEO Albert Bourla filed to sell millions of dollars of his company’s stock Monday, the exact day the pharmaceutical giant announced positive data about its COVID-19 vaccine. The news raised unanswered questions about the vaccine, which nonetheless has proven highly effective in trials.

An even bigger issue is the 2020 election, which has loomed large in the minds of corporate managers.

The research firm FactSet searched for the term “election” in the conference call transcripts of the 212 S&P 500 companies that conducted third quarter earnings conference calls from September 15 through October 28. The term was mentioned during the calls of 73 companies, or about 34%.

FactSet also searched for the term “election” in the transcripts of the 284 S&P 500 companies that had conducted Q3 earnings calls from September 15, 2016 through October 28, 2016. The term was mentioned during the calls of 56 companies, or about 20%. 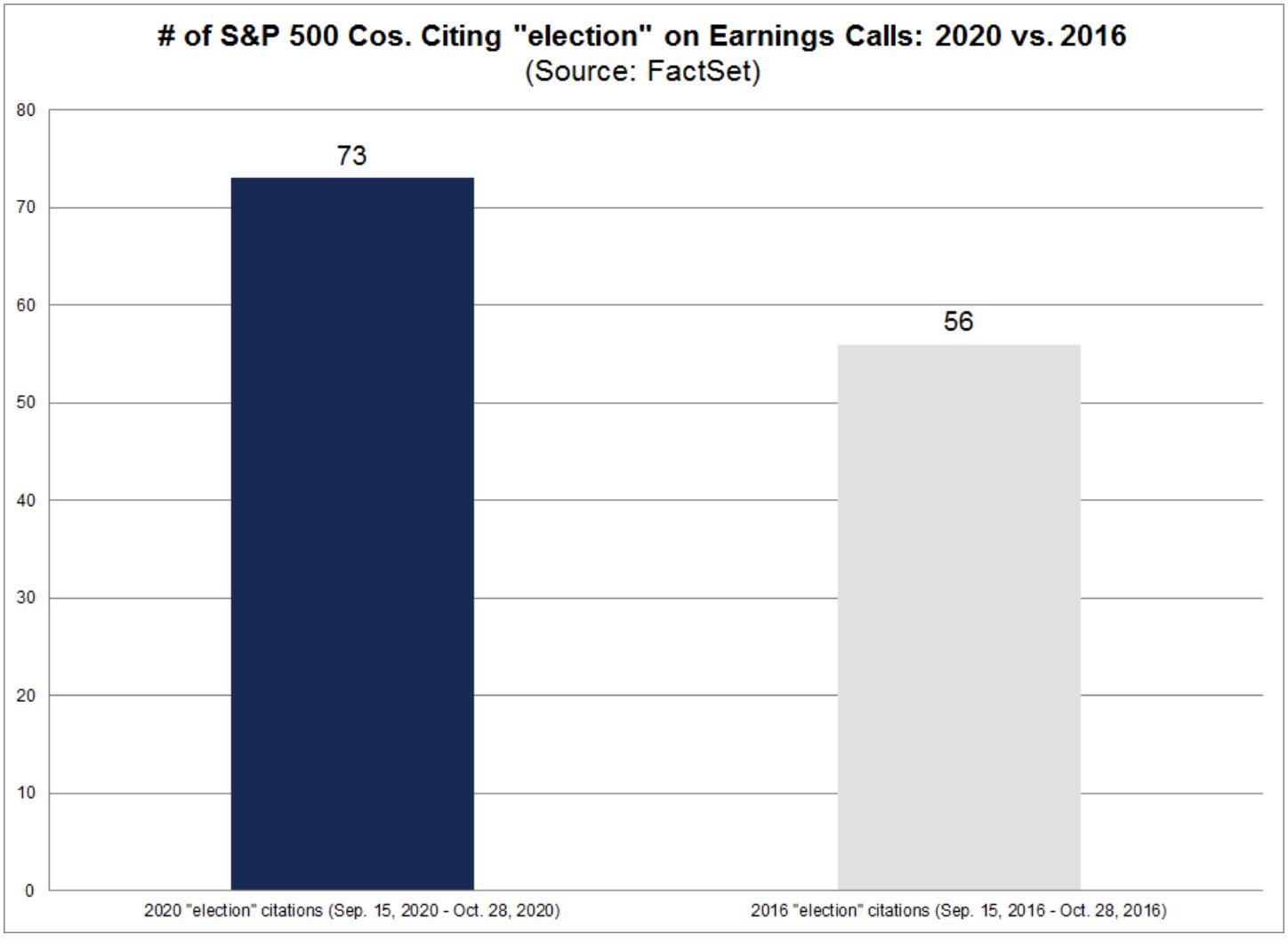 Judging by the stock market’s powerful post-election rally, it would appear that corporate and financial leaders are content with Joe Biden’s win. But this sentiment has more to do with the end of uncertainty than with any eagerness to see Democrats in the White House.

So where should you put your money under a Biden administration? Among the sectors that I particularly like for 2021:

The market is an economic barometer, not a political one, and stocks move according to fundamentals. Don’t make investment decisions based on your party affiliation or electoral preferences. You should develop a strategy that’s designed to last beyond a single election cycle. Focus on improving bottom lines, not alarmist headlines.

If you’re looking for a reliable source of income that’s immune to the pandemic and economic ups and downs, turn to my colleague Amber Hestla.

Amber can show you how any U.S. citizen can pocket instant cash from a government “income insurance” program. It’s all thanks to an obscure loophole she has unearthed through months of research. Intrigued? Click here for details.