Moving markets up or down in recent days is the progress (or lack thereof) in fiscal stimulus negotiations. Federal government spending can exert enormous influence on the financial markets, which brings me to Uncle Sam’s biggest cash cow of all: military spending.

American defense companies have powerful friends on key committees in both chambers of Congress, in both parties. President Eisenhower coined the term “military-industrial complex” during his farewell address in 1960 and it was one of the most trenchant observations that Ike ever made. This political reality will remain unassailable under a Biden presidency. Below, I’ll show you a tech-focused way to profit from defense.

The wild card for the markets right now is what happens with fiscal stimulus. But the ultimate stimulus remains military spending. The annual U.S. defense budget grew by about 10% under Donald Trump and the Pentagon’s latest budget request came in at $705 billion for fiscal 2021. President-elect Joe Biden has stated that he doesn’t plan to cut the overall defense budget and for certain high-tech military initiatives he pledges to boost spending.

Last year, sales by the world’s 25 biggest arms companies were 8.5% higher than in 2018, totaling $361 billion, according to a report released on December 7 by the Stockholm International Peace Research Institute (SIPRI). The 12 U.S.-based aerospace/defense contractors in the top 25 accounted for 61% of that total (see chart, released Tuesday by Statista): 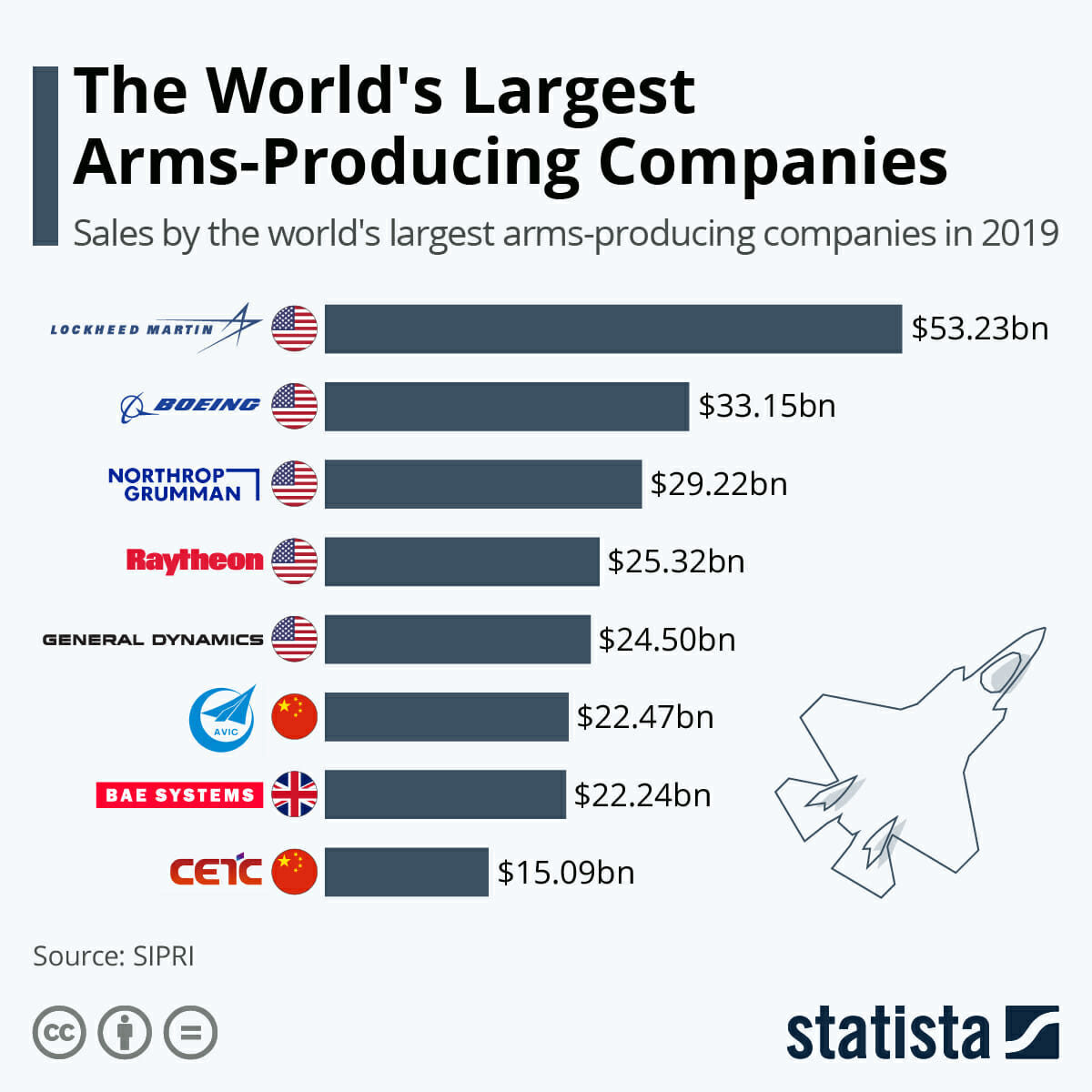 Geopolitical risks are likely to increase next year, as Russia, China, North Korea and other antagonists of America test the resolve of the fledgling Biden administration.

It’s a myth that Democratic presidents under-fund the military. Defense spending is one of the few items that enjoys bipartisan support on Capitol Hill; you can expect Pentagon funding to continue rising under a Biden presidency.

Quick disclaimer: It’s not my job to comment as to whether this enormous defense spending is efficient, effective or even moral. Such judgments fall outside the purview of this newsletter. As investors, we must take the world as it is, not as we want it to be. Some investors refuse to put money into “sin sectors” such as tobacco, gambling, alcohol, firearms, or marijuana. So let your conscience be your guide.

But if you’re a dispassionate investor who seeks market-beating gains over the long haul, consider aerospace/defense. In addition to growth, the sector also provides a portfolio hedge, because it tends to be resistant to inflation and economic cycles.

Joe Biden voted to approve of the Iraq War when he served in the Senate; his son Beau Biden fought in that war. The president-elect has vowed to steer defense spending toward innovative technologies to stave off advancements made by foreign adversaries such as China.

A technological innovation with huge implications for national security is the global implementation of 5G, the “fifth generation” of wireless technology that’s designed to supplant 4G.

Super-fast 5G will provide the backbone for the Internet of Things. 5G also is destined to play a pivotal role in what’s known as C4ISR, an acronym used by the U.S. Department of Defense, U.S. intelligence agencies, and the defense community that stands for Command, Control, Communications, Computers, Intelligence, Surveillance, and Reconnaissance.

5G mobile networking capabilities will transform C4ISR and how wars are fought. The country that dominates 5G will obtain an edge in military competitiveness. The Chinese government is subsidizing 5G development. The U.S. government has been leaving 5G to the private sector, but that is about to change under the new presidential administration. The 5G arms race is on. At stake is nothing less than global military dominance.

The opportunities for investors in 5G wireless networks are enormous. That’s why our team of strategists recently put together a special report on 5G investment plays. Click here for details.

John Persinos is the editorial director of Investing Daily. He also serves as an analyst with the aerospace/defense consulting firm the Teal Group. You can reach John at: mailbag@investingdaily.com. To subscribe to his video channel, follow this link.