Federal Pot Laws: The Times They Are a-Changin’

Many of us start out as rebels and end up as capitalists. I personally went through that evolution.

I’m in good company. Case in point: On December 7, the Universal Music Publishing Group announced that it had signed a blockbuster deal to purchase Bob Dylan’s entire songwriting catalog. The price was not disclosed but the deal is estimated to be worth more than $300 million.

Bob Dylan’s 1964 protest song The Times They Are a-Changin’ was about social revolution. Today, it could easily apply to marijuana laws.

Ever since the Democrats took control of the House of Representatives in November 2018, the move for full legalization of marijuana at the federal level has gathered steam. The Democrats are a marijuana-friendly party. Even many Republicans are joining the chorus for marijuana legalization.

The time to get aboard the pot sector is now. Below, I’ll steer you toward an outstanding investment opportunity in cannabis. But first, let’s take a look at the latest marijuana-related actions in Congress.

This week, the U.S. House of Representatives passed a bill to expand marijuana research. The bill would compel the Drug Enforcement Administration to register more growers and allow scientists to study cannabis that consumers buy from state-legal dispensaries. The bill enjoys bipartisan support and faces good prospects of passage in the Senate, if not this year then in early 2021.

The House action on marijuana research came only days after the chamber passed separate legislation called the Marijuana Opportunity, Reinvestment and Expungement (MORE) Act. The landmark MORE legislation would remove cannabis from the federal Controlled Substances Act, expunge past marijuana-related convictions and require certain criminal cases to be resentenced.

A new poll shows that 66% of U.S. voters, including a majority of Republicans, support the House’s passage last week of MORE (see chart). 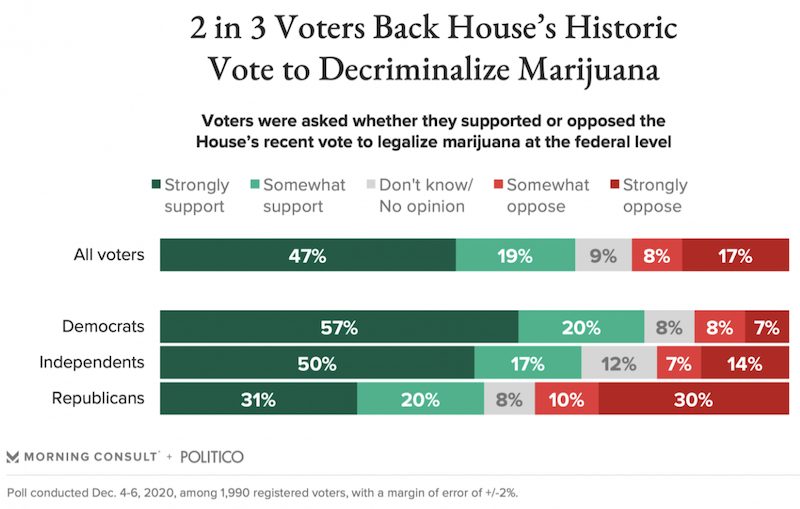 California Attorney General Xavier Becerra, selected by Biden to serve as Health and Human Services secretary, supports legalizing marijuana. As a U.S. representative, Becerra voted in Congress to protect state laws from federal intervention. If confirmed by the Senate, he would play a pivotal role in cannabis rescheduling decisions.

MORE passed with overwhelming support and lawmakers have taken to social media to praise the bill.

Rep. Ayanna Pressley (D-MA) tweeted: “Legalizing cannabis is a racial & economic justice issue. The MORE Act brings us one step closer to ending the failed war on drugs, but our work isn’t done. The BIPOC communities who have been criminalized/over-policed must reap the financial rewards of the expanding industry.”

Nydia Velazquez (D-NY) tweeted: “For far too long, the criminalization of marijuana has led to disproportionate sentencing for communities of color. On Friday the House passed the MORE Act, landmark legislation that would take a step forward in delivering justice to these communities.”

However, MORE’s fate in the Senate is cloudy. In speeches on the Senate floor, Senate Majority Leader Mitch McConnell (R-KY) has ridiculed House Speaker Nancy Pelosi (D-CA) over her statements that marijuana is a useful medical therapy. In terms of marijuana legalization, McConnell has been The Grim Reaper.

There are glimmers of hope that may change, though. McConnell recently met with marijuana lobbyists and Kentucky farmers are in dire need of a cash crop to replace tobacco. In recent years, as anti-smoking laws and regulations gain ground, cash receipts for tobacco in the Bluegrass State have plummeted.

If the Georgia Senate runoffs on January 5 give Democrats control of the chamber, pro-marijuana lawmaker Charles Schumer (D-NY) would take the reins from McConnell and MORE would almost certainly get a floor vote and pass. Joe Biden has indicated he would sign the bill.

As Dylan sang in the aforementioned song:

The House vote last Friday to approve MORE has brought our country closer to marijuana legalization than we’ve ever been in history. The current political environment means we could be one Senate vote away from full legalization. And the timing couldn’t be better. Our investment team just uncovered one neglected pot company that’s set to blast off when it does. Click here for details.