I first started working as a journalist in 1981, during the “dead tree” era of media. Back then, newspapers, newsletters and magazines were print-based. The Pentagon was running an obscure military project called the Advanced Research Projects Agency Network (ARPANET), the origin of the Internet. Whenever I wrote a story, it would arrive the next morning in the hard-copy newspaper, with a thud in my driveway.

How the world has changed! Today’s media serve up a vast digital cornucopia of anything you want, when you want it, on demand, on any WiFi-connected device, twenty-four seven. For investors, the profits can be enormous.

And yet, as this week’s big news about AT&T (NYSE: T) shows, the road can be bumpy. I’ll get to AT&T in a minute. I’ll also pinpoint a long-term media technology trend that’s particularly promising for investors.

On demand, around the clock…

Investment winners during the COVID-19 crisis have been media and entertainment companies, as quarantines increasingly drive people to seek diversion and information from their televisions and mobile devices.

The benchmark iShares Evolved U.S. Media and Entertainment ETF (IEME) has generated a total return of 62.4% during the past 12 months, compared to 47.5% for the SPDR S&P 500 ETF Trust (SPY) over the same time frame, as of market close May 18.

IEME’s outperformance is likely to continue this year, as the pandemic stokes demand for digital media. Even after COVID has faded, consumers will be more hooked on media and entertainment than ever.

In pre-market futures contracts Wednesday, stocks were extending their losses. As I’ve previously written, I think fears of runaway inflation are overblown and you shouldn’t let them derail your overall investment strategy.

Factors are currently in place, in large part created by the pandemic itself, that are positioning multimedia companies for continued upward trajectory. Investors who pick the right media stocks stand to reap a fortune, but the bewildering pace of technological change makes it difficult to sort the winners from the losers.

The pace of “cord cutting,” the phenomenon of viewers canceling their cable subscriptions and switching to online options, is mounting. Many media giants keep adding broadband subscribers while losing video subscribers. This dynamic is poised to deliver outsized gains in 2021 and beyond, as economic growth accelerates and consumers get even more accustomed to streaming video at ultra-fast speeds.

However, for the past four decades, starting with the dawn of the de-regulatory Reagan Era, a relaxation of anti-trust rules has fueled a relentless series of mergers and acquisitions (M&As).

The run-up in stock prices since late March 2020, notably among big media companies, has filled the coffers of corporate giants with huge piles of cash. Those companies are putting that money to work, by going on a shopping spree.

Cable firms are leveraging the M&A boom to transition from content distributors to content creators, with a focus on streaming video on demand (SVoD). The market is far from saturated. Global revenue in the SVoD segment is expected to reach $30.4 billion in 2024, up from $25.8 billion in 2020 (see chart). 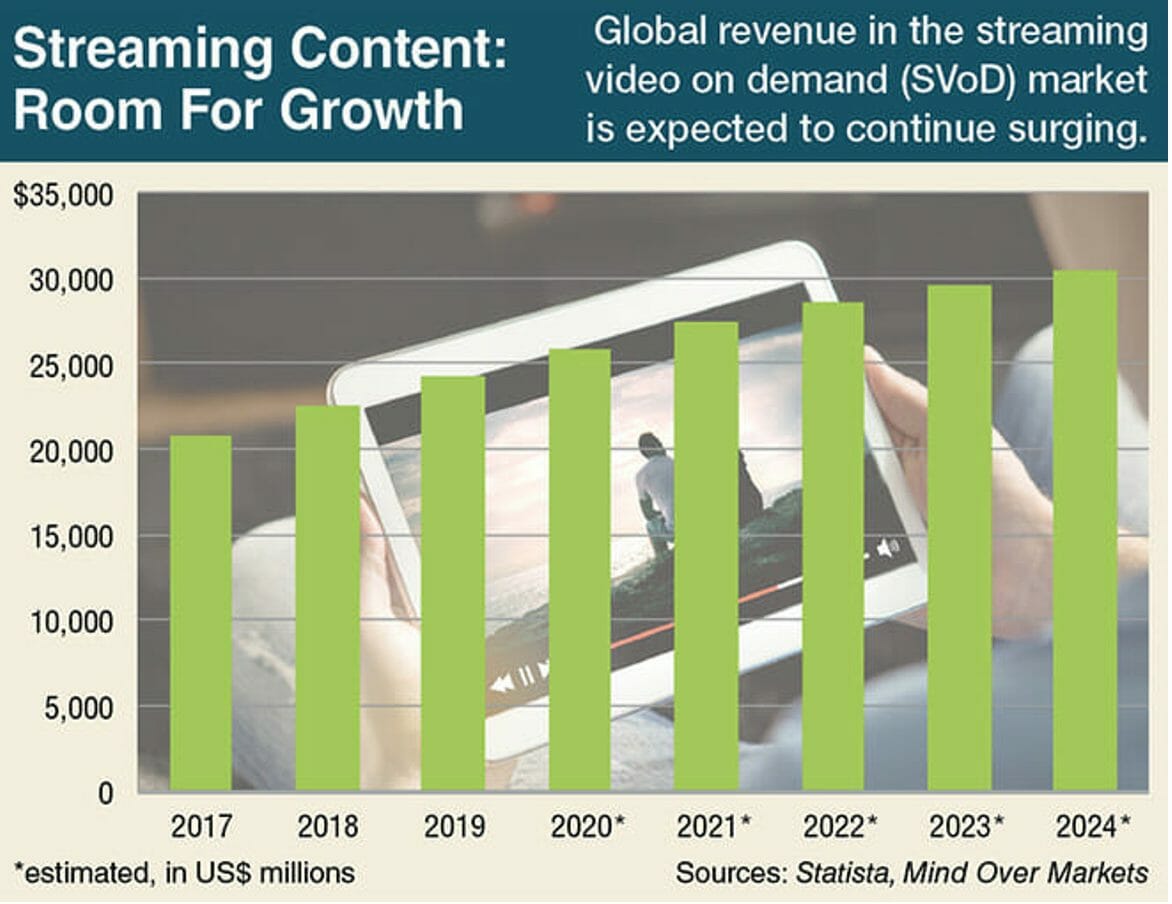 However, for the multinational corporations that own and operate this media, there are great risks. Fierce competition puts pressure on prices (and profit margins) and disruptive technologies threaten the status quo. Investing in new infrastructure is expensive. And sometimes, what appears to be the right strategic path turns out to be a dead end.

Emblematic of these struggles is AT&T, a storied telecommunications giant that lost its way by making ill-conceived acquisitions. AT&T over the years has tried to aggressively re-position into multi-media. This week, the company threw in the towel.

AT&T announced Monday it will spin off its media division WarnerMedia and merge it with Discovery (NSDQ: DISCA). The move combines household brand names such as WarnerMedia’s HBO and CNN with Discovery’s HGTV, Animal Planet, Food Network, and TLC under one corporate umbrella.

In February, AT&T made a similar move when it sold a minority stake in its video business DirecTV to private equity firm TPG. The deal was valued at roughly $16 billion, less than a third of the $49 billion AT&T spent to buy DirecTV in 2015.

This week, AT&T surprised Wall Street by announcing its intent to make a similar move with its WarnerMedia division in a deal with Discovery. The newly merged WarnerMedia and Discovery would forge one of the world’s largest global streaming platforms, in direct competition with Amazon (NSDQ: AMZN) and Netflix (NSDQ: NFLX).

The Discovery spin-off was an admission from telecom giant AT&T that it couldn’t successfully derive value from Time Warner, which it spent $85 billion to acquire only three years ago.

The court victory in June 2018 of AT&T’s bid to acquire Time Warner and its rich library of content was an ostensible boon for the telecom. Didn’t turn out that way.

Netflix and Amazon have continually plowed huge sums into creating original, quality content. Viewers are increasingly jaded and their attention spans are short; mind share is won by highly creative (and expensive) shows, movies and documentaries. It’s the original content that wins awards and new customers; the Silicon Valley titans have sufficient cash to fund it.

This dynamic diminished the value of the pre-existing Time Warner content for which AT&T overpaid. The merger also left AT&T with a lot of debt.

AT&T plans to use proceeds from the DirecTV and Discovery mega-deals to pay down its whopping debt of more than $160 billion. Once it becomes a pure-play telecom again, AT&T will be in fitter, leaner shape to implement its 5G (fifth generation) wireless network. Investing in new 5G infrastructure is expensive; AT&T will now have the cash to stay in the game.

At the heart of multimedia’s evolution is the global implementation of 5G wireless technology, which provides super-fast connectivity and download speeds. Media companies that fall behind in the 5G race will stay behind.

The expansion of streaming 5G services represents an unstoppable trend, which is why competition in the media/telecommunications space is so brutal.

Our investment experts have unearthed a little-known stock that’s a crucial player in 5G wireless capabilities. It’s an under-the-radar tech innovator that nonetheless trades at a reasonable valuation, despite the recent run-up in the broader stock market.

The time to invest in this bargain-priced company is now, before the rest of the herd catches on and bids up its price. Click here for details.