When I was a kid, I loved to watch Dragnet, a television crime drama that ran from 1951 to 1970. Jack Webb, who played detective Sgt. Joe Friday on the long-running show, had a catchphrase that became iconic: “Just the facts, ma’am.”

We follow the Jack Webb school of investing. No preconceived notions, no personal agendas, no ideological axes to grind. Just the facts. And by most facts today, investors should keep an eye on inflation.

As the Federal Reserve sustains loose monetary policies and the Biden administration prepares massive fiscal stimulus, some analysts warn that the economy will overheat, triggering runaway inflation. Others aren’t worried and believe a modest amount of inflation is necessary to get the economy back on its feet. The following chart depicts the current state of inflation in the United States: 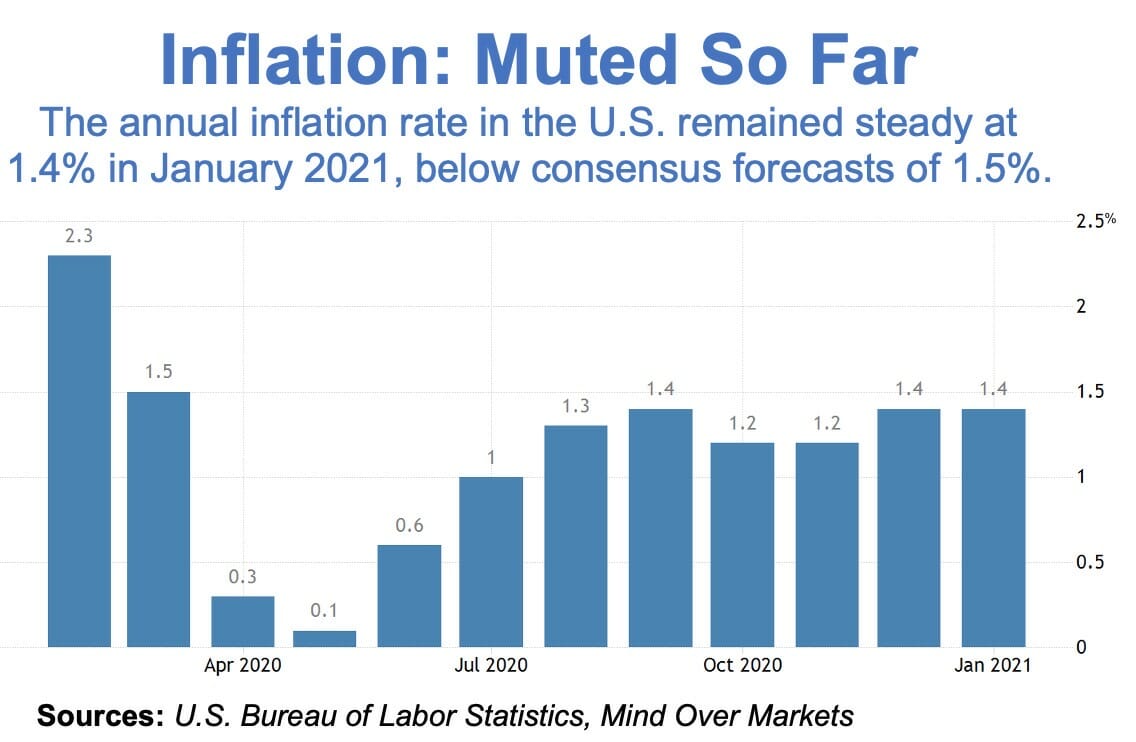 Inflation seems to be mild (for now), but complacency is dangerous. Our investment strategists have written extensively on inflation in recent days, with views that run the gamut from dovish to hawkish. I’ve rendered my own analysis on the topic, in my most recent video presentation.

But as an individual investor, where do you stand? Here’s a representative sampling of reader opinions we’ve recently received on inflation, to add more voices to the marketplace of ideas. At the bottom of this article, I steer you toward a specific investment opportunity that should thrive in the macroeconomic context of this discussion.

The Marketplace of Ideas

“We’re already experiencing inflation specifically in prices for food, fuel, prices, gasoline, and home heating oil. I have little doubt that it will continue, while at the same time the federal government will begin raising taxes, making it a double-edged sword.” — Bob L.

“I will point out a contrarian view. A very successful Canadian tech guy named Jeff Mott has written a book titled, ‘The Price of Tomorrow,’ in which he argues forcefully for DEFLATION due to technology. I read the book and Mr. Mott is quite persuasive, but I do not own a crystal ball and have no clue what the future holds. I have owned Bitcoin since the summer and am up over 200%. I also own Ethereum, copper and gold miners, along with names like Visa. Let’s see what comes our way. BTW, cocoa which is an important ingredient for the company I work for, is flat on its back.” — Gregg C.

Read This Story: I’m Gearing Up For Inflation, And So Should You…

“My input to the inflation debate is a simple example of my shopping at Costco. Over the last few years, the packages have gotten smaller and in some cases with a price increase too. Yes, inflation is real and I am not sure how the feds can keep saying the inflation target of 2% or 2.5 % hasn’t been met.” — Gaurav

“Groceries are much more expensive. I cannot understand how the government can say it needs to spend big to create jobs while cutting out jobs with their policies. Higher minimum wages and such will increase prices on things sold by small and large businesses. No doubt taxes and other prices will increase just as the President promised.” — Joe B.

“I frankly am not worried about inflation. I’ve lived through the ’70s and I don’t see a repeat. Yes, you can cherry pick consumer price data to prove inflation, you can also prove the opposite. I am more worried about repeating the 2009 mistake of not providing enough stimulus and having the economy not recover fast enough.” — Karl S.

“My gut feeling is that (a) this is an unprecedented crisis so (b) unprecedented action is required. I believe that the Federal Reserve governors are acutely aware of the problems inflation caused in the past and will pounce if it rears its ugly head. However, with inflation so low that the Fed has had to struggle to prevent deflation, we have a lot of room for economic expansion once the pandemic has passed, so there will be time to respond if it occurs.

I also believe that if the COVID-19 rescue package is followed by a large but well focused infrastructure investment package coupled with a properly targeted (i.e., progressive) tax increase, the economy will grow dramatically with manageable inflation. Libertarian/free market advocates have carried things too far. Something more like European-style ‘social democracy’ would do wonders for the nation.” — Rob

“I work in the logistics and transportation industry and my clients are very upset with freight price inflation that has continued unabated since April 2020. For truck freight, ocean freight, and air freight, pricing continues to increase at a 20-25% clip or more. Ocean freight rate increases per container have risen 50% or more.

Many clients have not yet passed these increases to consumers, except for the food and medical industries. When retail importers and general manufacturing CEOs finally see what has been happening, these costs will force prices to move up and be passed to the end user/purchaser.” — Richard K.

“Inflation is a hard-to-grip dynamic. It is not easily turned on or off. I suspect big time inflation is in our future but it is hard to predict the timing. I am concerned about an unforeseen black swan event triggering some unknown crisis and the response ignites a broad inflation wave.

So what is an investor to do? I devote a portion of my total portfolio to an ‘Anti-Inflation Package.’ It has the usual stuff: energy, metals and timber equities, precious metals, a gold mining royalty company, an agriculture fund, and US/Foreign TIPS. Hopefully, the package holds its own before severe inflation, then kicks in more significantly when rising inflation becomes an important part of the evening news.” — Dean M.

The Key Takeaway: This year, we’re likely to get faster economic growth, fueled by new fiscal stimulus and ambitious infrastructure spending. It adds up to rising commodities prices, to the benefit of raw materials miners.

Every portfolio should have exposure to commodities, which enjoy greater demand during economic expansions. Commodities also make a proven hedge against inflation, which (as explained above) is showing signs of increasing. For details about a small-cap miner that’s uniquely positioned to prosper under these conditions, click here now.

John Persinos is the editorial director of Investing Daily. To subscribe to John’s video channel, follow this link. To weigh in on the inflation debate, send your email to: mailbag@investingdaily.com