Welcome to my video presentation for today. For details, read the article below.

Will we see higher inflation in the long run? Sure, maybe. But as economist John Maynard Keynes famously said: “In the long run, we are all dead.”

What did this giant of the economics field mean by his oft-quoted remark? Simply this: Immediate financial needs often can’t wait for historical inevitability. During pandemic-afflicted 2021, worries about inflation are premature. What matters right now is dealing with the human and economic pain that’s all around us.

For the stock market rally to continue, the economy needs stimulus and chronic unemployment must be alleviated. Let’s see what’s driving markets and how you should position your portfolio.

The House Financial Services Committee on Thursday held the first congressional hearing on the GameStop (NYSE: GME) stock market controversy. When grilled by lawmakers, the CEO of the trading platform Robinhood apologized to customers for restricting their ability to trade at the height of the frenzy.

Members of the committee questioned a panel of six witnesses appearing remotely. They inquired whether extreme volatility last month in shares of the video-game retailer revealed conflicts of interest that can harm unsophisticated individual investors.

As I suspected, the hearing was little more than kabuki theater. In my view, the “short squeeze” drama is likely to eventually fade, without tangible regulatory or legislative consequences. 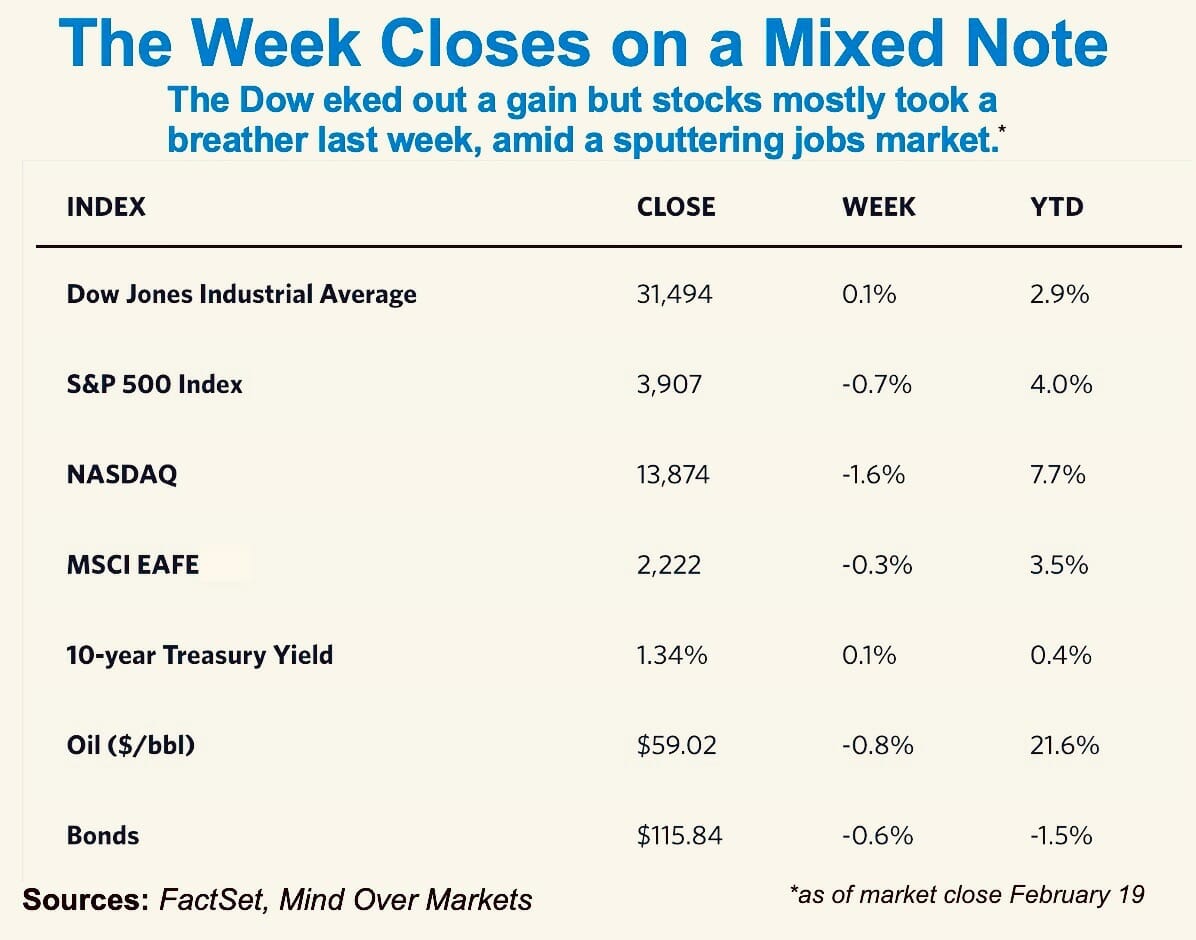 Economic data have been mixed. Retail sales and home prices are strong, but unemployment levels are stubbornly elevated.

Often lost in the parsing of the jobs numbers is the fact that the labor force participation rate is lower than it was before the COVID-19 outbreak, as frustrated Americans quit looking for jobs. Unemployment has disproportionately afflicted women and minorities. Many lost jobs are never coming back.

Paradoxically, weak employment numbers have been fueling the rise in stocks, because the crisis in the workforce motivates lawmakers to pass a relief package. Part of Biden’s proposed package includes extended jobless benefits that are slated to expire in mid-March. Without this extension, many Americans would find themselves destitute.

The U.S. Labor Department reported last Thursday that first-time filings for jobless claims totaled 861,000 last week, above the consensus estimate of 773,000. The total for the week ended February 13 represented a modest increase from the 848,000 a week earlier (see chart). 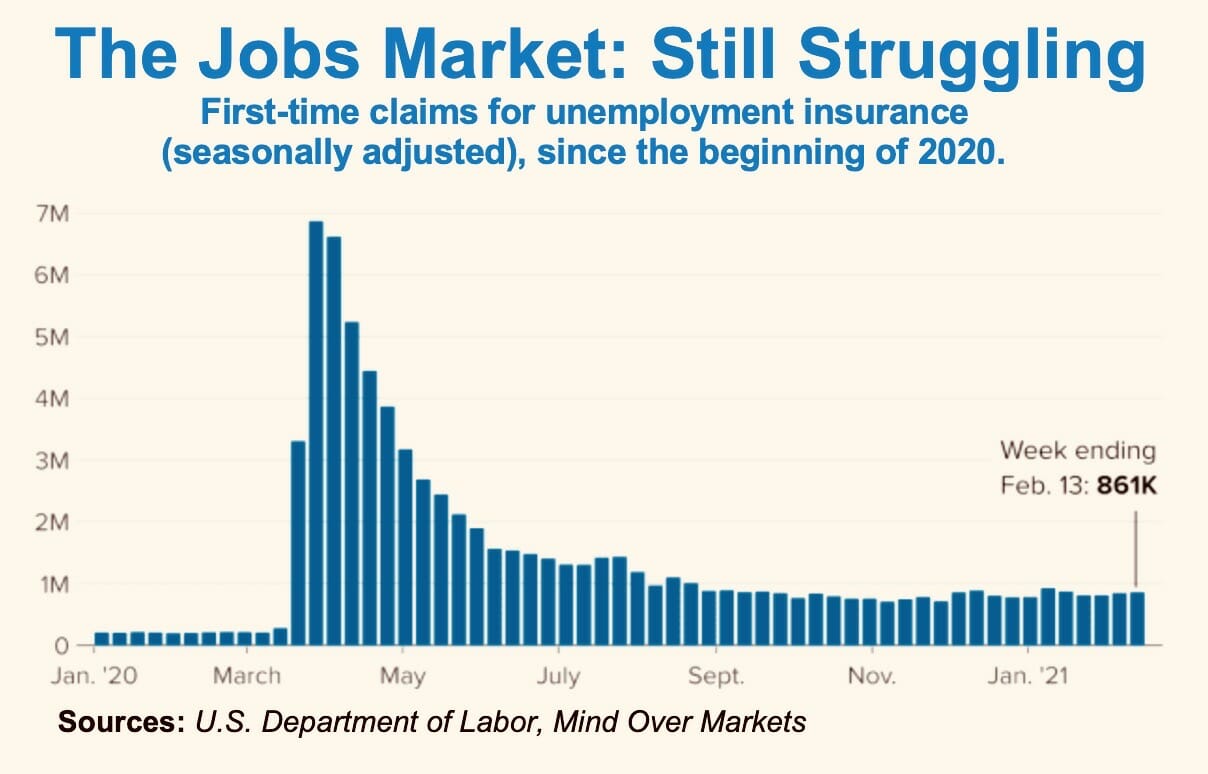 My outlook remains bullish. The economy is grappling with headwinds from lockdowns, but the table is set for growth amid vaccination roll-outs.

The enactment of fiscal stimulus would sustain the current rally, although it wouldn’t necessarily result in a sharp spike in equities. Markets are forward looking and investors already have been anticipating stimulus. They’re also betting (correctly) on a future infrastructure spending spree, which makes construction-related equities a shrewd proactive choice.

Our readers weigh in…

Investing Daily readers in recent days have sent a flurry of emails to our team of analysts, expressing concern that federal stimulus will trigger ruinous inflation. Many of you make valid points, which I will soon share with all readers (more on that in a minute).

As for me, I’m not overly concerned about inflation. My biggest concern is that fiscal stimulus won’t be big enough. Let’s not forget, we suffered the worst economic downturn last year since the Great Depression.

Inflation projections for 2021 are low. The Fed projects that core inflation, which excludes the costs of food and energy, will run at about 2.2% in 2021, up from 1.6% at the end of 2020. When 10 million Americans remain out of work and 19 million possibly face eviction from their homes, a modest amount of inflation to “prime the pump” (a Keynesian term) is desirable.

The inflation hawks you’ve been hearing on cable news lately are driven by their preconceived ideological antipathy to government action of any type. We may see prices tick upward later this year, but it’ll be temporary and won’t represent a multi-month secular rise.

In addition to slack in the economy, other factors should keep inflation from returning to the hyper-levels we witnessed during the “stagflation” 1970s. Globalization is more pronounced than it was back then, which keeps a lid on wage growth. The greying of society also dampens inflation, as does automation in the workforce.

Economists, like military generals, sometimes fight the last war without realizing that the rules of engagement have changed. The inflation alarmists point out that interest rates are rising, as indeed they have been (see chart). 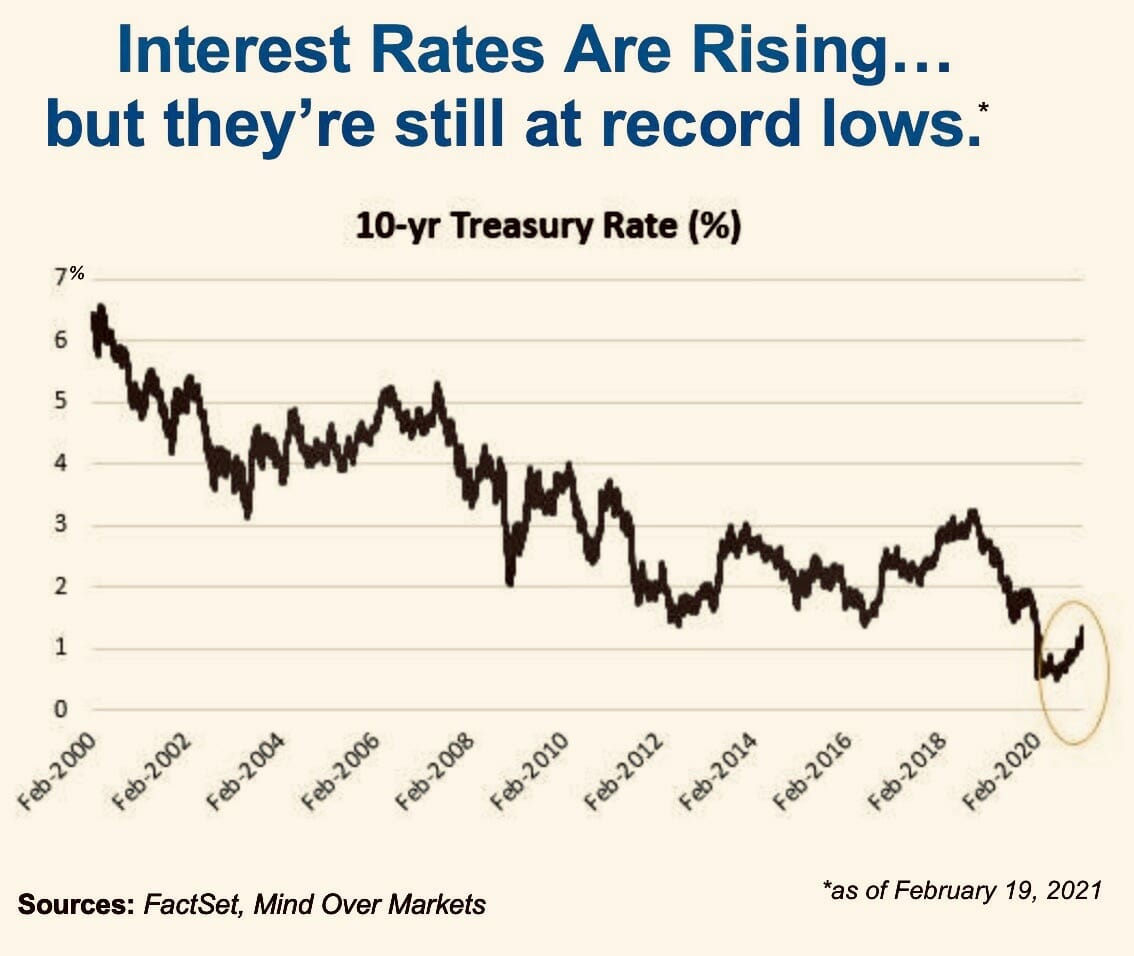 The argument goes that higher inflation would cause the Federal Reserve to tap on the brakes by raising rates, thereby killing the rally. That argument may have had merit in a previous era, but it doesn’t apply today.

For starters, the Fed is purposely trying to foster a modest amount of inflation. That’s the Fed’s current policy. If inflation flares up, the Fed will remain patient and not overreact, knowing that price pressures will be temporary. Federal Reserve Chair Jerome Powell has come right out and said as much. As the saying goes, don’t fight the Fed.

Rates are rising for reasons that are beneficial. Inflation expectations are higher, but this reflects the comparison to this period in 2020 when prices plunged as demand imploded due to pandemic lockdowns.

The recent rise in interest rates that has been driven by higher expected inflation is actually a good thing, because it points to an economy that’s rebounding. What’s more, interest rates continue to scrape historic lows. “Higher” rates don’t equate to “high” rates.

The signs point to a healthy economic rebound in 2021, providing enough juice to sustain the stock market rally.

These mildly inflationary conditions are a boon for economically sensitive investments, notably commodities such as copper, lithium and of course gold.

Read This Story: The Rise of the Commodities “Super-Cycle”

Every portfolio should have exposure to commodities, especially now because raw materials tend to rise in value in tandem with inflation.

With the aforementioned trends in mind, our investment team has put together a new special report: “5 Red Hot Stocks to Own in 2021.” As the economic recovery strengthens, these growth stocks should outpace the broader market this year and beyond. For your copy of our report, click here.

Editor’s Note: Care to weigh in on the topic of inflation? In tomorrow’s Mind Over Markets, I’ll publish a sampling of reader feedback on inflation. Some of you aren’t worried, whereas others among you are quite worried indeed. I relish a healthy debate. Send your opinions to: mailbag@investingdaily.com