Bull vs. Bear: A Fork in the Road

Two roads diverged in a yellow wood,
And sorry I could not travel both
And be one traveler, long I stood…

Those are the opening words to Robert Frost’s famous poem, The Road Not Taken. Frost extolled New England life and I’m a native of the region, so his poetry resonates with me. Those three lines have echoed in my head lately when I see conflicting data on the economy or pandemic.

For investors, rarely have two roads diverged so dramatically, for so long. During the COVID-19 crisis, we’ve gone from bull market to bear market and back to bull market; from economic expansion to sharp recession to tentative recovery; from coronavirus outbreak to ostensible improvement to deadly resurgence.

As 2021 gets underway, which direction should you take? Below, I’ll explain why you should choose the bullish course. I’ll also pinpoint a specific investment opportunity that’s set to soar in the new political environment.

A mixed bag of trends…

That said, investors continue to grapple with a mixed bag of economic data. After growth of 33.4% in the third quarter, U.S. economic growth is expected to slow to 4.5% in the fourth quarter, according to research firm FactSet. Analysts have been adjusting their forecasts lower over the last several months. In Q4 2020, the May estimate was for growth of 8.2%.

We’re now also seeing downgrades to the growth forecast for the first quarter of 2021. As of July, analysts were projecting a 5.9% expansion for early 2021. By last month, that number had been revised down to 2.5%. The following chart provides context: 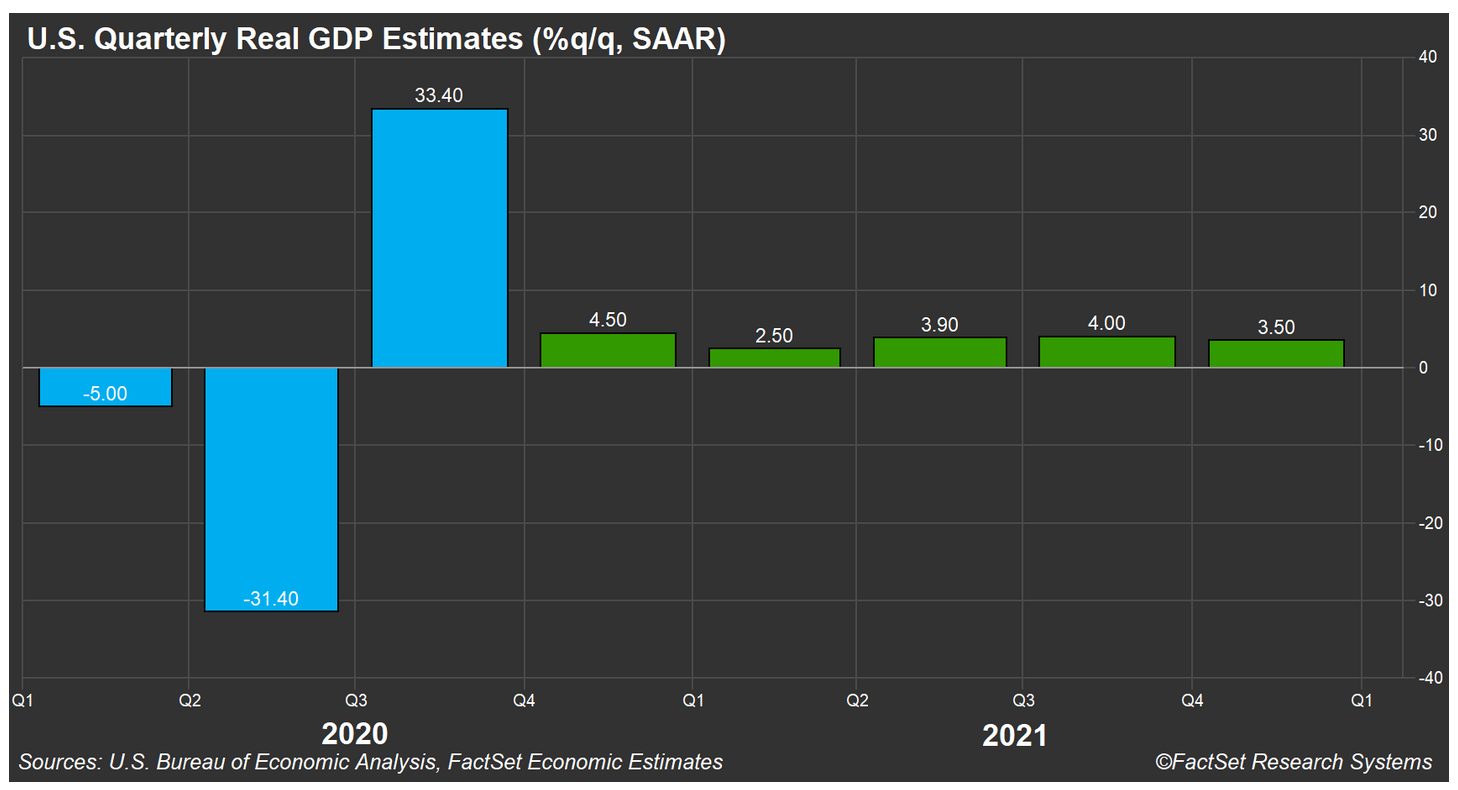 The strong improvement we saw in the labor market last summer sputtered over the last four months of 2020. A worrisome trend is the growing ranks of people who are dropping out of the labor force. In addition, many workers are getting rehired at a fraction of their previous pay.

The U.S. Labor Department reported Tuesday that job openings, a gauge of labor demand, declined 105,000 to 6.527 million on the last day of November. The data is from the department’s monthly Job Openings and Labor Turnover Survey, or JOLTS.

The resurgence of the coronavirus is impeding the economic recovery. The U.S. continues to lead the world by cases, at 22.8 million as of Wednesday. But there’s also good news to celebrate. New vaccines are getting administered and certain sectors, such as Big Tech, digital multimedia, and e-commerce, remain vibrant.

We’re also witnessing a boom in the housing market, fueled by ultra-low interest rates and stay-at-home strictures. Americans are motivated by quarantine to improve existing domiciles or seek better ones.

Infrastructure is the lubricant that ensures a smooth-running economy, and that goes for developed as well as developing countries. The interstate highway system built during the Eisenhower administration helped make America the world’s dominant economic power after World War II.

Today, there’s a vital need to build, repair or replace infrastructure in a number of areas such as transportation, electricity, natural gas, and water. Fueling this trend is the world’s growing population.

Under the Biden regime, companies involved in infrastructure are positioned to thrive, especially large construction firms with global reach. The Democratic takeover of the Senate will make it easier for the new president to get public sector spending and other big ticket initiatives through Congress.

The second impeachment of Donald Trump dominates the headlines this week. But let’s not forget, the twin Democratic upsets in the January 5 Georgia Senate run-offs are a very big deal, too.

With the Democrats in charge of the White House and both chambers of Congress, the party should be able to pass ambitious stimulus legislation, along with other prime-the-pump policies. Wall Street knows this; hence the rally in stocks.

Meanwhile, as fourth-quarter 2020 corporate earnings season begins in earnest this week, I expect upside surprises to propel stocks even higher. As this fork in the road, the bullish way beckons.

Another sector poised for outsized growth in 2021 is marijuana. The House last month passed with overwhelming bipartisan support the Marijuana Opportunity Reinvestment and Expungement (MORE) Act of 2019, which would lift federal restrictions on pot.

MORE this year faces excellent odds of passage in a Senate run by Sen. Chuck Schumer (D-NY), who favors marijuana decriminalization. Joe Biden has indicated that he would sign the bill.

Our team of analysts just uncovered a well-positioned pot company that would skyrocket after the Senate vote occurs. The time to buy this weed stock is now, ahead of the news. Click here for details.