If you don’t believe weird things are happening in the stock market these days, consider GameStop (NYSE: GME). As I explain below, social media plays a key role in this tale of extraordinary volatility.

Until two weeks ago, GME had been trading below $20 for the past twelve months. Since then, the stock has roared to life culminating in a meteoric rise above $380 on January 27. 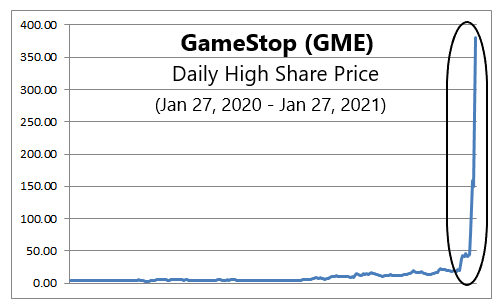 Why the sudden interest in a stock that had been steadily declining for the past five years? The video retailer was regarded as a near-certain casualty of online gaming, which does not require a trip to your local shopping center.

For that reason, short sellers had amassed a sizable position in GME. They believed it was only a matter of time until the company went bankrupt. At that point, the stock would be worthless and their short sales would become pure profit.

They were so sure of their eventual success that many of them used leverage (debt) to magnify their short positions. At the end of December, the number of shares sold short actually exceeded the total number of GME shares outstanding.

With much of the stock held by company insiders that are restricted from trading it, the short position as a percentage of the float (shares actively trading in the market) was an astounding 260%. It was as if the short sellers were daring the stock market to prove them wrong.

Be careful what you wish for. Earlier this month, an analyst following GameStop opined that the stock had become undervalued and raised his price target on the stock. Suddenly, GME became popular with contrarian investors looking for a quick turnaround play.

What ensued is a classic “short squeeze”, which occurs when several short sellers try to close out their positions at the same time. When that happens, the natural equilibrium between a bid (buy) and ask (sell) orders is temporarily obliterated.

Once a short squeeze gets going, the trading algorithms and opportunists that piggyback on momentum stocks go to work. They don’t care why GME is suddenly taking off. They just want a piece of the action so they start buying the stock, too.

Even after that dizzying spate of trading was over, GME was still priced at more than four times its value just two weeks prior. Bear in mind, this is a business with a negative operating margin and rapidly declining revenues. If that isn’t cause for concern, its debt-to-equity ratio of 350 should get your attention.

In the long run, the short sellers may turn to be right. Eventually, GameStop may not be able to avoid bankruptcy. But in the short run, the only thing that seems to matter to many stock market traders is momentum. And right now, GameStop has plenty of that.

The GameStop episode illustrates the danger of a troubling trend currently gaining popularity on Wall Street. A group of proudly defiant stock market traders has banded together to profit by communicating on the ‘wallstreetbets‘ subreddit channel (Reddit is an online forum where readers can exchange ideas).

Most of the commentary is fairly juvenile with little substance. Nevertheless, it is strongly influencing the prices of certain stocks. And as more people engage in this type of trading, its impact on individual stock prices will become more pronounced.

A few weeks ago, I discussed the bizarre circumstances surrounding a huge spike in Signal Advance (OTC: SIGL) that drove its share price up more than 800% in a single day. Five days later, it was back down to where it was before Elon Musk’s cryptic text triggered an avalanche of buy orders.

Soon, the merry band of “Redditors” may feel emboldened to go after bigger companies to amplify their profits. At that point, the U.S. Securities and Exchange Commission (SEC) may feel compelled to act to prevent outright market manipulation from occurring.

I do not advise attempting to make money in the stock market by engaging in what effectively is a Ponzi Scheme. Sooner or later, the bottom will fall out of GameStop and a lot of unsuspecting investors are going to lose a ton of money.