The Return of Contrarian Investing

There hasn’t been much talk about contrarian investing lately. That’s because two dominant themes have been driving stock market performance since well before the coronavirus pandemic.

Tech stocks have been the top-performing sector in three of the past four years. The last time the tech sector performed worse than the S&P 500 Index was eight years ago.

At the other end of the performance spectrum is the energy sector. It has been the worst-performing group of stocks in five of the past seven years. Only once in the past nine years (2016) has it beaten the S&P 500 Index. 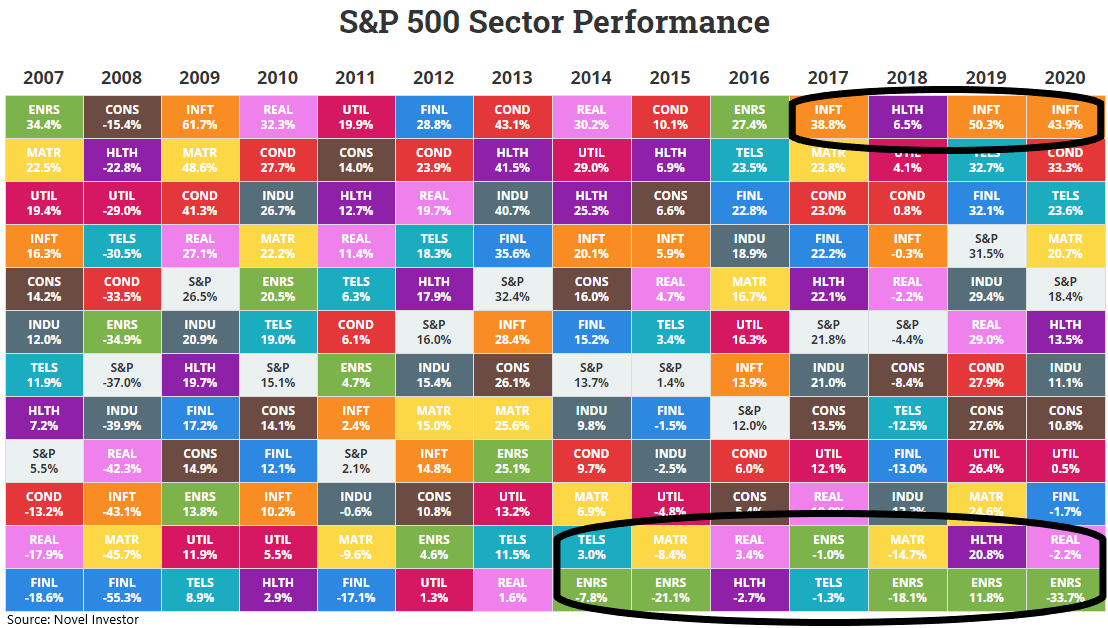 In both cases, the pandemic accentuated trends that were already in place since 2014. That’s when the Federal Reserve decided to do away with Quantitative Easing. That’s also the year when oil prices cratered from $100 a barrel to below $50 by the end of 2015.

Since then, we have been in a growth market fueled by low interest rates, cheap energy, and a massive corporate tax cut enacted three years ago. It is too soon to say if 2021 will be the year that those trends reverse. But based on their performance over the first 10 weeks of this year, that appears to be the case.

Through March 12, the energy sector has been by far the hottest group of stocks with a total return of 40.1%. At the same time, tech stocks have eked out a measly gain of just 0.6%.

That’s because the factors that favored high-multiple momentum stocks are coming to an end. Interest rates are rising. Oil prices are higher. And soon, a new tax bill may return corporate tax rates to their previous levels.

It isn’t that Wall Street is afraid that rising rates and higher taxes will hurt the economy. If that were the case, all of the major stock market indices would be falling hard.

That hasn’t happened. The NASDAQ Composite Index did go through a quick 10% correction last month. But over the past week, it has rallied to cut that deficit in half and is back in positive territory for this year.

Meanwhile, the Dow Jones Industrial Average hit a new all-time high at the end of last week. One of its 30 holdings is oil supermajor Chevron (NYSE: CVX).

The Dow also holds Caterpillar (NYSE: CAT), which stands to benefit from increased infrastructure spending. Since bottoming out below $90 a year ago, CAT has gained more than 150%. 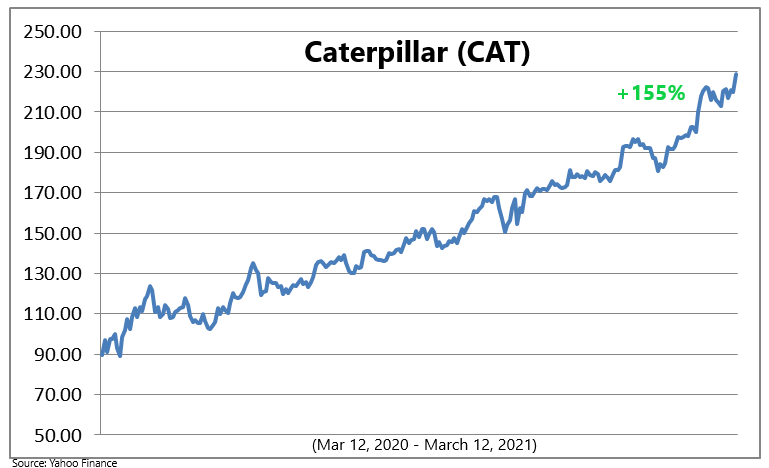 Perhaps most surprising is the rapid rise of Boeing (NYSE: BA). A year ago, Boeing had lost over 70% of its value in just six weeks as the pandemic all but shut down the airline industry. Since then, it has rallied 183% to recoup most of that loss.

But the shift towards contrarian investing doesn’t end there. The second-worst performing sector in 2020, real estate, is also beating the index this year. An even bigger turnaround is being staged by financial stocks, up 17.5% thus far in 2021 after losing 1.7% in 2020.

As impressive as some of those returns may seem, they pale in comparison to the 1,000% rise of Bitcoin (BTC) since last March. During the previous two years, the price of Bitcoin fell in half as the cryptocurrency craze fizzled.

Suddenly, last year’s trash is this year’s cash. Now the question is, how do you play it?

Last May, I recommended the ALPS Sector Dividend Dogs ETF (SDOG) to investors in need of high income. Since then, it has gained more than 50% despite owning stocks that were on the outs with Wall Street at the time.

SDOG owns the five highest-yielding stocks in each of the 10 sectors that comprise the S&P 500 Index. Exxon Mobil (NYSE: XOM) is one of its 50 holdings, as is cigarette manufacturer Altria (NYSE: MO) and retailer Walgreens Boots Alliance (NYSE: WBA).

Those aren’t the types of names that will set a hedge fund manager’s heart on fire, but they are delivering outsized returns. So far this year, WBA is up nearly 40% while MO has posted a 25% gain.

Heck, even men’s undergarments maker Hanesbrands (NYSE: HBI) has jumped more than a third since the start of the year. It doesn’t seem to matter what business the company is in. If it pays a high dividend and got beat up last year, then it must be good!

Of course, the true explanation is more nuanced than that. Nevertheless, the contrarian mindset that is currently driving Wall Street is clearly visible in nearly every sector of the market.

Likewise, a contrarian attitude runs through our flagship publication, Personal Finance. I’m the chief investment strategist of PF and I assure you, it’s my policy to buck the herd mentality.

I want you to know that I’ve just found an under-the-radar investment opportunity. The pundits on Wall Street or CNBC aren’t chattering about this stock, but it’s poised to make early investors rich. Click here for details.