Should You Invest in Bonds?

Last week, I wrote about why some risk is good for an investor in terms of the stock market’s return over the past 20 years. I mentioned U.S. Treasurys (U.S. government bonds) as a “riskless” asset. Today, let’s take a closer look at bonds.

The bond market is actually much larger than the stock market. In terms of debt outstanding, the global bond market is estimated to be about $130 trillion. By comparison, the global capitalization of stocks is worth about $80 trillion. Issuers of bonds include national and local government, corporations, and various types of organizations.

When you buy a stock in a company, you become an owner of the company. When you buy a bond issued by a company, you become a creditor of the company. Typically, a bond will pay you a regular interest indicated by its coupon rate, and at maturity will pay you back the face value of the bond (plus the final interest payment). For instance, a 10-year bond with a face value of $1,000 and a coupon rate of 3% that pays interest semi-annually will pay you $15 every six months and $1,015 at maturity.

As a bondholder, your primary concern is that the entity you lend to can pay you the interest and principal (at maturity) as scheduled. In the case of corporate bonds, when a company increases its sales and earnings, it’s good for stock holders because their share of the company, all else equal, would be worth more. But for you as a creditor, you don’t directly benefit from a company’s growth so when faced with a choice between financial stability and growth, you would choose financial stability.

Put another way, if you were a growth-stock investor, you probably wouldn’t consider a consumer staples conglomerate that generates steady profit and free cash flow but struggles with sales growth. However, if you were a bond investor who wants a company with low risk, that type of company would be something to consider.

Investors will demand a higher return (yield) in order to invest in lower-quality bonds. This makes sense. To be compensated for taking on higher risk, investors will want a higher return. Credit agencies like Standard & Poor’s and Moody’s rank bonds according to their default risk. The higher the rating, the lower the yield.

Now, if things go horribly and the entity goes belly up, in the event of asset liquidation, you will have higher claim to the company’s assets before shareholders. However, no investor wants to get to that stage.

Inflation Is Your Foe

If you invest in bonds, besides default risk you will need to be wary of inflation. When inflation rises, buying power falls. Let’s say you are receiving a fixed amount of $5,000 from bond interest every year, when prices of goods are going up, you would be able to buy less and less with that $5,000. Some bonds offer variable interest that adjust to inflation, but those typically have a lower coupon rate.

Also, interest rates usually rise when inflation is increasing. Bond prices fall when interest rates rise. Imagine you have a bond that pays 3% a year. When inflation is 1%, that 3% looks good. You are earning a 2% real return. But if inflation rises to 5%, suddenly you are losing spending power because you only get 3% a year from the bond. Moreover, there’s opportunity cost to holding that 3% coupon bond. You could have invested your money in another instrument that pays you 5% a year.

As a result, if interest rates rise after you purchase a bond, and you want to sell that bond, you will likely have sell it at a loss. If you intend to hold a bond to maturity, the change in bond prices won’t affect you because at maturity, you will get the face value of the bond. However, there’s no escaping the other issues, such as loss of spending power to inflation and opportunity cost, as I mentioned above.

With all that said, the $1 million question is, how have bonds performed? 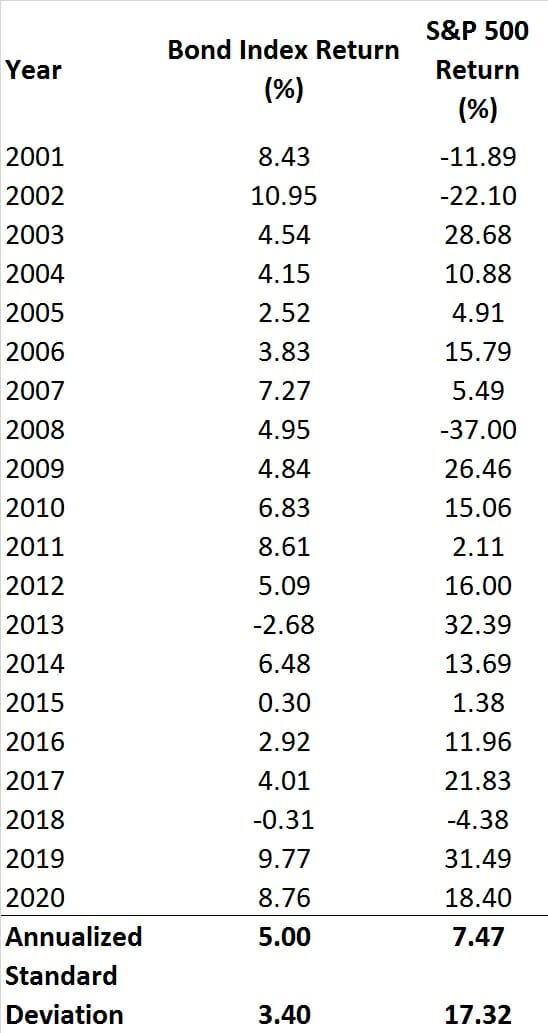 The table shows the year-by-year comparison between the S&P 500 Index (proxy for stocks) and the Bank of America Merrill Lynch U.S. Corporate, Government and Mortgage Bond Index (proxy for bonds).

The standard deviation for the bond index, though, is clearly much smaller than that of stocks. Indeed, bonds are less risky than stocks. But as discussed last week, risk isn’t necessarily a bad thing. Yes, bonds tend to be less volatile, but over time, you still would have made more money by investing in stocks than in bonds.

On an annualized basis, the stock return may not seem that much higher than that of bonds (7.5% vs. 5.0%), but over time the difference adds up.

Keep in mind that the annualized return is a geometric mean. It takes compounding into account. If you were earnings 7% every year in stocks and 5% every year in bonds, after 20 years, $10,000 invested in stocks would’ve become $42,231, compared to only $26,533 for bonds.

However, there is a time and place for less volatile investments. For example, if you are retired and you know you will need to constantly withdraw money from your investment portfolio to pay for your living expenses, you would probably feel more secure with assets that aren’t moving up and down a lot.

But make no mistake, if your goal is to earn a huge return, your better bet would be stocks.

Editor’s Note: Scott Chan just provided you with invaluable investing advice, especially if your focus is on safety and income. But this article only scratches the surface of our team’s expertise.

It’s hard to imagine becoming a millionaire off one stock. But that’s exactly what happened to those who moved early enough on any one of the famous FAANG stocks. And it’s exactly what could happen to you, if you follow Jim Pearce’s simple trade. Click here for details.