Profiting From The “Shroom Boom”

He will bring happiness in a pipe,
He’ll ride away on his silver bike
And apart from that he’ll be so kind
In consenting to blow your mind.
Fly Jefferson Airplane, get you there on time…

Those lyrics are from Donovan’s 1966 iconic song “Fat Angel,” a psychedelic tribute to Mama Cass and the Jefferson Airplane. Before I get to the latest investment ramifications of psychedelics, allow me to explain the significance of the song’s silver bike.

Because of the rationing of gasoline during World War II, chemist Albert Hofmann had to use a bicycle to commute to his job at Sandoz Pharmaceuticals in Basel, Switzerland. Hofmann’s research entailed synthesizing plant compounds for medicinal use.

On April 19, 1943, Hofmann discovered and ingested 250 micrograms of lysergic acid diethylamide, otherwise known as LSD. Hofmann pedaled home on his silver bike, high as a kite, and rode into history as the first person to take an LSD trip.

Every year on April 19, devotees of psychedelia celebrate the international holiday called Bicycle Day. It’s a holiday for LSD and other psychedelic substances, akin to 4/20 for cannabis.

To commemorate Bicycle Day next month, I’ll publish a special report in this newsletter on psychedelics as investments. In the meantime, a lot has been happening in the world of psychedelics, in terms of its legal status and profitable potential. Let’s take a look.

Oregon consents to blow your mind…

Measure 109, the Psilocybin Program Initiative, was on the ballot in Oregon as an initiated state statute on November 3, 2020. It was approved, with 55.75% of the vote. The move made Oregon the first state in the nation to allow the use of psilocybin, the psychoactive ingredient of hallucinogenic mushrooms, in therapy.

A second, separate ballot measure in Oregon also was approved that decriminalizes possession of small amounts of LSD, heroin, cocaine, oxycodone and other drugs. Oregon now has the most liberal drug laws in the nation.

Under Measure 109, the Oregon Health Authority (OHA) is mandated to create a program to permit licensed service providers to administer psilocybin-producing magic mushrooms to individuals 21 years of age or older. The goal is to make it safe and easy for any adult to take a therapeutic psilocybin trip with a trained guide. The following chart, courtesy of the OHA, shows the timeline of the program: 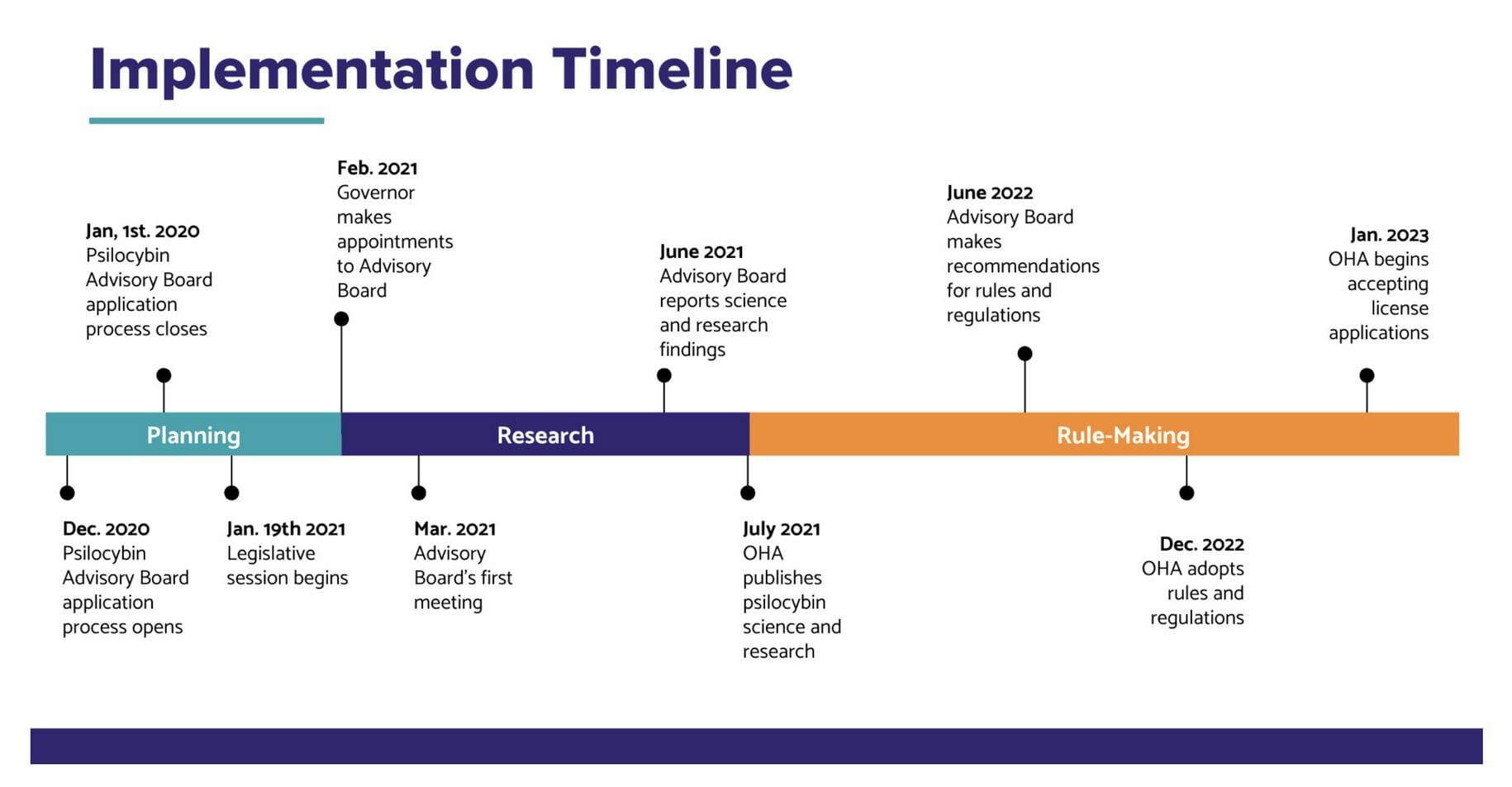 There’s an expanding body of medical research that empirically proves how psilocybin and LSD can treat a host of physical ailments, such as arthritis, as well as psychological ones. Medical researchers in the U.S. are developing a treatment for depression using psilocybin. For chronic diseases that resist conventional treatments, mushrooms often work magic.

LSD has long been a part of psychiatric talk therapy for the wealthy upper class. In fact, in the 1950s and early 1960s, LSD was all the rage among Hollywood’s elite.

Notably, the actor Cary Grant was an avid advocate of LSD and took more than 100 trips under the aegis of his psychiatrist, to deal with his traumatic childhood (as well as his failed marriages). That was before LSD was made illegal in the U.S. in 1966.

Denver, Colorado in 2019 became the first jurisdiction in the U.S. to decriminalize psilocybin fungi. The historic legal change spawned a wave of similar efforts throughout the country.

As with marijuana, psychedelic substances are banned at the federal level. However, as momentum builds to lift restrictions from psychedelics such as LSD and psilocybin fungi, it’s opening a range of opportunities for established companies that have already launched profitable cannabis products.

“Psychedelic” is any psychoactive substance, such as LSD or psilocybin, which causes perceptual changes, visual hallucination, and altered awareness of the body and mind. “Hallucinogen” is any substance tending to induce hallucination. For our purposes here, the words can be considered synonyms.

Since that historic vote in Denver, a nationwide movement has arisen. States and localities are rushing to follow the Mile High City’s lead. Campaigns to decriminalize magic mushrooms resemble early initiatives to normalize marijuana.

The Denver ordinance prohibits the city from spending resources to impose criminal penalties on those who have magic mushrooms. Small businesses are sprouting up like mushrooms (pun intended) in Denver, to meet growing demand for the mind-altering fungi.

Activists in more than 100 cities across the U.S. are now mobilizing to reform their own policies on psychedelics such as magic mushrooms and LSD.

Companies that grow, process and sell magic mushrooms are in their infancy, as was the case when marijuana legalization was about to take off. The penny stocks of fledgling companies devoted to developing magic mushrooms and other psychedelics for medical and recreational purposes are starting to appear on global stock exchanges.

At the same time, cannabis companies are branching out into psychedelics and the two segments are merging. For our report on how to make money from these fast-evolving trends, click here.