Earlier in my career, in my capacity as editor of an aviation publication, I learned how to fly helicopters. My flight school instructor once told me a joke about the complex aerodynamics that keep these noisy contraptions aloft: “Helicopters don’t so much fly as beat the air into submission.”

During the pandemic, policymakers have been using “helicopter money” in an attempt to beat economic woes into submission.

Loosely defined, helicopter money is a term for the government directly distributing money to the public, to shock a struggling economy out of its slump. Critics warn that helicopter money could worsen deficits and spark runaway inflation.

However, the adherents of helicopter money argue that it’s the only effective way to get the pandemic-wounded economy back on its feet.

So far, the tactic has been effective, with economic growth picking up steam and the post-election stock market rally still on track, with inflation (so far) under control.

Stocks have been playing tug-of-war with bond yields for months, as worries about inflation wax and wane. In pre-market futures contracts Tuesday, stocks were rebounding.

Money from the sky…

The term helicopter money was first coined by Nobel Prize-winning economist Milton Friedman in a 1969 paper entitled “The Optimum Quantity of Money,” in which he argued that doling out money to the public (as opposed to giving it to financial institutions) would work better at kick-starting an ailing economy.

Helicopter money has evolved into a fungible term. To be precise, helicopter money was originally defined by Friedman as emanating from central banks. During the coronavirus pandemic, direct stimulus checks to individuals have been fiscal in nature. Nonetheless, extraordinary times call for extraordinary measures. Washington’s policymakers decided it was better for the economy to fly…than to die.

This idea has been debated by economists for years but it’s been given a real-world test since the COVID-19 outbreak in early 2020. We’ve witnessed unprecedented monetary and fiscal stimulus in the U.S. and around the world.

In the U.S. alone, three massive pandemic relief packages have been passed, all with direct payments to individuals. Fiscal stimulus in this country far outpaces the rest of the world (see chart). 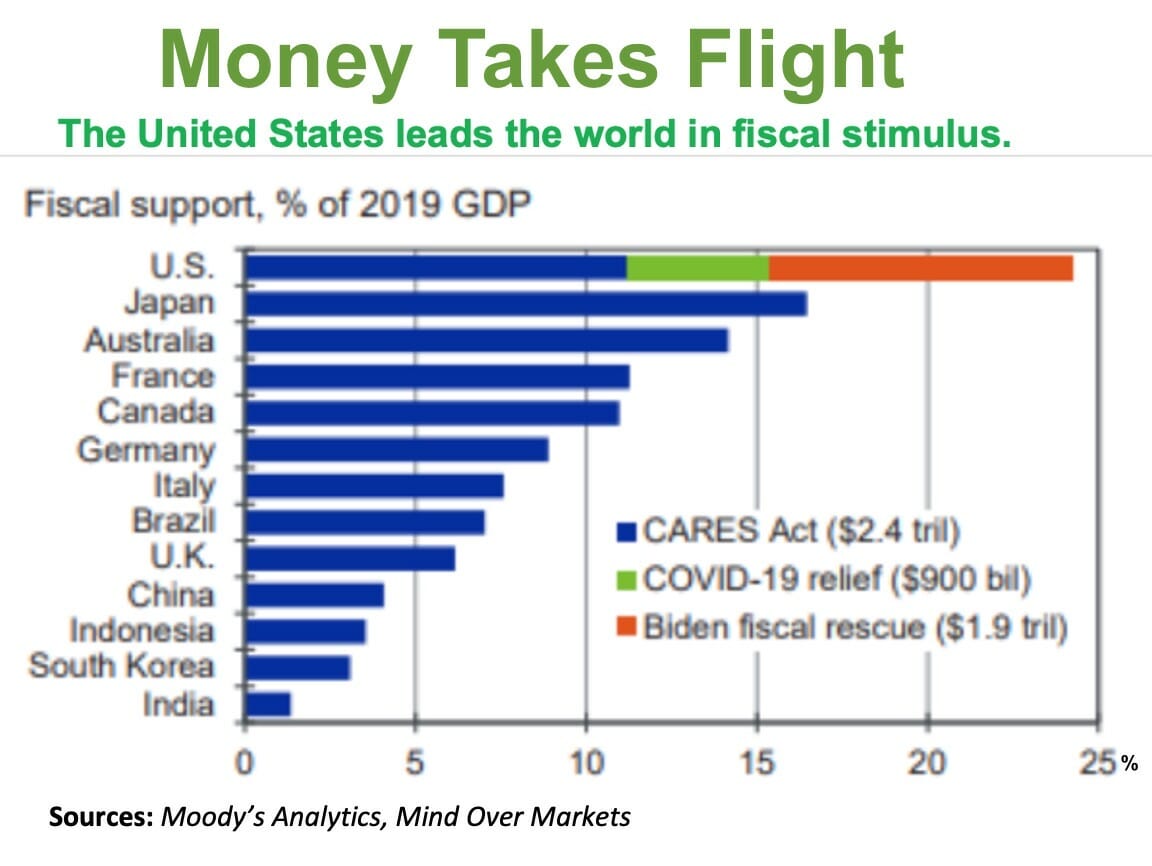 More stimulus is on the way, in the form of President Biden’s plan to spend $2 trillion on infrastructure and jobs. The plan faces a good chance of passage and would generate a multi-year tailwind for the stock market. The rest of the globe, especially China, is stepping up infrastructure spending as well. We stand on the cusp of a secular bull market, fueled by unprecedented liquidity.

Helicopter money is viewed by its proponents as better than quantitative easing during crises. The argument is that instead of pumping liquidity into financial markets via lending institutions, helicopter money stimulates the real economy by transferring money directly to citizens. The latest jobs data strengthen the case for helicopter money (see chart). 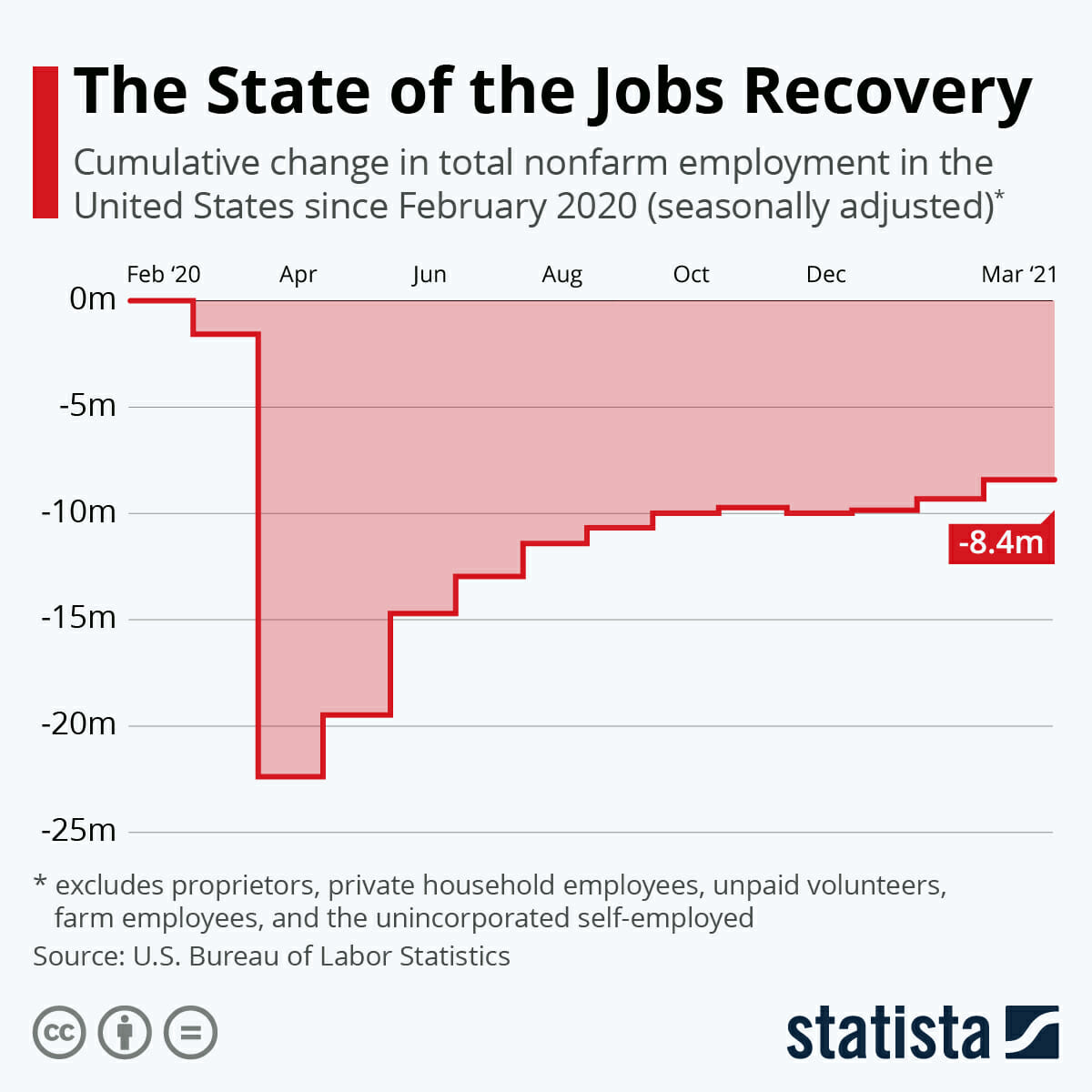 The most recent federal government jobs report showed clear signs of recovery, as the U.S. economy added 916,000 jobs in March, exceeding expectations. The leisure and hospitality sector led the job gains, adding 280,000 payrolls. With stimulus money in their pockets, millions of consumers resumed traveling, and eating and drinking in restaurants and bars.

As the pragmatic FDR said during the depths of the Great Depression: “Do something. If it works, do more of it. If it doesn’t, do something else.” Helicopter money seems to be working and Washington wants to do more of it.

Editor’s Note: If you’re looking for a way to stay bullish without undue risk, you should keep an eye out for an exciting offer from Investing Daily. It’s “the next big thing” from our colleague Robert Rapier, chief investment strategist of Utility Forecaster.

Up, down, sideways… even in the face of rising interest rates… tech selloffs… and anything else Mr. Market throws at you, Robert’s trades are income-generating machines. Watch for details, soon.