Pot Buying Habits, They Are a-Changin’

Long before the television drama Mad Men gave us the fictional Don Draper, there was real-life legend David Ogilvy, who bestrode midcentury Madison Avenue as an advertising god. Suave ad genius Draper is loosely based on Ogilvy.

In his iconic 1963 book Confessions of an Advertising Man, Ogilvy penned a line that became famous: “The customer is not a moron. She’s your wife.”

Which brings me to the marijuana industry. To borrow Ogilvy’s dictum, the pot customer is not a moron. She’s your wife.

Women are the fastest-growing demographic segment of marijuana users. The Cannabis Consumers Coalition recently reported that women now use cannabis more than men, with 53% having tried it compared to just 42% of men. These women increasingly skew toward affluence and 30-plus years of age.

Mothers and grandmothers are getting on the marijuana bandwagon, a reflection of the growing use of weed for “wellness” and holistic purposes. Busy soccer moms, not stoners and slackers, are the new faces of cannabis consumerism.

From back alley to local pharmacy…

The marijuana industry in the U.S. continues to mesh with mainstream society, as more and more states lift criminal restrictions against pot. It’s only a matter of time before the federal ban is lifted.

The report, titled the 2021 U.S. Cannabis Consumer Evolution: Archetypes, Preferences, and Behaviors, provides fresh insights into the contemporary preferences of cannabis users and how the weed buying landscape has changed since 2018 (see chart). 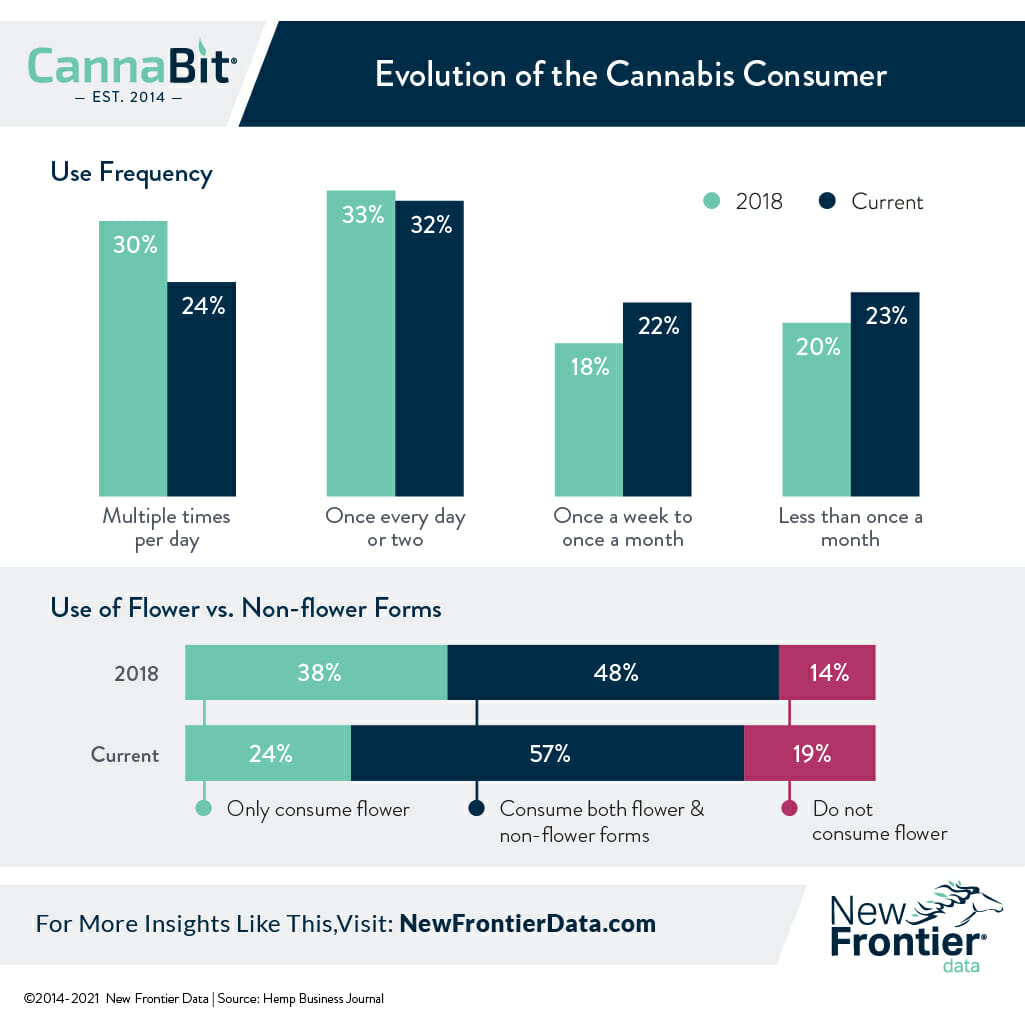 New Frontier chose 2018 as a benchmark because it was an historic year for marijuana. That year, Canada became the second country (and first G7 nation) to legalize adult use cannabis, and the U.S. Food and Drug Administration approved the first cannabis-derived drug.

With the expansion of legal markets, the American consumer increasingly regards marijuana as just another consumer good. New Frontier reports that since 2018, the number of consumers buying cannabis from private dealers has fallen 8% and the number of those acquiring cannabis from friends has declined by 6%. Over the same time period, brick-and-mortar storefronts have witnessed a 13% increase in sales and online delivery services have increased by 7%.

Since 2018, there has been a 14% decrease among consumers who use flower exclusively, while those who only consume non-flower products have increased 5%. Consumers reporting that they have used edibles increased 19%, while those sampling topicals and tinctures each grew by 8%.

The rise of CBD…

Notably, in 2018 one-third of cannabis consumers reported having used a product that’s solely cannabidiol (CBD). By 2021, more than half (54%) reported having consumed a CBD-only product.

Investors looking to target a promising sub-sector of the cannabis industry should consider companies involved with producing and marketing CBD. The compound is becoming a familiar household item.

CBD is migrating into a variety of consumer product categories including food and beverages, pharmaceuticals, health, wellness, and beauty aids. Consumer and health services giants are developing their own CBD products or purchasing smaller CBD companies.

In a separate report, New Frontier compiled the following data about CBD:

Looking to make money on the marijuana trends I’ve just described? Click here for our special report on pot investing. Every portfolio should contain a cannabis investment.

In the meantime, keep an eye out for an exciting offer from Investing Daily. It’s “the next big thing” from our colleague Robert Rapier, chief investment strategist of Utility Forecaster.

Up, down, sideways… even in the face of rising interest rates… tech selloffs… and anything else Mr. Market throws at you, Robert’s trades “print money” like a machine. And because they throw off 3x to 20x more cash, you’ll have the same secret weapon the traders at Goldman Sachs have used for years to consistently beat the S&P 500. Watch for details, soon.