Removing the Handcuffs on Weed

To borrow a peace slogan from the Vietnam War era, suppose they gave a war and nobody came?

Ira Glasser, who ran the American Civil Liberties Union from 1978 to 2001, recently summed up the significance of marijuana legalization on American politics:

“Without marijuana prohibition, the government can’t sustain the drug war. Without marijuana, the use of drugs is negligible, and you can’t justify the law-enforcement and prison spending on the other drugs. Their use is vanishingly small. I always thought that if you could cut the marijuana head off the beast, the drug war couldn’t be sustained.”

U.S. Senate Majority Leader Chuck Schumer (D-NY) seeks to prove Glasser right. Schumer and many of his colleagues in Congress have declared war on the War on Drugs, as this April 14 tweet attests: 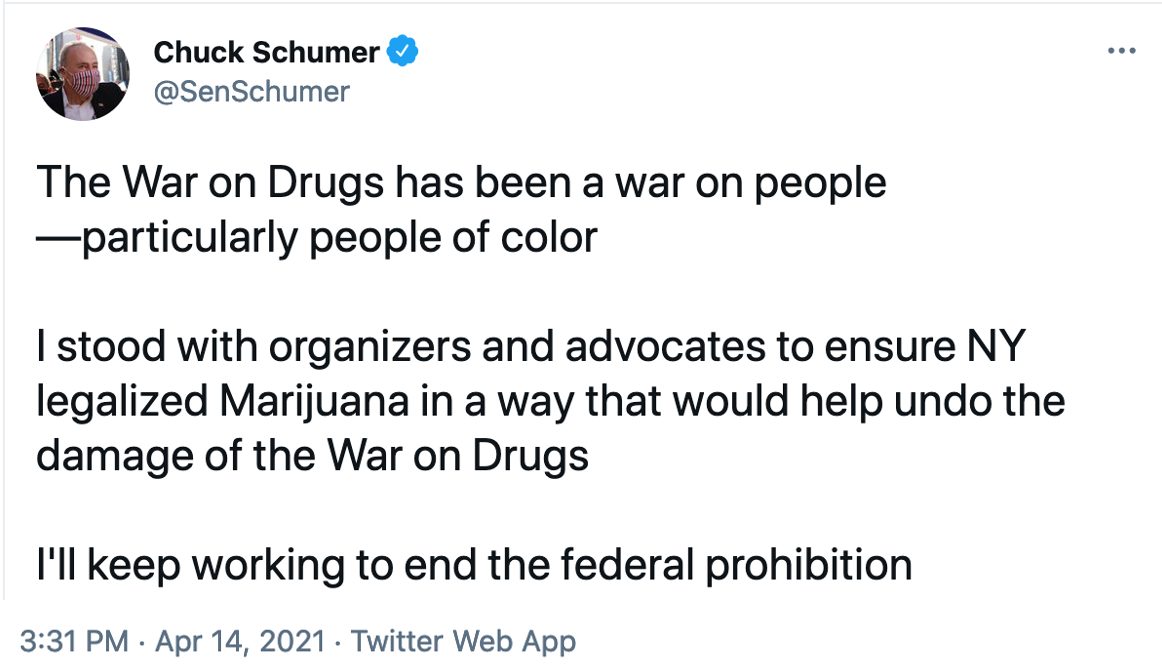 Two weeks ago, New York state legalized recreational marijuana. Across the country, the movement to normalize drug laws is barreling ahead like a freight train. Marijuana, LSD, magic mushrooms, and a host of other psychotropic substances are entering the socio-economic mainstream. Investors should increase their exposure to these segments now, while equity valuations are still reasonable.

How did the War on Drugs start, anyway?

The Controlled Substances Act (CSA) was passed in 1970, at a time when the raucous antics of the counter-culture prompted the Nixon White House to launch what it termed a “War on Drugs.” President Nixon used the War on Drugs as a cudgel to pummel his enemies.

Over the years, Nixon’s War on Drugs didn’t substantially curb illicit drug use, but it accomplished at least one goal: the mass incarceration of the poor, especially Black and Latino men.

Drugs, substances, and certain chemicals used to make drugs are classified by the U.S. Drug Enforcement Administration into five distinct schedules (i.e., categories) depending on the drug’s acceptable medical use and the drug’s abuse or dependency potential.

Schedule I drugs have no currently accepted medical use and aren’t considered safe to use even under medical supervision. They’re considered to have a dangerous potential for abuse and dependency. Marijuana falls into Schedule I, under the CSA.

States and other jurisdictions have continued to implement policies that conflict with federal law, beginning with passage of California’s Proposition 215 in 1996. During the 1990s, drug laws as a whole started to loosen.

Indeed, the current “green rush” traces its origins to 1996, when the voters of California agreed to allow patients and their caregivers to possess and cultivate marijuana for therapeutic purposes. Recreational use of marijuana became legal in California in 2018.

In recent years, former members of the Nixon administration have come forward to admit that the War on Drugs was a way for Nixon to persecute his political enemies (e.g., civil rights groups, minorities, the political left, and the anti-war movement).

Antiwar and black leaders routinely found themselves subject to investigations, surveillance, searches, and imprisonment for drug possession. They were demonized on the nightly newscasts and in television cop shows. Drug use continued nearly unabated but the prison population surged. Criminals and the Mafia made a fortune from illicit drug activity.

Now several members of Congress, including Senate Leader Schumer, want to put an end to the charade.

We’re witnessing the most pot-friendly political environment in American history. Several bills are pending in Congress that would remove federal restrictions on marijuana. Democrats tend to favor these bills and their party currently controls the White House and both chambers of Congress.

Investors should act now, before marijuana is legalized on a federal level. Marijuana stocks have been soaring lately in anticipation of Uncle Sam removing the handcuffs on Mary Jane. These equities have further to run. For our latest report on the best investment opportunities in cannabis, click here.