The legendary Chinese military general and philosopher Sun Tzu wrote: “Strategy without tactics is the slowest route to victory. Tactics without strategy is the noise before defeat.”

Whether on the field of battle, facing a corporate competitor, or trying to beat the broader stock market, victory in all these endeavors has not come from the size of the army, company or portfolio. The deciding factor has been strategy.

Your investment strategy should include inflation protection, which in turn should utilize small stocks. The rise in recent months of small stocks indicates that investors are euphoric about economic growth and also wary of inflation. The rally in the broader market and in small stocks continues.

In an overall inflation fighting strategy, many investors fail to incorporate small-cap stocks as part of the many tactics to preserve wealth. That’s probably because investing in small caps isn’t always easy.

Small-cap stocks are generally defined as having market valuations of between $300 million and $2 billion. There are thousands of small-cap stocks and even isolating only the bottom 20% of reasonably valued small-cap names with the lowest price-to-book ratios results in several hundred stocks, which can be daunting for investors.

But an investor who wants outsized returns must be invested in small-cap stocks. As the following chart shows, the small-cap Russell 2000 has outperformed the S&P 500 over the past 12 months, gaining 84.58% compared to 46.47%, respectively, as the economic recovery quickens (see chart). 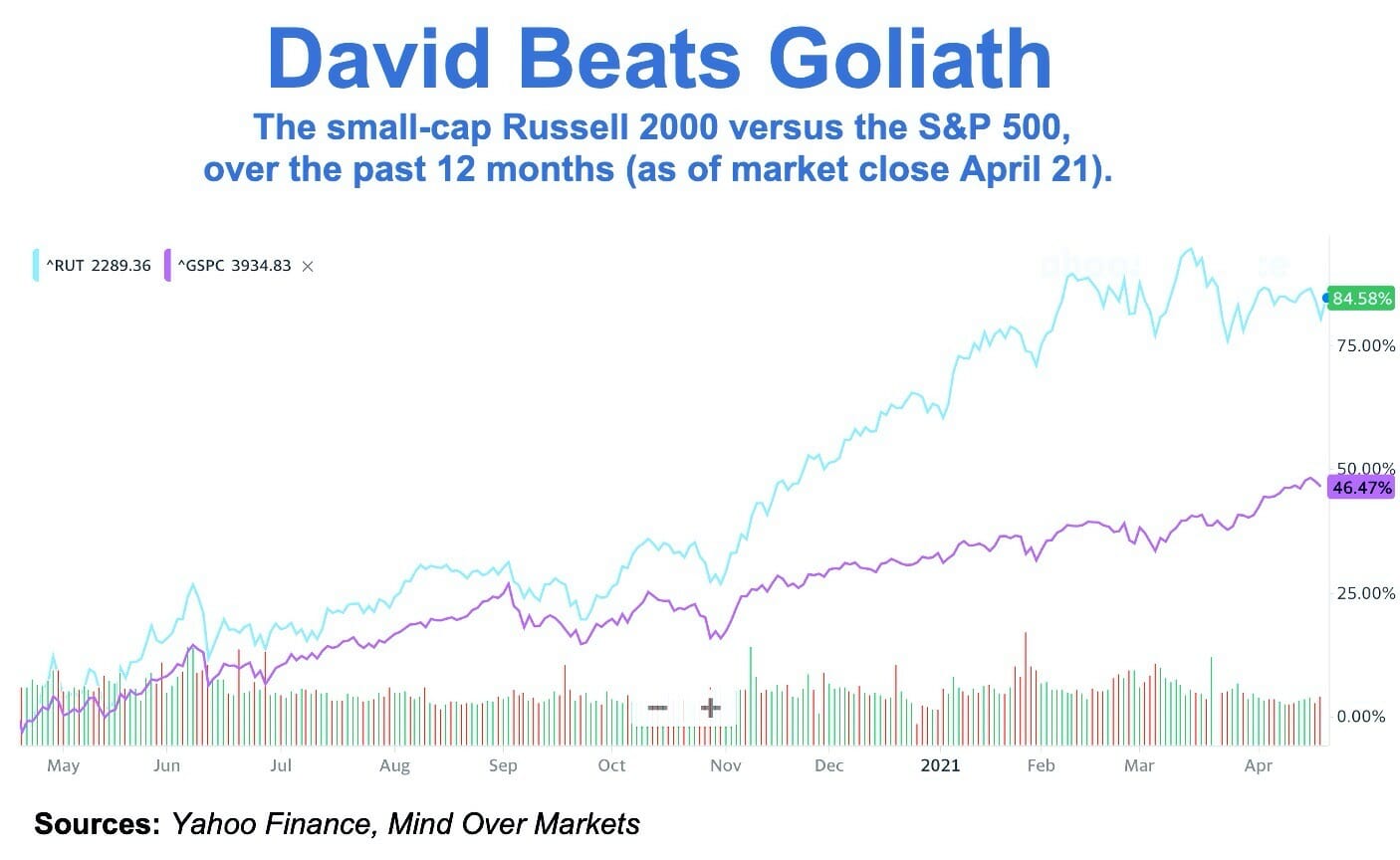 Failing to develop a small-cap sleeve in your portfolio can leave a major chink in the armor against inflation. Many of the top-performing stocks of the past decade were small caps and most were value stocks. These two asset classes also outperform large-cap growth stocks during inflation, which could be just around the corner.

Small companies excel during inflationary times because they typically offer unique products with few alternatives, so they have more leeway to raise prices than larger firms. They also can adjust pricing and behavior on the fly. A big company run by centralized management on a five-year plan isn’t as nimble.

The massive fiscal and monetary stimulus that has been implemented around the world to combat economic damage from the pandemic will inevitably come home to roost in the form of rising inflation.

But don’t get me wrong: I don’t think we face runaway inflation. I believe there’s too much slack in the economy to spark a serious (let alone double-digit) outbreak of rising prices. Unemployment has come down, but it still remains elevated and workforce participation is a long way from pre-pandemic levels. Wage growth is unlikely to gain enough traction to dramatically push up the cost of living.

Inflation projections for 2021 are reassuringly low. The Federal Reserve projects that core inflation, which excludes the volatile costs of food and energy, will run at about 2.2% in 2021, up from 1.6% at the end of 2020.

Don’t overreact to the inflation threat, but don’t get complacent, either. Take protective measures against modest inflation. One such measure should be to increase your exposure to bargain-priced small-cap equities.

Stick to small-cap companies with strong earnings growth. Given how volatile the sector can be, it’s probably best for inflation hedgers to pick a diversified index whose criteria focuses on the highest-quality names. And do it now. To quote Sun-Tzu again: “Every battle is won before it’s ever fought.”

Editor’s Note: If you’re looking for a way to stay bullish and at the same time minimize risk, you should keep an eye out for an exciting offer from Investing Daily. It’s “the next big thing” from our colleague Robert Rapier: a new trading service called Rapier’s Income Accelerator.

Even in the face of rising inflation and anything else the market throws at you, Robert’s trades are income-generating machines. Robert has devised a new, safe way to generate cash on demand. Click here for details.