In late January, I commented on the sudden rise of “meme stocks” such as GameStop (NYSE: GME). That month, GME soared nearly 20 times in value in just a few weeks.

Just as quickly, GME lost most of that gain in early February when industry regulators temporarily restricted trading in GameStop stock. Since then, it has recovered about half that loss.

Behind all that frenetic trading activity is a band of defiant investors attempting to upend Wall Street. Sharing a mutual commitment to the mantra of YOLO (you only live once), these investors refuse to give up.

The nickname YOLO conjures in my mind the iconic 1967 James Bond movie You Only Live Twice, except for these inherently risky trading strategies, there probably won’t be a second life.

Theater of the absurd…

During the past month, YOLO adherents once again banded together to induce a short squeeze on some of their favorite stocks. A short squeeze occurs when speculators that have sold borrowed shares of a stock short must start buying them back to satisfy margin calls.

In addition to GameStop, the YOLO gang has targeted movie theater operator AMC Entertainment (NYSE: AMC) as a short squeeze candidate. That effort appears to be working. A month ago, AMC was trading below $10. Last Wednesday, it shot above $62 to nearly double in value in a single day. Since the start of the year, AMC is up more than 3,000% 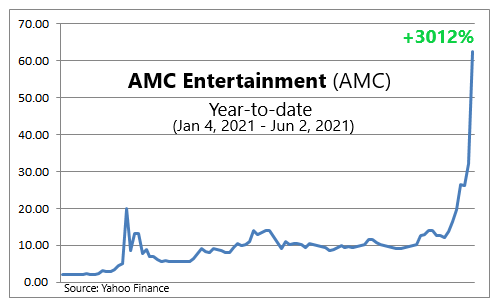 As you can see in the chart above, this is the second time that AMC has spiked higher this year. The first time, the YOLOers only managed to drive it up to $20. But now that they have street cred, a lot of other people are following their lead.

I hope those shareholders have a high tolerance for volatility. Keep in mind, AMC lost a lot of money last year when the coronavirus pandemic shut down movie theaters. During the first quarter of this year, AMC reported an 84% decline in total revenue compared to the same period last year.

Despite its recent problems, AMC was able to sell 8.5 million shares of its common stock to private equity firm Mudrick Capital last week at an average price of $27 per share. The $230 million of sales proceeds will be used to acquire assets and pay down debt.

That sounds like a pretty good plan. That is, assuming movie patrons return to theaters in droves later this year. If they don’t, AMC will end up owning even more real estate generating very little revenue.

We should soon know which direction the company’s fortunes will go. Unfortunately for AMC, the first wave of new movie releases for this summer does not include a sure-fire hit.

Speaking of James Bond, the next installment in the 007 franchise, No Time To Die, won’t be released until October 8. For now, moviegoers will have to content themselves with Cruella de Vil’s origin story or a 97-minute long movie that contains virtually no dialogue. Fingers crossed!

For that reason, we may see huge price swings in AMC from one week to the next. If early attendance figures for Cruella and A Quiet Place Part II are good, AMC could soar even higher. But if both movies are box office busts, AMC could hit the skids.

That’s why the company launched “AMC Investor Connect” last week. According to the company, it “allows AMC shareholders to self-identify through the AMC website and receive important AMC special offers and Company updates.”

In effect, AMC is using social media to communicate directly to its YOLO shareholders. As long as they remain in the fold, the company has time to rebuild its balance sheet. But if they bail early, the short-sellers may drive AMC into bankruptcy.

Normally, that type of scenario would make AMC an attractive candidate for a “long straddle” options trade. To do so, a call and put option using the same strike price and expiration date are purchased at the same time. A call option increases in value when the price of the underlying security goes up, while a put option does just the opposite.

For that reason, one of these options will benefit at the other’s expense. In fact, you hope that AMC moves so strongly one way or the other that one of the options becomes worthless while the other soars in value.

But there’s a problem. So many people are thinking the same thing that options premiums for AMC are very expensive.

Last week while AMC was trading near $62, the call option that expires on July 16 at the $60 strike price was selling for $36. At the same time, the $60 put option expiring on the same date could be had for $30.

The total cost of both options, $66, was greater than the share price of the underlying stock! That means that there is no way a straddle trade could be profitable if AMC declines in value over the next five weeks. This is one of those rare situations where options traders have to pick one outcome or the other and hope they guess right. That is not a smart way to make money in the stock market.

But I do know of a way to make money that works in all types of market environments. That’s where my colleague Jim Fink comes in.

As chief investment strategist of Velocity Trader, Jim has developed a proprietary investing method that consistently beats Wall Street at its own game, in markets that are going up, down or sideways. His “310F” trade is the most accurate way I’ve ever seen to double your stake in just three days.