The Eyes of Texas Are Upon Legalization

Recreational marijuana and psilocybin fungi (aka “magic mushrooms”) are banned in Texas. But recent developments in the Lone Star State suggest that legalization of both substances is on the horizon.

If gun-totin’, cowboy hat-wearin’, liberal-dissin’ Texas can legalize marijuana and magic mushrooms, it can happen anywhere. Proactive investors are profitably tapping the South’s increasing embrace of psychotropic substances, by focusing on canna-businesses that are based below the Mason-Dixon line.

The governor of Texas on June 18 allowed legislation that will require the state to study the therapeutic benefits of psilocybin and other psychedelics to become law without his signature.

The move on psychedelics is especially noteworthy because Texas Gov. Greg Abbott (R) is an avowed religious conservative. In late May, Abbott also signed a bill, during the final days of Texas’s legislative session, to expand the state’s medical marijuana program.

The psychedelics measure requires Texas health regulators to study the medical risks and benefits of psilocybin, MDMA and ketamine for military veterans, in partnership with Baylor College of Medicine and a military-oriented medical facility. The bill also calls for a clinical trial into psilocybin for veterans with post traumatic stress disorder (PTSD). The following tweet, posted June 21, summarizes the story: 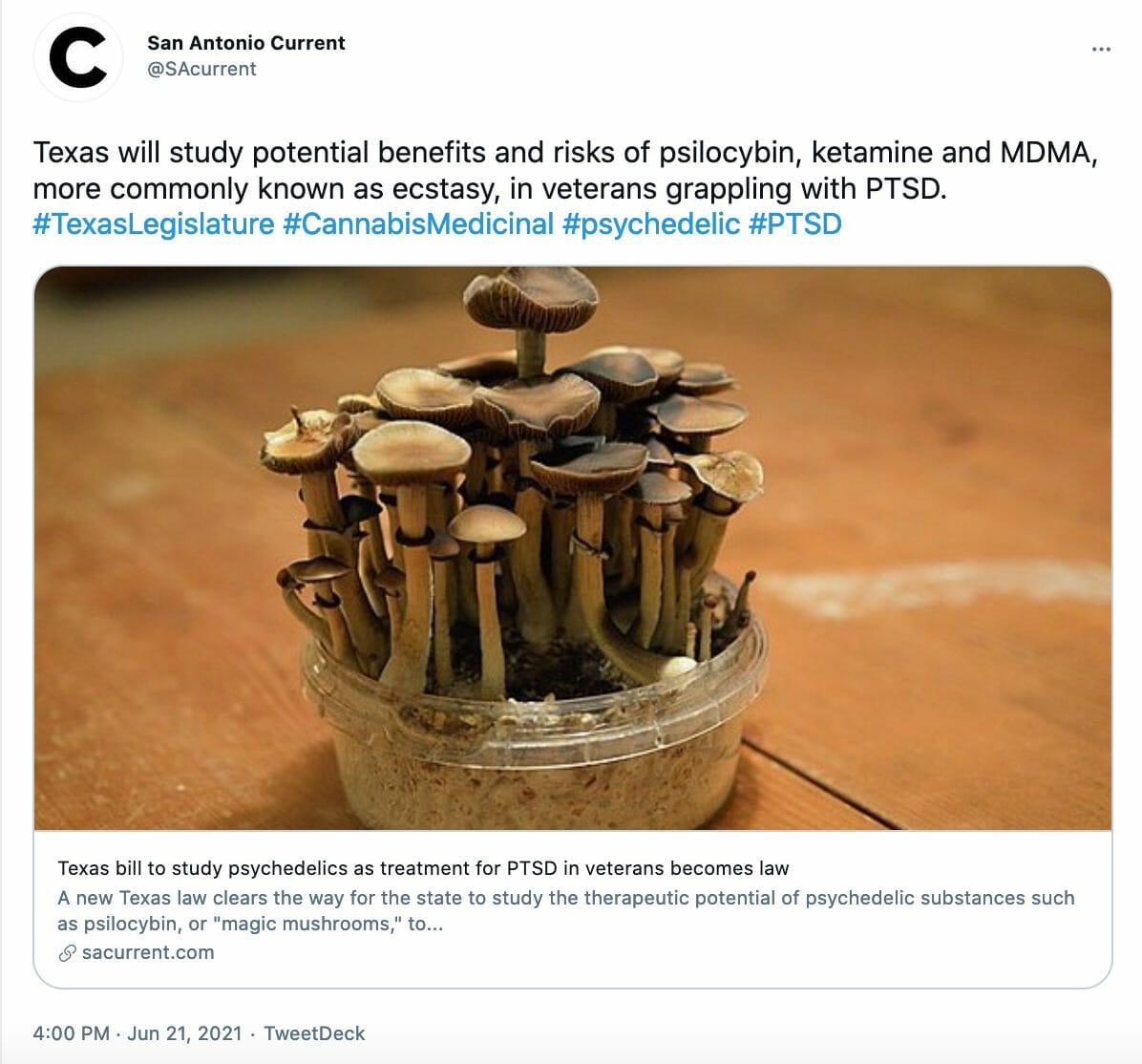 “Psychedelic medicine has the potential to completely change society’s approach to mental health treatment, and research is the first step to realizing that transformation,” Rep. Alex Dominguez (D), sponsor of the bill, stated in a press release after the bill was sent to Abbott’s desk.

The first step toward legalization?

Political observers in Texas predict that the approval of psychedelics for scientific review will pave the way for activists to get a legalization initiative on the ballot.

The separate marijuana measure signed by Gov. Abbott adds cancer and PTSD to the list of conditions that qualify patients for medical cannabis. Also, the legislation doubled the THC limit for marijuana products, increasing it from 0.5% to 1.0%.

The trend of “deep red” Southern states legalizing marijuana represents a cultural earthquake. Among Texas residents, 38% identify as conservative and only 20% say they’re liberal. Texas hasn’t voted for a Democrat for president since 1976 when Jimmy Carter narrowly beat Gerald Ford.

A notable exception in Texas is the state capital of Austin. Long famous for live music and barbecue, the city has evolved into a thriving hub for high-tech start-ups. Thanks to an infrastructure of educational institutions, government-subsidized incubators, entrepreneurs, and well-heeled investors, Austin is a pro-business city that also boasts a cool, hip lifestyle.

Young, well-educated people with libertarian instincts have flocked to Austin, to the point where the city has more in common with Cambridge, Massachusetts than Dallas or Houston.

Last year, the Austin City Council passed a resolution to stop arresting or ticketing people for possessing small amounts of recreational marijuana. For Texas, this move by Austin was a BFD.

At first, Austin Police Chief Brian Manley was hesitant to comply, but he eventually got on board, which means in Austin, low-level marijuana possession has been essentially decriminalized. The state’s first marijuana dispensaries are now cropping up Austin. At latest count, six stores sell pot in Austin.

I’ve visited Austin from time to time, and seeing retail storefronts selling marijuana in the city is, to me, an astonishing sight. Austin is a microcosm of what’s happening throughout urban centers in the Old Confederacy.

To be sure, cannabis in Texas remains banned under state law for recreational use. Possession of up to two ounces is punishable by up to 180 days in prison, a fine of up to $2,000, and the suspension of one’s driver’s license.

As for magic mushrooms, they’re also banned in Texas. Anyone found to possess, distribute, carry, or use shrooms in any way faces criminal prosecution that could include jail time.

That’s all likely to change, though, as empirical evidence of the therapeutic properties of marijuana and psilocybin starts to pour in.

Legislation allowing for medical use of marijuana in Texas was first approved in 2015. The efficacy of cannabis in treating veterans was a major motivation behind the state’s establishment of a medical marijuana program.

Veterans suffering physical or emotional distress are increasingly turning to medical cannabis as an effective alternative to opioids and other conventional medications. In addition to treating body wounds, marijuana is effective in treating depression. Veterans represent 7% of the American population, yet account for 20% of the national suicide rate.

As my article about Texas makes clear, the “green rush” is extending to all corners of America. That spells a money-making opportunity for investors. Looking for the best pot stocks? We’ve done the homework for you. For our latest research on cannabis investing, click here.