Snap quiz: During the 19th century San Francisco gold rush, which fortune hunter went on to achieve the greatest fame and wealth?

Okay, that was a trick question. The point is this: when the era’s gold-crazed prospectors flocked to the West Coast, like Bogie’s grizzled gang in The Treasure of the Sierra Madre, most of them came up with zip, zilch, nada. The people who really made money were the entrepreneurs who supplied the picks and shovels or, in Levi’s case, the blue jeans.

That’s why, during the 21st century marijuana green rush, I especially like the “pick-and-shovel” plays on the marijuana boom. These companies are infrastructure stocks that can be wildly profitable.

Marijuana investing can be risky, but you can seek greater safety by focusing on the ancillary firms that provide infrastructure services for growing pot, in either the recreational or medicinal segments.

Among marijuana infrastructure companies, some of the more promising firms deploy controlled environment agriculture systems that are designed to use as little land, water and energy as possible. They market themselves as eco-friendly as well as more cost-effective.

These companies have designed vertical farming solutions that use the latest pot growing techniques. Which brings me to one of the hottest trends in not just marijuana growing but all of agriculture: hydroponics.

An increasing amount of marijuana is being grown not in soil but in windowless warehouses, aka vertical farms. These futuristic growing environments manipulate light, humidity and temperature to grow cannabis. Added to the mix is nutrient-rich water, via hydroponics.

Hydroponics allows marijuana growers to grow better weed in less space and with less labor. Venture capitalists are excited about this trend and they’re pouring money into hydroponic-enabled vertical farms that grow pot. 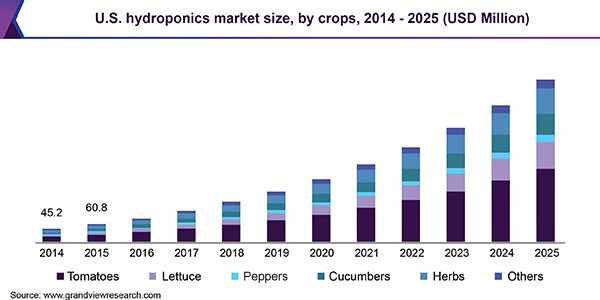 Data that breakdown the percentage of hydroponics specifically devoted to marijuana farming are elusive. But generally speaking, hydroponic operations represent the next generation of marijuana agriculture. They foster perfectly balanced growing conditions via artificial intelligence, data analytics and other sophisticated techniques. Technology companies that provide proprietary software for marijuana hydroponics are thriving.

These vertical hydroponic farms are emerging at an inflection point in global agriculture. Extreme weather events this year almost certainly would not have occurred if not for global climate change, a scientific group recently reported.

Whether the culprit for the rising incidence of scorching heat and “super storms” is man-made climate change or natural cycles, severe and unpredictable weather is a new global reality.

Pollution, overcrowding, urbanization, topsoil erosion, and the heightened frequency of droughts is prompting open-field farmers to seek technological solutions to growing crops. One of the advantages of hydroponics is that growing isn’t constrained by the weather or the seasons.

So far this year, more than 2,300 farms are growing hydroponic crops in the U.S. and their number is rapidly expanding. In 2020, $929 million was invested into U.S. indoor-farming enterprises, more than double the level of investment in 2019, according to the latest data from PitchBook.

These new systems produce sanitary marijuana and other crops, without pesticides. Welcome to the Brave New World of ag-tech.

Under the technological and economic conditions that I’ve just described, cannabis investments confer market-beating potential and they’re a must for your portfolio. But the key is finding the right pot stocks. You need to conduct due diligence.

We’ve done the in-depth research for you. If you’re looking for a future cannabis bonanza, click here for details.