Consumer Sentiment Drives Off a Cliff

At the start of this month, I discussed the impressive rise in consumer confidence this year. I noted that in July, the Consumer Confidence Index reached its highest level since the onset of the pandemic.

However, I also warned that a change in direction in consumer confidence could spell trouble for retail stocks. When consumers are feeling confident about their job and the overall economy, they tend to spend more money.

But when that confidence starts to fade, consumers will put off large purchases and spend less money on discretionary items. A few days ago, we got some disturbing news about consumer confidence that could portend a change in direction for the stock market.

The University of Michigan released the preliminary results of its survey of consumer sentiment for August. The index fell from 81.2 in July to 70.2 this month.

Not only is that a big drop from the previous month, but it is lower than the number for last August. That means consumers are feeling less confident now than they were a year ago before we knew that vaccines for COVID-19 were on the way.

That result is so startling that I can’t help but wonder if it is erroneous. Sure, some decline in confidence may be warranted due to the recent spike in COVID-19. But a drop of that magnitude suggests that something more serious than that is at work.

A stunning loss of confidence…

I can’t figure out what has consumers so worried. We’ve known for several months that inflation has been running hotter than normal. So far, that hasn’t derailed the stock or bond markets.

We’ve also known that the COVID-19 Delta variant was wreaking havoc overseas before it took hold in this country. What is happening now should not have caught anyone off guard.

Also, the most recent employment numbers have come in better than expected. In July, over 900,000 jobs were added to the U.S. economy. At the same time, the unemployment rate dropped to its lowest level since the onset of the pandemic in March 2020.

The authors of the study admit to being stumped by the “stunning loss of confidence in the first half of August.” They also note that it was “widespread across income, age, and education subgroups and observed across all regions.”

The report concludes that the big drop in confidence is most likely an emotional overreaction to the resurgence of the pandemic. We’ve all put up with it long enough and don’t want to go through another round of quarantines and social distancing restrictions.

Regardless of the precise reason(s), if the survey is correct, then retail stocks could be in for a rough stretch. We may be nearing the end of what has been a remarkable run for the sector.

Over the past 18 months, the SPDR S&P Retail ETF (NYSE: XRT) is up 138% while the SPDR S&P 500 ETF Trust (NYSE: SPY) has gained 48%. And most people think tech stocks were having all the fun during the pandemic!

In my prior article, I discussed buying a put option on XRT to profit from a drop in consumer spending. A put option increases in value when the price of the underlying security goes down.

I still believe that is the safest way to bet on a reversal in consumer sentiment. The fund owns over 100 stocks, including all of the major retailers.

However, that diversification also limits the upside potential from buying a put option on XRT. Certainly, some of its individual holdings will fare considerably worse than others.

I think one of those companies is CarMax (NYSE: KMX). The used car market has been hot lately. A shortage of semiconductor chips has delayed the production of new cars, thus driving up demand for used cars. This year, KMX is up 35% compared to a 20% gain for SPY. 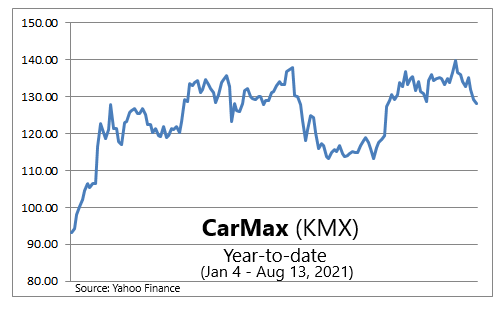 The imbalance in supply and demand resulted in record revenue and earnings for CarMax during the quarter ended May 31. The company is scheduled to release its next set of quarterly results on September 30 for the period ending August 30.

If consumers really are feeling a lot less confident this month, the pessimism should negatively impact used car sales. In that case, the industry analysts on Wall Street may start downgrading their price targets for CarMax.

Last week while KMX was trading near $129, the put option that expires on October 1 at that strike price could be bought for $6.50. For that trade to be profitable, KMX must fall 5% within the next 10 weeks.

It could fall much further than that. Two months ago, KMX was trading 12% lower than it is now. If it falls that far by the expiration date, this option could more than double in value.

Steady income, with a hedge…

Betting on changes in consumer sentiment can be profitable but it’s also quite risky. As we just witnessed, the numbers can change drastically from one month to the next for no apparent reason.

That’s why you should keep it simple, by investing in safe, high-yielding dividend stocks. After months of painstaking research, our investment experts have unearthed five of the best.

These five buys boast “bulletproof” balance sheets and they’ve weathered every dip and crash over the last 20 years. One of these companies hasn’t missed a single dividend since Richard Nixon was in office…and it’s still a buy! Click here for details.